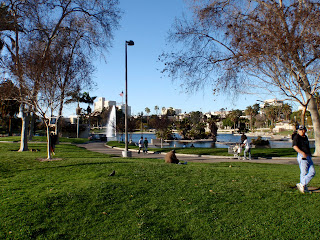 Here is MacArthur Lake Park today, known to my Grandfather Glessner and mom, Peg Glessner as West Lake Park. The tall white building in the back was known as the Elks Temple on the M Kashower Co Los Angeles Post Card that Len Glessner sent to his son, Harry C Glessner in 1929. 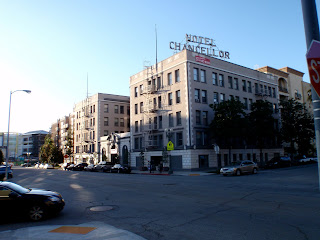 Here is the Hotel Chancellor at 7th and Berendo, not far from Wilshire and Vermont. I walked here from West Lake AKA MacArthur Park today on a bright and sunny day. Here is where my Grandfather Glessner stayed in 1929 when he wrote a card to his daughter Margaret who was then an 18 yr old freshman at Oberlin College in Ohio. Today it has been converted into a condo.
Posted by Thomas Glessner Weaver at 9:28 PM 6 comments: 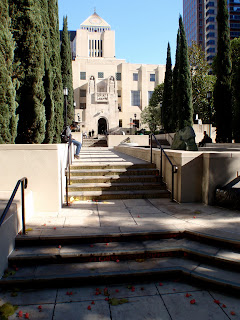 I left Woodland Hills around noon and then took the Red Line to Pershing Square in downtown LA. It was a short walk on a clear blue sky day up the hill on 5th to the Main LA Library. What I nice facility. Taking the escalator to the fourth floor basement in the Tom Bradley Wing, I was led to the City Directory and found the location of the Chappelear relatives and where they lived around West Lake Park which is now called MacArthur Park. Henry Chappelear,in 1916 was living at 2004 7th Ave in LA, Levi Ross at 628 S Westlake Ave and Ross Holmes, with brother Oliver Wendell with their mom, Matilda, aka "Tillie" at 450 Grand View. I went to all the locations and found that the homes have changed quite a bit. Very much a Latino neighborhood. 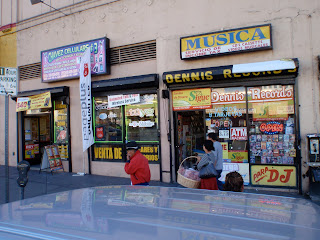 The Musica Store is at 2004 7th, listed as the address for the home of Henry S Chappelear who is listed as a watchman in the 1916 LA City Directory on p541.
Posted by Thomas Glessner Weaver at 8:52 PM No comments: 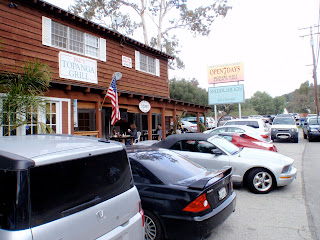 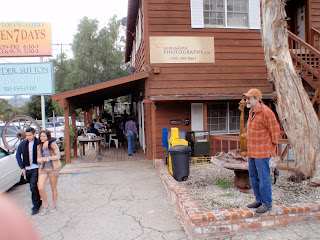 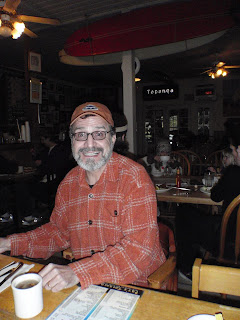 Here is Steve sitting at our table prior to ordering our breakfast. Fun being here and sharing stories and then Steve introduced me to the owner, Pat, who has a passion for fighting the local brush fires in a good way. He wants the bureaucrats (seemingly mostly dysfunctional with a lot of "meetings" that he think led to the 2 deaths of firefighers during the last local fire) 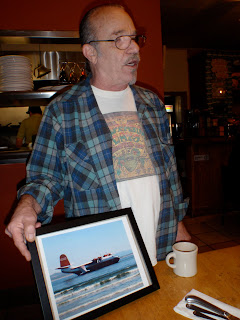 Here is Pat, with a photo of one of the "scooper" planes that in his view are more effecient and less dangerous that he hopes some local group will buy.
Posted by Thomas Glessner Weaver at 1:20 PM No comments: 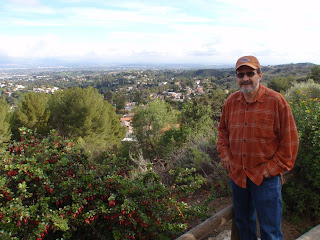 Here is my friend Steve Basil, sharing the overlook to the Valley on the Topanga Canyon Road to Woodland Hills. We are on our way to breakfast, my first day here after my arrival last evening at LAX. Thinking about the air quality here since the "car dependency" era began. My Chappelear and Glessner relatives, reflected in the post cards of Peg's collection, reflect the times of train and tolley travel here, in the 1910's - 1930's,when the air was pure, the orchards were prevalent. I hope to find the places in LA where they lived during that time during my research at the LA Central Library tomorrow. 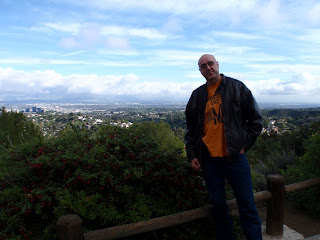 Here I am at the same overlook this morning. Thanks Steve for your kind companionship and welcoming to California.
Posted by Thomas Glessner Weaver at 12:53 PM 1 comment: 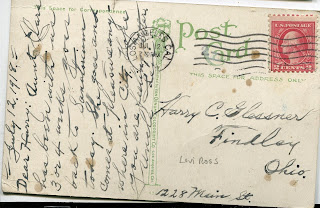 Levi Ross married Mary Chappelear older sister of Emma Chappelear Glessner my great grandmother. Levi is thought to have been born in 1835, he claimed to be 83 in 1918. Clara is thought to be Clara Ellen Evans Chappelear who married Henry Stewart Chappelear son of WW Chapplear, 9/14/1869 in Bloomington IL, and died 1926 in Los Angeles CA.
Posted by Thomas Glessner Weaver at 5:14 PM No comments: 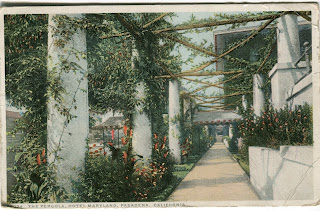 Postmarked May 1, 1918 Los Angeles CA to Mr Harry Glessner 1028 So Main, Findlay, Ohio. "May 1st Do you remember how beautiful Hotel Maryland is in Pasadena. Had a fine 70 mile ride after dinner the other night - all paved blvds -getting home about ten A long letter from Ross telling much of interest - will try to send you a copy. Is well and getting fat - Hope you are getting fat too - Frances 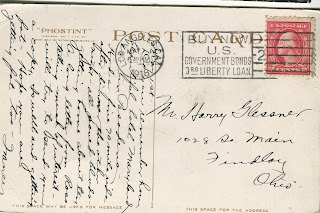 My sense is that Frances, is FRANCES SMITH, daughter of Harvey Jerome & Aramintha (Chappelear) Smith, born 01/13/1879, Sedalia, MO. She married Alva C. Lee. Harry Glessner is my grandfather who died at age 88 in 1973 in Findlay Ohio.
Posted by Thomas Glessner Weaver at 4:40 PM No comments: 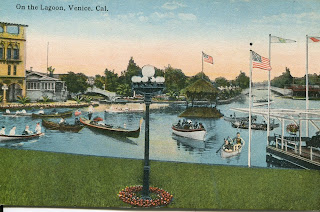 This one with the name of on the back was never sent as well. 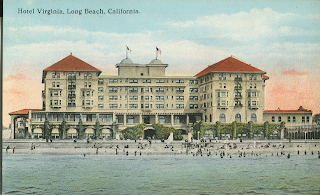 During the last years of Peg's life, she told me of her post card collection was a big part of her early years. She had names of friends on the back of some of these cards from the beach areas around LA. This one was never sent.
Posted by Thomas Glessner Weaver at 6:19 AM No comments: 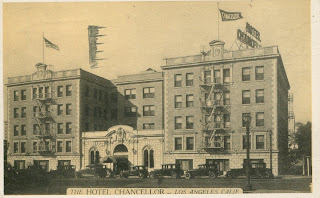 Postmarked March 13 1929 Arcade Station Los Angeles. Hotel on Corn Berendo and 7th, one block off Wiltshire. Addressed to Miss Margaret Glessner, Grey Gables Oberlin College, Oberlin OH. "Train on time. Aunt Mary and Grandfather met me. Grandmother is feeling fine. Have a room on the same floor as the folks. Weather here not so bad. Dad" 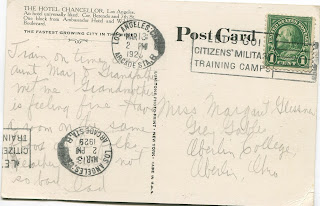 I remember Harry and Inez loved to stay in hotels. For their 50th anniversary they booked rooms for my parents and my brothers and me in Chicago, I think at the Palmer House in the late 1960's when I was playing basketball for Carleton. I remember flying there and then to Fond du Lac Wisconsin to hitch hike to Ripon WI for the game at Ripon College, the town where I recall the Republican Party was founded back in the day. (Trivia huh)
Posted by Thomas Glessner Weaver at 5:52 AM No comments: 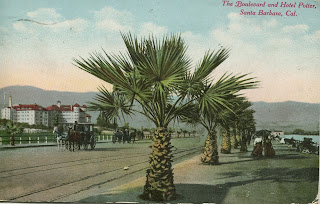 www.scottwilliams.com/he/pages/section1/section1_Hist_HopeRa
From In 1904, the 360 Palms were planted along Las Palmas and Marina Drives. In 1902 the 600-room luxury Potter Hotel opened with a green, nine-hole golf course near Laguna Blanca. The Potter's opening ended plans for another Hope Ranch hotel and home site sales proceeded. The Pacific Improvement Company decided to hire real estate agent Harold Chase. In 1908, he spearheaded the effort, but it was so far in the country in horse and buggy days that it failed to attract buyers. Full-scale lemons, walnuts, hay, grain and lima bean farming continued.
The Potter Hotel's failure prompted the golf course closing in 1914. Then, in 1919, the Pacific Improvement Company sold out to an East coast financier, Maurice Heckscher. He attempted to auction off the ranch as 50' by 100' lots. Fortunately, when the auction didn't produce the desired response, Heckscher sold 835 choice acres to Chase, who then promoted the area as a suburb for upper-income people. More roads were built, wells were drilled, an additional 1200 acres were purchased to create Hope Ranch Annex, and estates began construction. Chase put his stamp on the modern Hope Ranch for the next 40 years.
Posted by Thomas Glessner Weaver at 5:43 PM No comments: 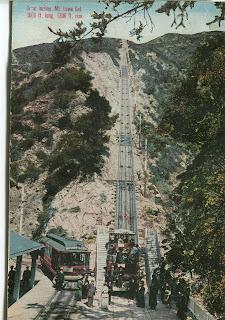 Dated July 10 1918 Addressed to Harry C Glessner 1228 S Main St Findlay OH "Dear Harry, This is my 83rd birthday month and the weather is ideal. Wish all 'you all' were here to enjoy it with us. All is war and -- Germans keep mum. Our brave Yankee boys will carry the war right into Berlin and bring the beast to his knees." (No signature, discerned by his handwriting to be that of Levi Ross) 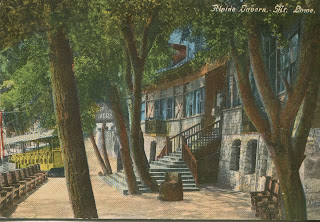 Here is the card postmarked Apr 3, 1920 Los Angeles 3 CAL to Mr and Mrs H C Glessner 1228 South Main St, Findlay OH from Emma C Glessner "Dorothy is in the city today ------going----to the park to meet her Aunt Lillie- Julia and the boys are going too----San Bernadino---and go up to Mt Robido (sic) for coming Easter service. Mother "
From www.mtlowe.net
" At the turn of the 20th Century, Rail Power was the dominant means of transportation. Professor Thaddeus Lowe, who moved to Pasadena in the 1880's decided to make use of the rail lines to build a special Railway, a Hotel, and a Tavern in the mountains. The history of Mt. Lowe can be read in some of the articles contained in these pages.
Against many odds the vision of Mr. Lowe, a former Ballonist in the Civil War, (appointed by President Abraham Lincoln), came to reality, and the world witnessed on July 4 of 1893, the opening of the Echo Mountain hotel at the top of the Great Incline. About 2 years later there would be another building, the Alpine Tavern, built higher up at the foot of Mt. Lowe along a trolley route. People ventured from all corners of the earth to see for themselves, and take a ride on the "Railway to the Clouds". This one act created a phenomenon that put Pasadena on the map and became world famous."
Posted by Thomas Glessner Weaver at 4:57 PM No comments: 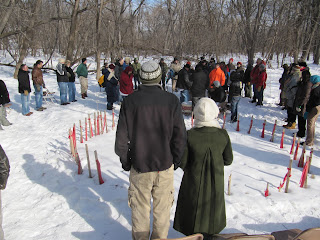 Here is a photo of the group that met, Saturday noon Jan 30 below Ft Snelling to honor the Dakota ancestors that died during the winter of 1862-63 in the concentration camp below the fort. My son Jesse and his girlfriend Amy joined the circle this year.
Thanks for all those who came to pray and honor them and those who were willing and open and could not make it. Mitakuye Oyasin. We are all related.
Posted by Thomas Glessner Weaver at 4:58 AM No comments: 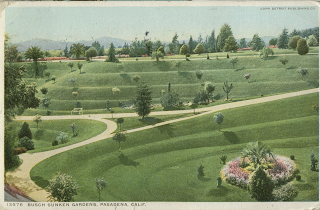 Postmark Apr 24 1918 "Dear Harry, Do you remember seeing these wonderful Busch Gardens when here? Have not heard from Ross for ten days. Last letter written March 21st day the drive started. Going to take about a 70 mile drive this eve after an early dinner Wendell had an accident with his car out in the country Sunday - we go for it tonight. How is everybody? Frances"
Mailed to Mr Harry C Glessner 1028 So Main, Findlay Ohio

en.wikipedia.org/wiki/Pasadena,_California "en.wikipedia.org/wiki/Pasadena,_California "The first Busch Gardens was in Pasadena. It opened in 1905 and closed to the public in 1937. During its time, it was one of the major tourist attractions in the Los Angeles area and offered many unique gardens and fairyland landscapes and structures. It was used as a location for several Hollywood motion pictures. After 1937 and the Second World War, much of the land was developed for homes. Close inspection of the area can still reveal many of the original river rock walls and structures"
Posted by Thomas Glessner Weaver at 5:46 PM No comments: 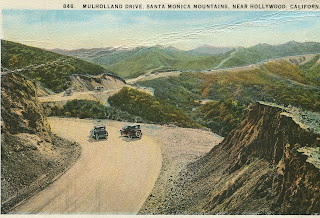 Postmarked Apr 1, 1926 Los Angeles Calif Arcade Sta 6 "This is where we drove Sunday PM with Mr and mrs Lotz. It was a wonderful drive and of course the picture doesn't do it justice. Have some views of Riverside for your ?forkahos? (sp?) Love from Mary" Addressed to Harry C Glessner c/o Glessner Company Findlay Ohio
Posted by Thomas Glessner Weaver at 9:16 PM 1 comment: 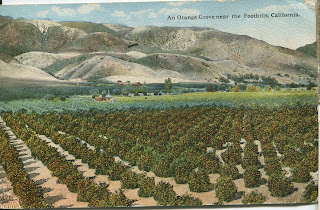 Postmarked Jan 3, 1918 Los Angeles Cal. "Dear Harry, A cheerful New Year greeting with a sincere wish that you may regain your health and enjoy a happy and prosperous New Year. From all to all. Affectionately, Uncle Levi " (Levi Ross, married to Mary Chappelear, who was a teacher and supplied genealogy to George W Chappelear. Addressed to Harry C Glessner 1028 S Main St Findlay OH
Posted by Thomas Glessner Weaver at 9:06 PM No comments: 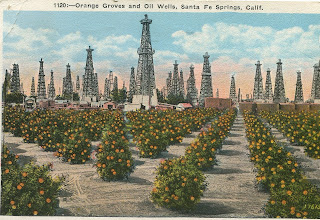