Noah Elwood Weaver, often written as NE Weaver, as his father was simply Noah Weaver, was born in 1885 on the family farm above Miamisburg Ohio.   His legacy is his photography!

Since his death in 1973 in Dayton, I have continued to be curious about his life, and his times.   He did not write of his experience, other than in an occasional letter to relatives like his only child, Paul Henry Weaver, my dad, who was born in a home on Main Street  in December of 1910.   I will be giving this album to Wright State University.  In communication with Dawne Dewey of Wright State, she remarked, they house many archives of the Miami River area.  And that housing his photos there is a good fit for their mission.

Now,   I am identifying as much as I can, prior to visiting there in June.   My want it to meet with folks of the West Carrollton Historical Society and the Miamisburg Historical Society, as the Weavers and Gebharts, (my heritage) are big part of the early history of the area.  I am calling this the "1908 Black Album of NE Weaver", and will write about some of the highlights here.  I plan to continue the conversation in Ohio, with relatives and archivists, such as cousin, Jeannette Allen Weaver of Troy,  Cousin, Andy Snow of Dayton,  Terry Neuberg and Sarah Allison of the West Carrollton Historical Society as well as Dawne Dewey and other Archivists on staff at Wright State University.  My plan is to arrive Sunday June 1, and be in the area of meet.  My want is to have enough of the images cataloged, so as to have searchable on line, names to direct folks to WSU and the local historical societies, to encourage family history and story telling in a good way.
Please contact me by email, if you want to meet during my trip....and comment below.  thanks 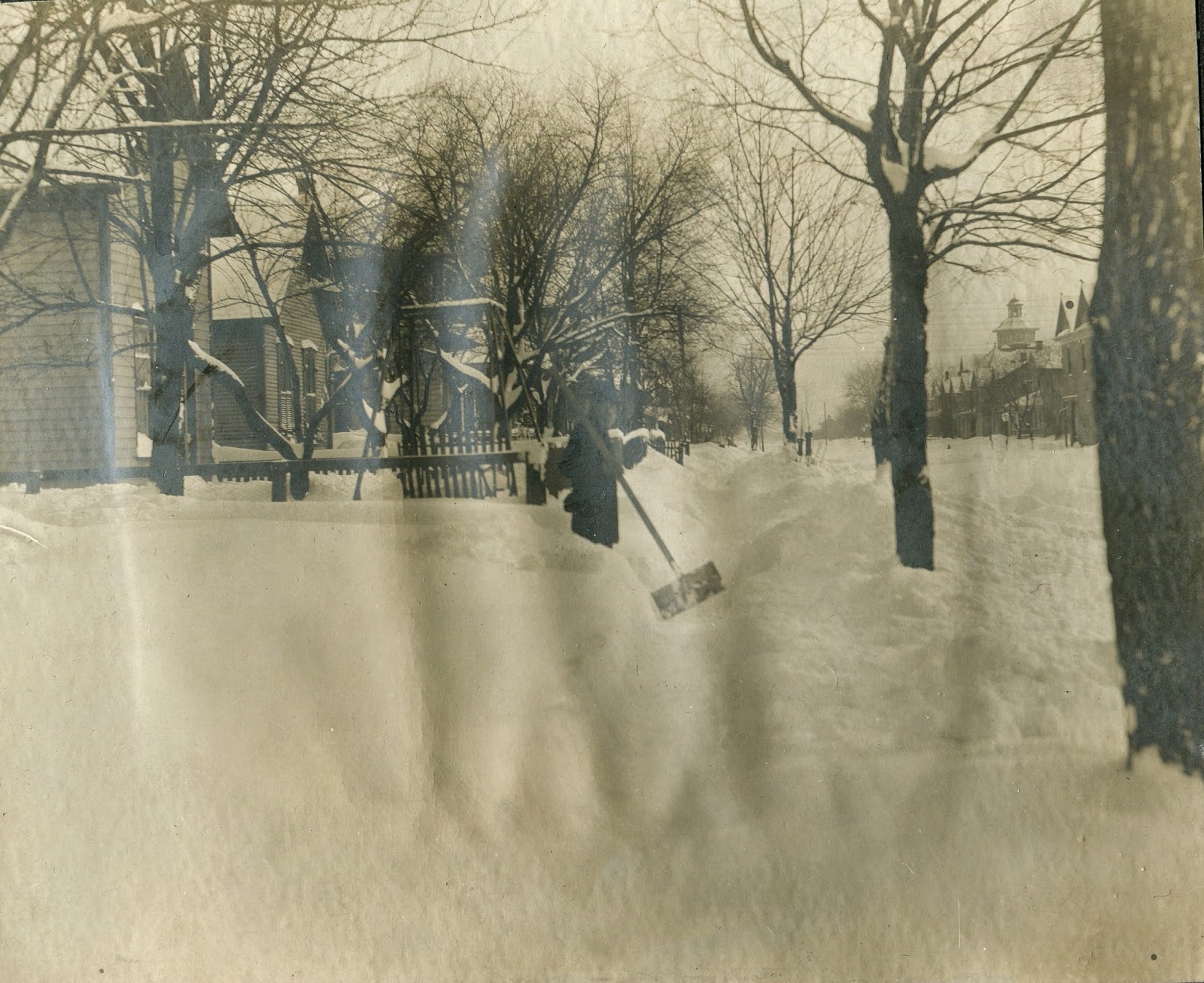 Here is the first photo, page 1, of the 1908 album. An unidentified shoveler on Main Street, looking north I think. Perhaps at 137 Main.    My research has NE Weaver living in Miamisburg through 1907 while he commuted to Dayton to work at NCR as a clerk and stenographer.  In 1909 he married Edna H Eicher, with their marriage license, Aug 19, Montgomery Co of that year.   There are no labels on these photos, and the 1910 Census has Noah E and Edna living at 137 Main Street in West Carrollton.   I see the Methodist Church in the background here.  Andy Snow, features the church on page 68 of A Flood Of Memories 1913 Flood, the book published in 2013 by the Miami Conservancy District See http://www.miamiconservancy.org/about/news2013.asp
I look forward to visiting Main Street with some of the locals to verify this location. 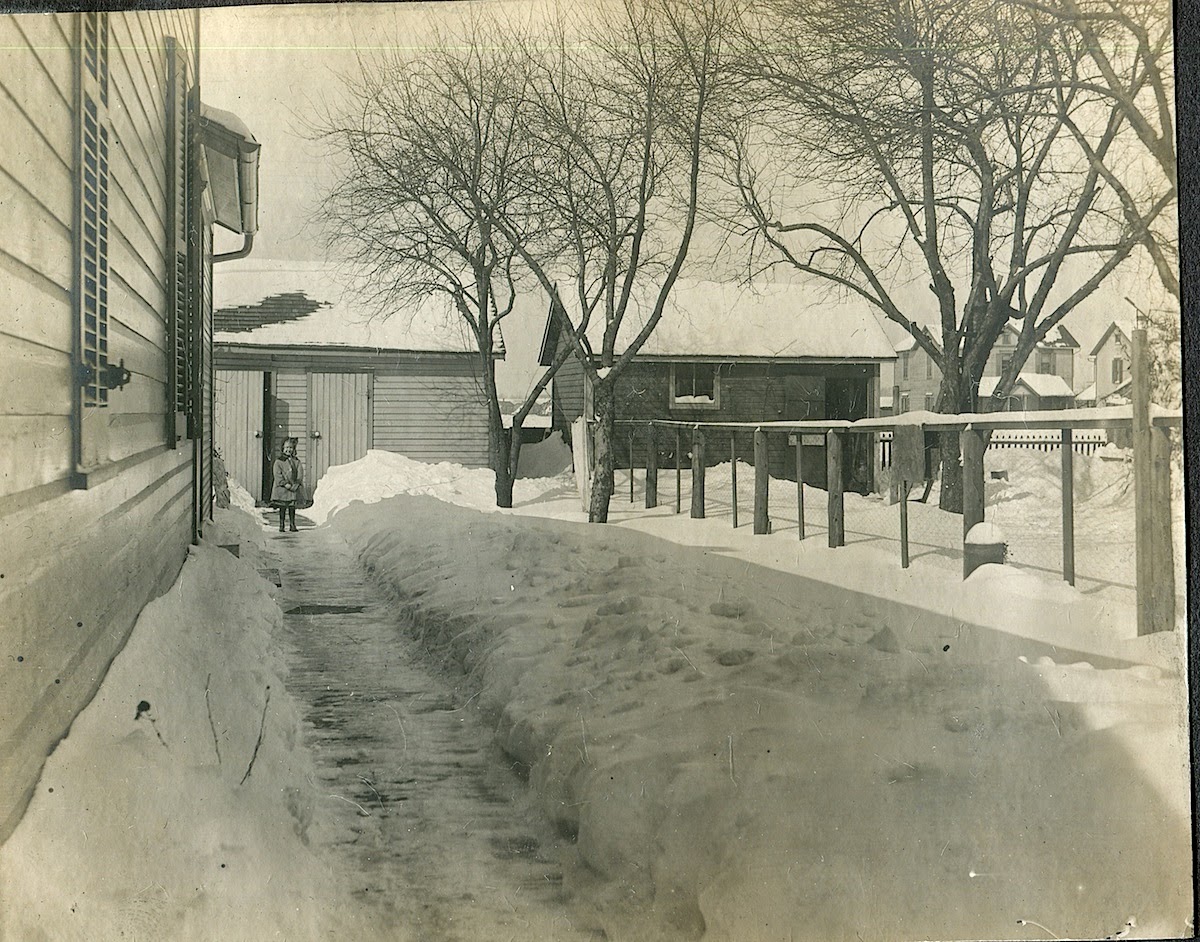 Here is page 2, with a neighbor girl with the snow being shoveled. Who might this be?  The Census Data from 1910 might give us a clue who this is, as Noah and Edna I think rented a corner home prior to the birth of my dad. See below... 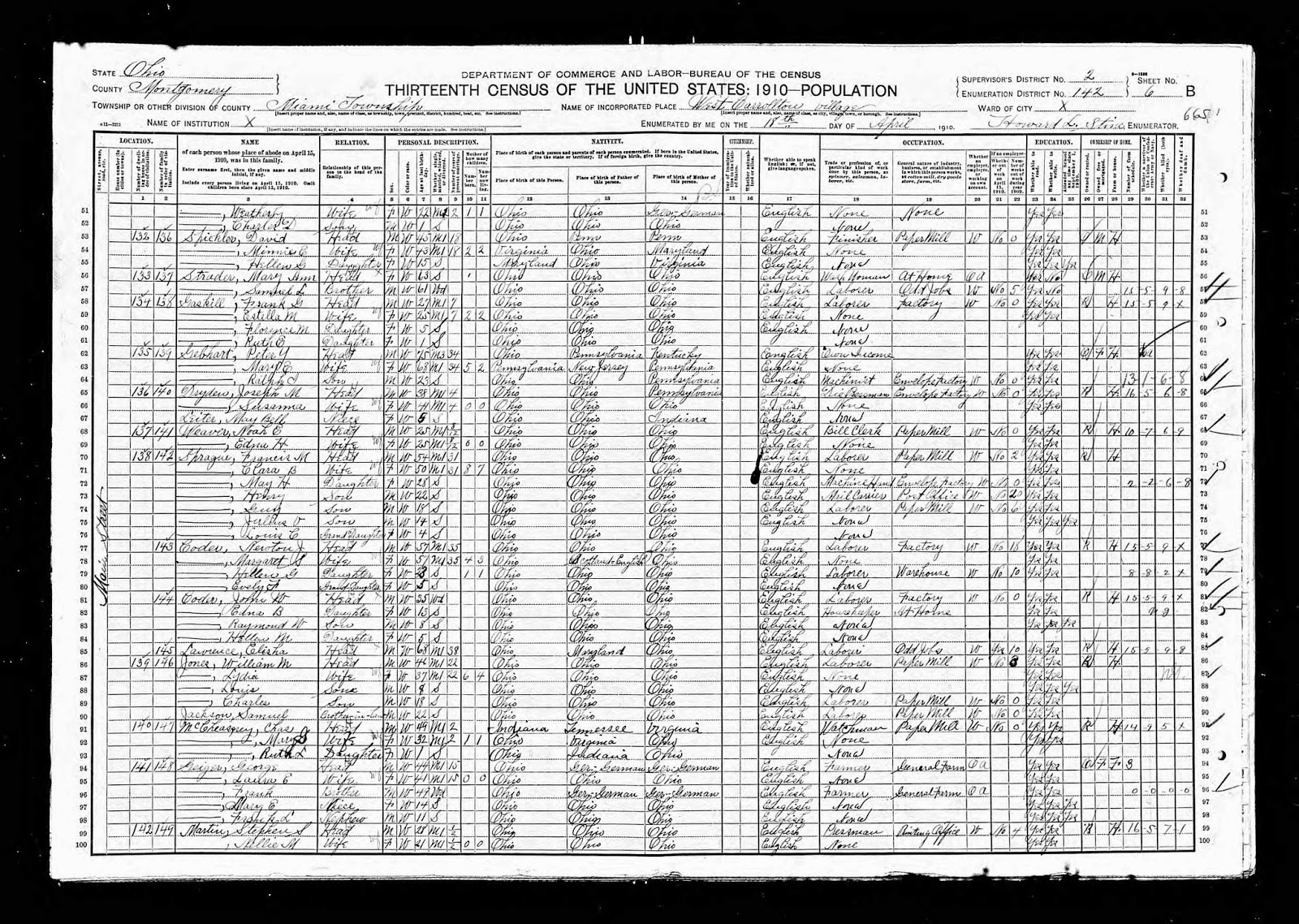 Note 137 Main Street and the names of Noah E and Edna H Weaver. Who might the neighbors have been and the girl in the photo?  Two years later?  Any help with the search is greatly appreciated! 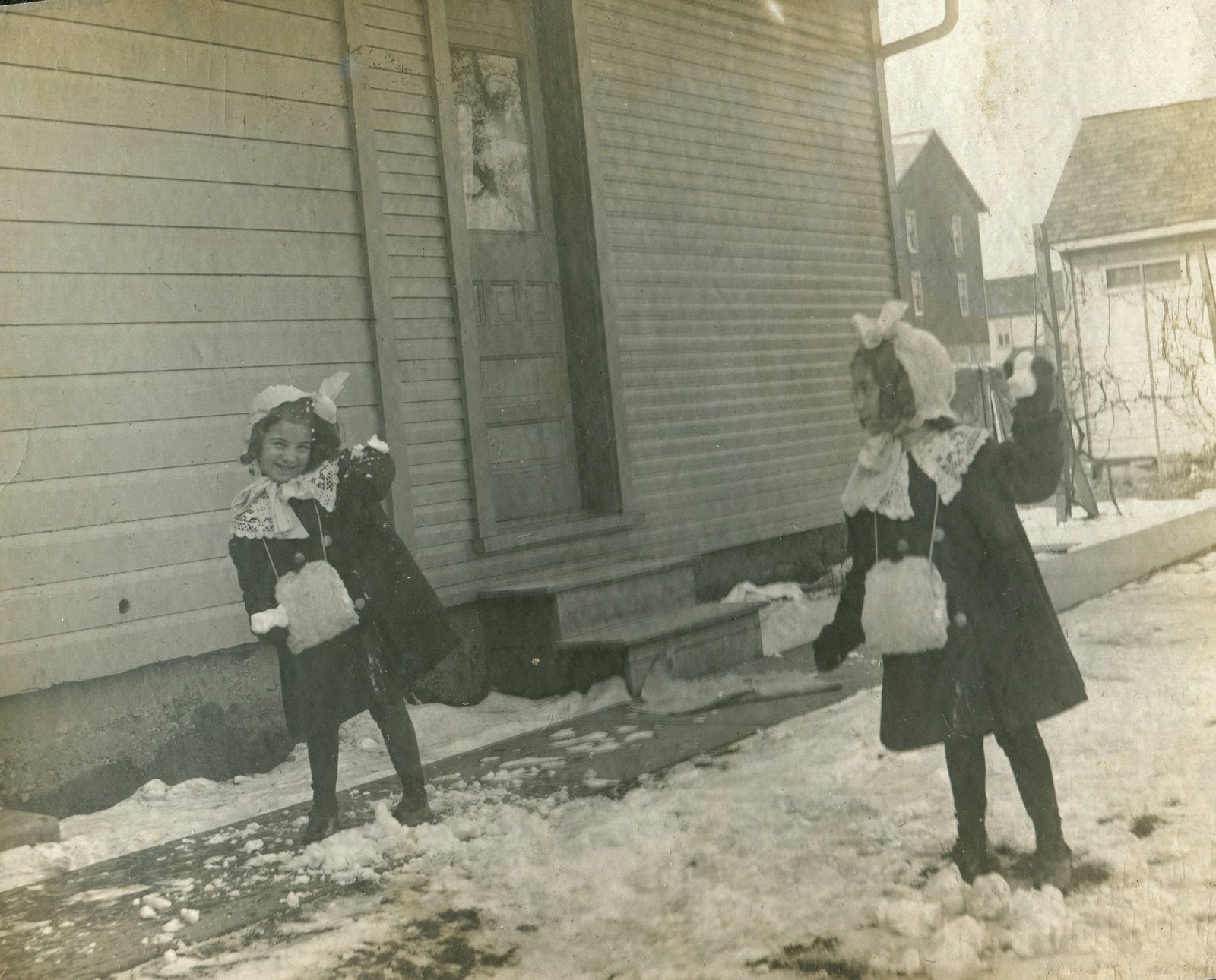 Same girl in the above photo.  On Page 3 of the 1908 Album by NE Weaver.  I see this having a sense of humor and likely something he created in the darkroom with double images.   Any comments are very welcome.  Thanks... 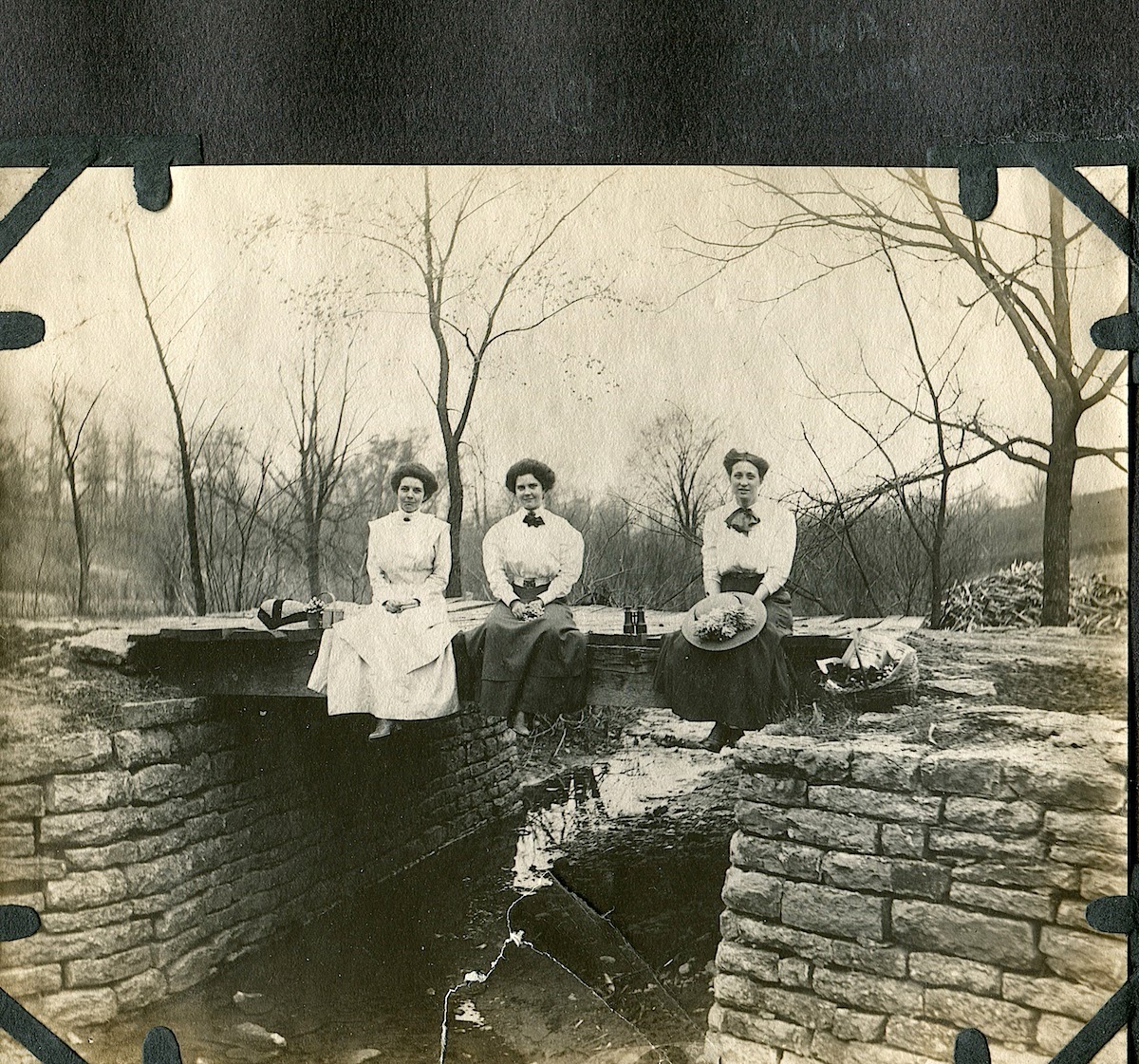 Page 4 of 1908 Album.  Three young woman with Edna Helena Eicher on the right.  Notice the binoculars on one side of Edna and the basket on the other.  I recall this may be part of the of the old Erie and Ohio Canal System.Edna was a school teacher in the country schools in Montgomery County. 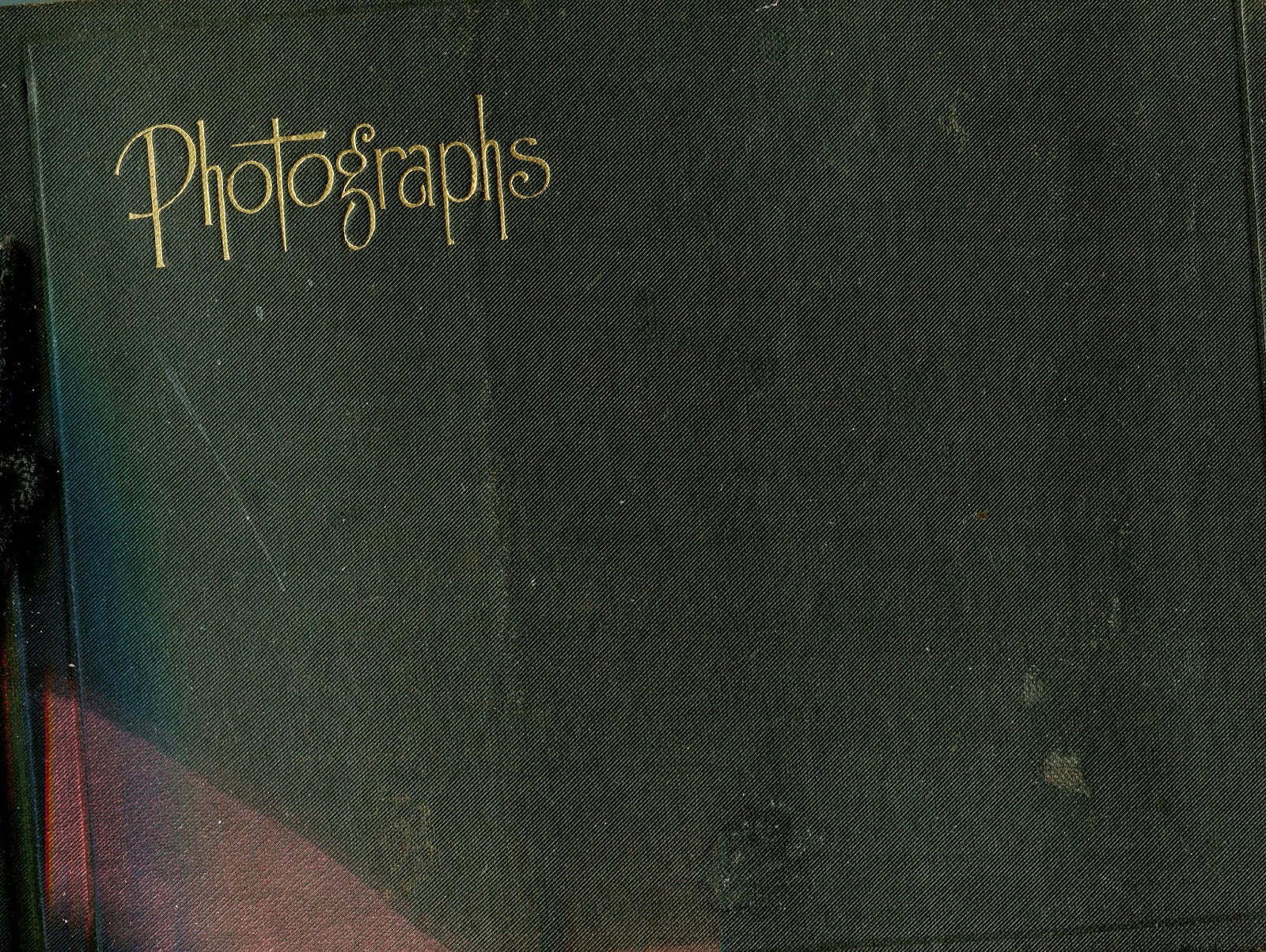