2016 - Visioning and taking in Hawai'i in Four Islands

Reflecting on my summer adventure to Hawai'i and came to the understanding today, while trying to capture the essence of this amazing learning adventure, that I had not stopped to post anything during the trip here, only some photos on Facebook -  When I heard that my nephew, Charlie, youngest son of my twin brother, tehanshi Gary Engler planned to have a social wedding celebration in Hawai'i I just knew I was "in" to witness it and I could not miss the chance to complete all 50 states to visit in my lifetime!  Never imagined how my life would unfold, and voila, aloha, here I am visiting the Hawai'an Islands and learning about the geology, with indigenous history here and witnessing a wedding of two families, the Engler Family from Minnesota and the Saito Family from Fukoshima Prefecture Japan ------

Now dropping into being present to my experience and living in the moment at that time - I will employ this as an exercise in writing up on the cloud, as it were, to sort this out writing my solstice letter, well, why not share the highlights as I might offer them in a memoir, like that my mom, Peg Weaver wrote in her Rememberings of an 83 yr old grandma, self published in 1993  -   new tools in a new century, perhaps others might enjoy my musings on the cloud, new beginnings in the cloud, the pahiya oyate My first host, Joyce taught me how to select my first Airbnd right in the Puna lava fields where I centered my entire trip on the Big Island Out of when I arrived in Hilo Thurs June 16 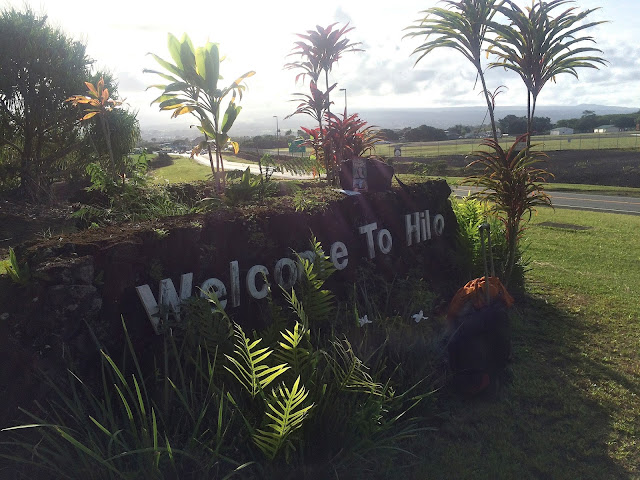 To get grounded to this new place, I decided to walk from Hilo Airport to the Enterprise rental, as I found the rental cheaper in town that at the airport on this journey ----seeing the foliage and hills actually groking I am really in the tropics on the Big Island!   - Notice my pack with wheels, and the CPAP case, and I have on my back my computer backpack - Staying fit too, is always my want - in cost effective eco travel --- 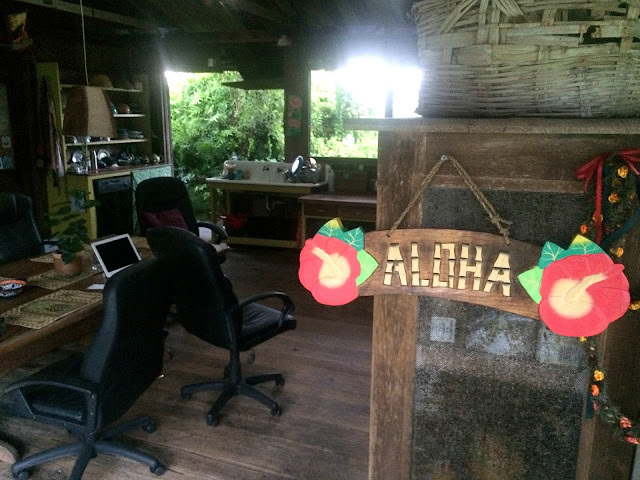 Here is the simple and rustic open air kitchen where I spent time writing and chatting with Joyce, my host and guide in the greater Puna area  ----- 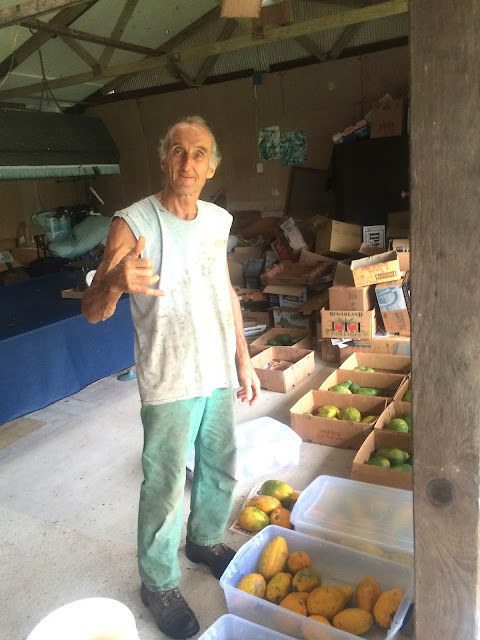 Living nearby is Clive, the farmer who is responsible for growing the papayas, bananas and other fresh roots and fruits - have ginger and turmeric as well - Giving me the morning shaka sign of peace -Clive was my first contact here on the Big Island that I found through my volunteer work with Mankind Project International- and grateful to be welcomed to the Aina - spirit of the land with 11 men with a jump in fresh water after an inipi - Pidamiyayedo! 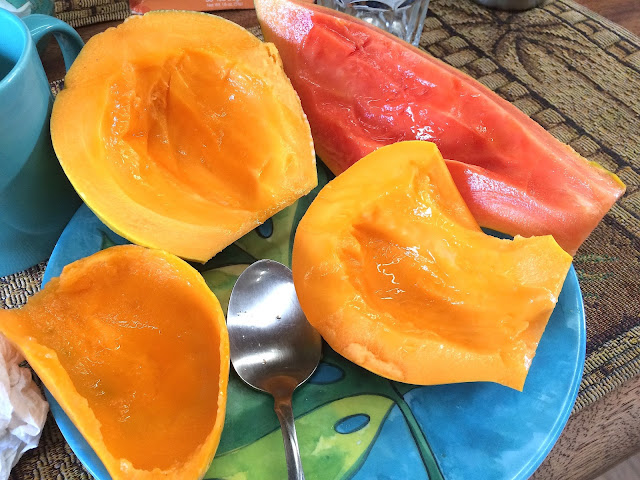 Fresh fruit, local papaya's for breakfast with Joyce in the AM, whilst I brew some coffee ----- a local Kona as I recall, the taste from the island  - mmmmm 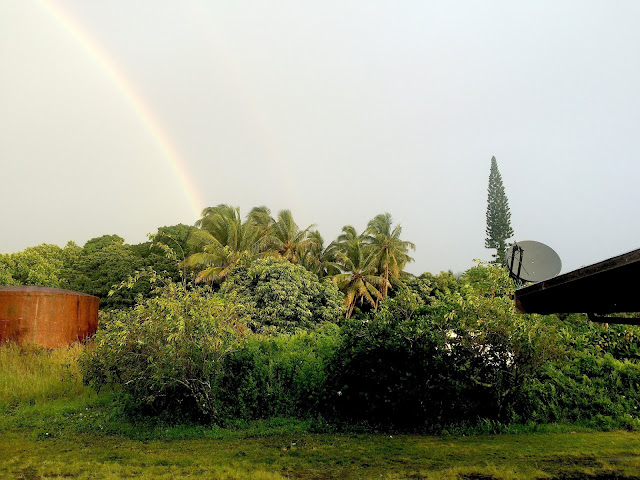 Rainbow view of a soft rain morning from the open kitchen looking to the north  ---- Great to have a home on the island to come back to each night, a very homey B and B, and my beginning to find lodgings all much less than the $99 space my MKP friend Kevin E recommended on the south east coast of O'ahu on the other side of the mountains from the sprawl of Honolulu ---my refuge for 4 days on O'ahu (there is no "w"in the breathing language of Hawai'ian) a'loha 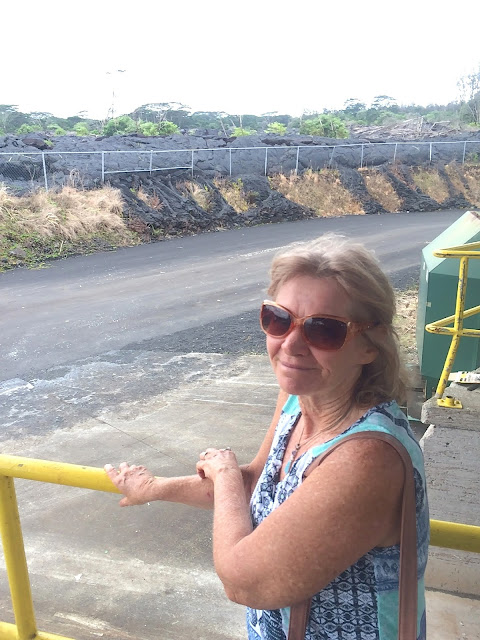 Joyce showing where the lava came right up to the recycling station in Pahoa during the last close lava flow - Great memories of waking up to her chanting in Hawaiian to Pele, in respect to honor the fire from Mother Earth in a good way 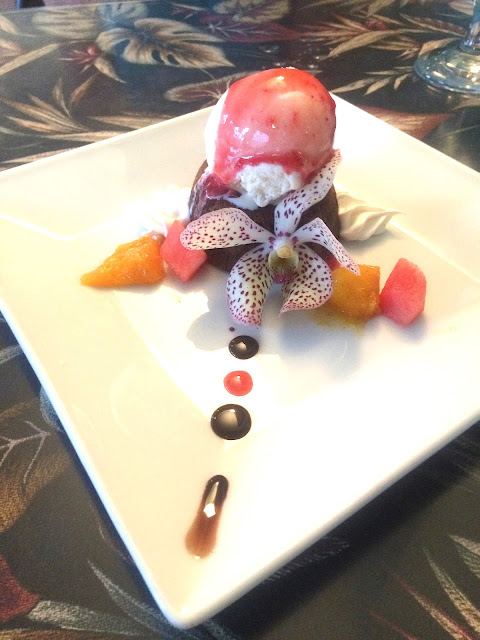 Only in Pahoa, a chocolate volcano dessert complete with flowers at a local cafe' shared with with Joyce in this small town in Puna on the Big Island 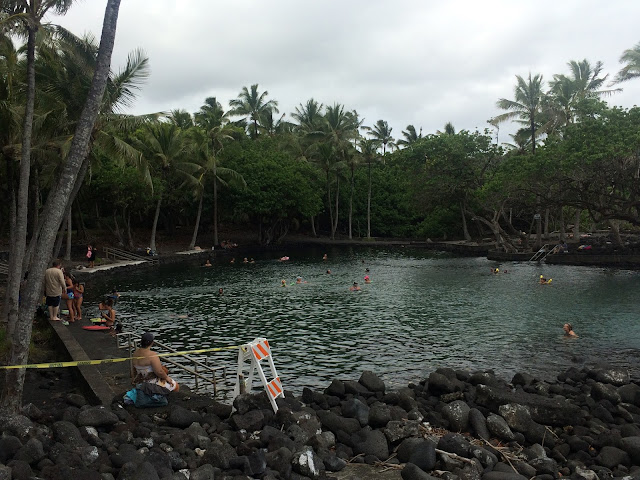 Joyce and I would drive down to the coast and take a dip in the warm waters here at , and then chat with the local artists several mornings   -----