Easy Does It Bike Ride! 16 Miles - Minnehaha Creek Trail to Lakes back on the Greenway Trail 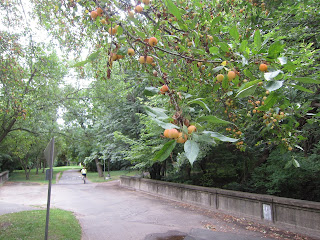 My friend Bob Pahl invited me to join him on a Sunday bike ride with some of friends.  We met a the Bridgeman's area parking lot by Minnehaha Falls.  We traveled west along the Minnehaha Creek bike path.  Being an independent sort I missed the path as I went out ahead into the neighborhood of south Minneapolis and venture back on the trail by Portland Avenue.  West of Portand, near Lyndale, I noticed these yellow crab apples and stopped to rest and contemplate the trail.

For perspective on the Map,  here is a map downloaded from
http://www.minneapolismn.gov/bicycles/bicycles_bikemap2_index 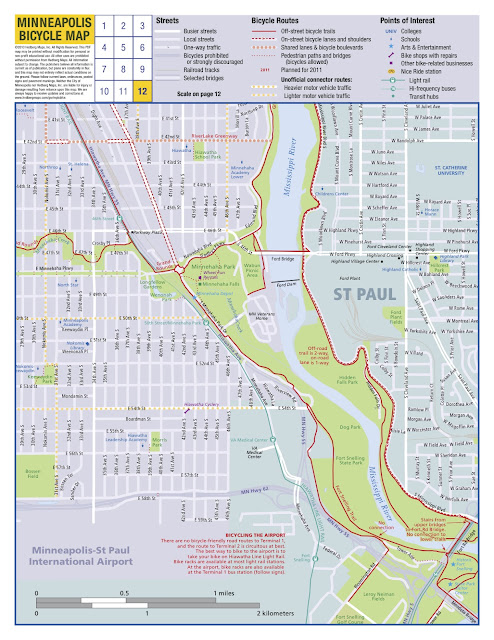 We began where Minnehaha Trail-Parkway, crosses Hiawatha where the bike trials converge at the northwest corner of Minnehaha Park. 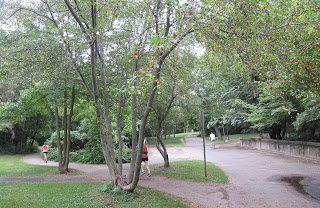 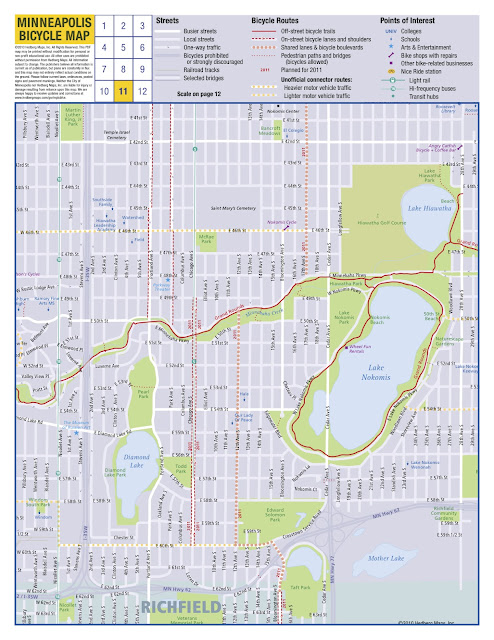 Map #11 Showing the Minnehaha Creek Trail and the trail around Lake Nokomis. 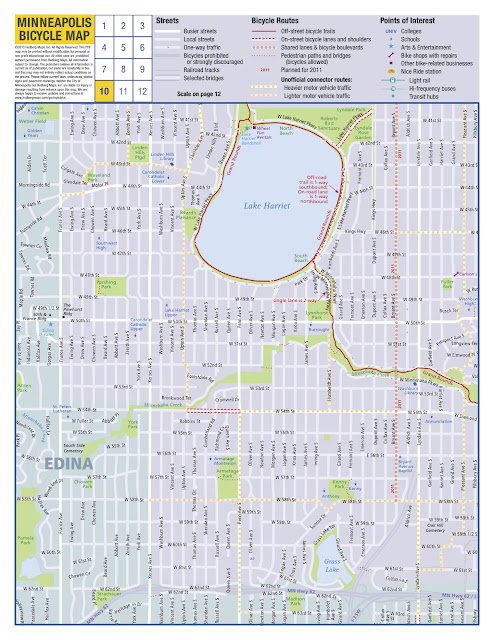 The Minnehaha Creek Trail swings north with the creek as it comes out of the SE corner of Lake Harriet.  Here the trail goes clockwise, to the west and then north past the Lake Harriet Bandshell and the Yellow Trolley to map #7 and Lake Calhoun..... 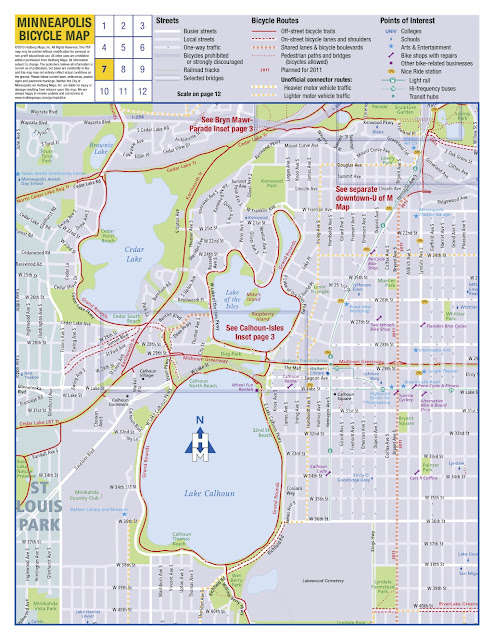 Map #7 where the trail we took goes clockwise on Lake Calhoun to the northeast side, where the trail goes under Lake Street toward Lake of the Isles where we got on the Greenway heading through Uptown on the Midtown Greenway. The Greenway, follows a abandoned railroad right of way, all the way to the Mississippi... 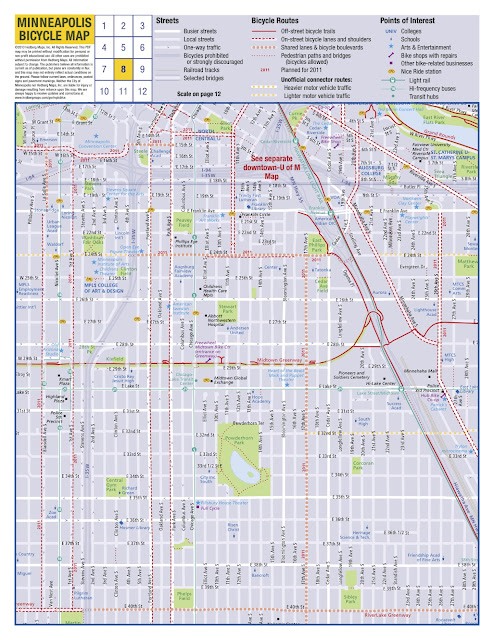 Here is where the Midtown Greenway goes right through the center of Minneapolis with a smooth trail..see where the east west trail curves north, this is where the Martin Olav Sabo bridge is I photographed yesterday. 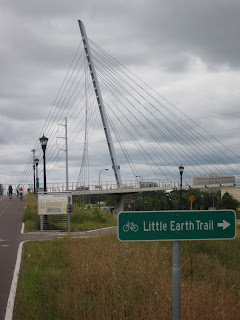 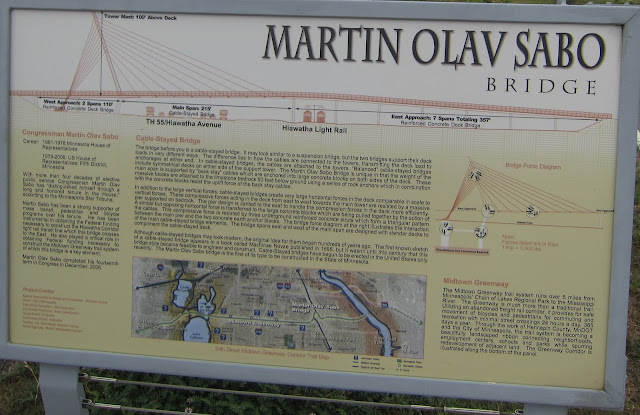 Here is a more detailed description of the Sabo bridge... 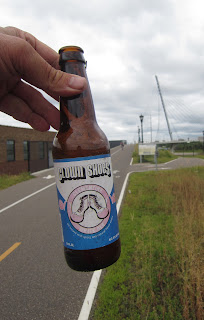 Funny, as I looked in the plants on the side of the trail, this pink and blue beer bottle with the name Clown Shoes, struck me as very unusual!   Reminds me of some shoes a new friend on line takes photos of! 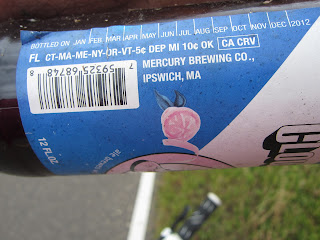 Then I noticed the beer comes from Ipwich MA, the landing place of the Joseph Bixby and his family from East Anglia (Suffolk) in 1638.
http://www.ipswichalebrewery.com/products 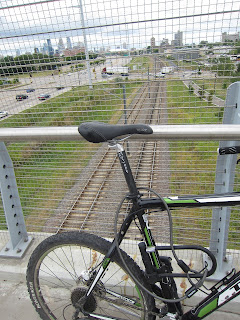 Here is my newer Trek Bike with downtown Minneapolis in the background taken from the Sabo Bridge.. 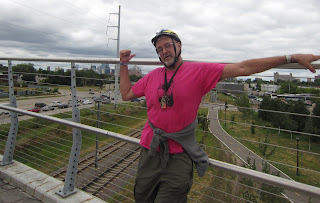 Here I am on the bridge wearing the pink T shirt designed by Eric Evenson who is a teacher of Akido, and was given to me after a ceremony.  Thanks Eric!! 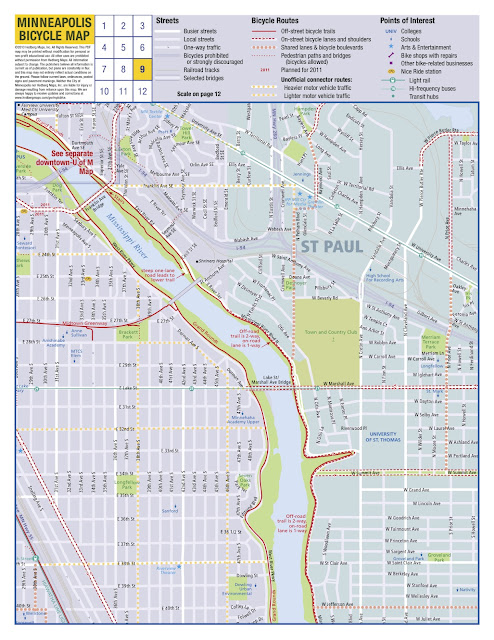 Finally the end of the Midtown Greenway where it joins with West River Parkway and trails.  Yesterday, we completed an about 16 mile trip going south on the West River Trail back to by Minnehaha Park where we began.   Fun to add these maps. Hope someone else out there enjoys them too.  Comments please......:-)


Posted by Thomas Glessner Weaver at 8:13 AM No comments: