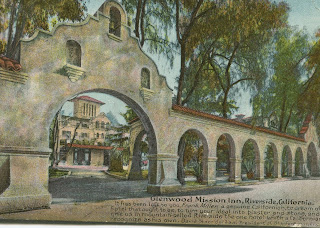 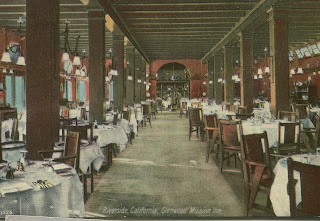 Postmarked March 10, 1920 "We are staying at the Mission Inn and are occupying the Presidential Suite. How is that for class? Tthis is a wonderful place to stay and just as wonderful a place in which to eat. Love to all, Mary." Addressed to H C Glessner, 1228 S Main Street, Findlay Ohio. The next year when Margaret Weaver, my mom was 11, in 1921 she describes on p13 of her autobiography "With my parents' friends, Irv and Stella Pearne and their son, John, we drove up into the mountains and the redwood trees to Big Bear for a picnic, eating beside a gurgling mountain stream, where John and I played making a dam in the icy water. Easter Weekend was spent in RIverside, in an elegant, old hotel, Mission Inn. On Easter morning we joined in a procession of cars ascending Mt Robidoux in the dark to participate in a sunrise service." 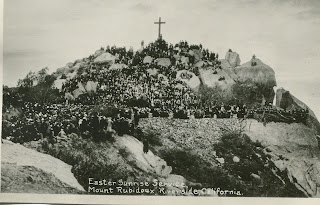 Posted by Thomas Glessner Weaver at 7:01 PM No comments: 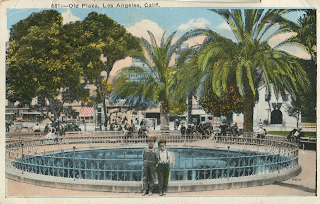 Postmarked April 23 1928 Arcade Sta.Los Angeles. "Don't forget to tell Inez that Dad, Mother and I took a taxi to-day and went down to Barker Bros and to lunch there, then Mother walked through some of the stores and walked down to Robinson's, but did not go in, then they took a taxi home. Mother enjoyed it all, the first time she has been in a store. Will do it again soon. Love, from Mary." Addressed to Harry C Glessner Findlay Ohio c/o The Glessner Company. Context: Mother is Emma Chappelear Glessner then some 73 yrs old who had cataracts and a few strokes. Dad is Len Glessner, founder of the Glessner CO. Mary is my great aunt, and only daughter of Emma and Len Glessner and Harry, my grandfather was the head of the GLessner Company during Len Glessners travels to be with his in laws in LA.
Posted by Thomas Glessner Weaver at 6:42 PM No comments: 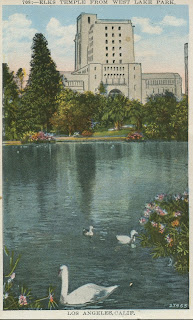 Postmarked March 24 1929 Arcade Station, Los Angeles Calif. "Everything fine! Mother doing well and Mary recovering nicely. Will sit up in a day or two. Love to all. Dad." Addressed to Harry C Glessner Findlay Ohio, Context. Mother refers to Emma Chappelear Glessner, Len Glessner's wife, my greatgrandmother, who was born Aug 15, 1855 Camden Pt MO, lived in Clinton-Farmer City IL and married Len Glessner in Farmer City Sept 12, 1877, who died back in Findlay OH on July 1 1929. According to Peg Weaver she had several strokes later in life. Mary is my great Aunt Mary Eleanor Glessner. Harry would have been home at Glendale Ave S Findlay with his wife Inez, as their only child, Margaret was now in college at Oberlin.
Posted by Thomas Glessner Weaver at 6:21 PM No comments: 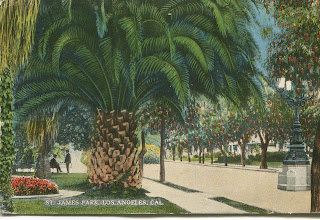 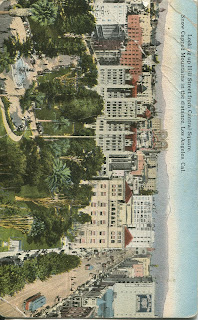 Here is the view from Central Square LA up Hill Street where the Glessner Family would visit in the 1920's. For a historical overview check out: www.csulb.edu/~odinthor/socal8a.html.
Posted by Thomas Glessner Weaver at 6:34 AM No comments: 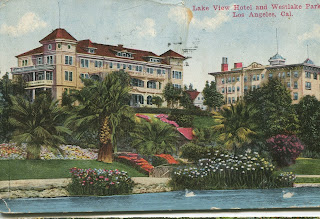 The tradition of the Glessner Family according to Peg, in the teens and 20's was to rent a place near WestLake in LA, now known as MacArthur Park. While visiting the Chappelear relatives, they would center out of this area. On the back of this card postmarked in Nov 1917 "Mr H C Glessner 1228 S Main St. Findlay Ohio. L.A. Cal. Dear Harry, Received your mothers nice letter. So glad you are better. I ordered the incense. They say it is much better than in the paper. Try it and see. Alice is quite comfortable now, sits in a wheel chair. I saw her last Thursday. Was just up the hill ____in this __ stair. Aunt Tillie (Holmes)

From Wiki Pedia "MacArthur Park (formerly Westlake Park) is a park in the Westlake neighborhood of Los Angeles, California, named after General Douglas MacArthur and designated city of Los Angeles Historic Cultural Monument #100.[1]
Posted by Thomas Glessner Weaver at 6:04 AM No comments: 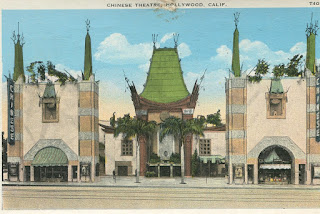 I enjoy reading Peg's post card collection she shared with me the last 10 years of her life. On the back of this card, sent by my grandfather, Harry Chappelear Glessner with a March 14, 1929 postmark from Los Angeles "Aunt Mary Francis and I are going to see the Broadway Melody at the Chinese tonight" and it was addressed to "Miss Margaret Glessner, Grey Gables Oberlin College, Oberlin Ohio. " A one cent green Franklin Stamp sufficed. I will be flying to LA on Feb 20th and hopefully visiting this place and connecting with Asian - American Culture while visiting friends and family. Steve Basil and Rhonda Beale and family live in Woodland Hills and Dave and Kris Weaver-Bowman and sons live in Fullerton and other MKP brothers live in between. I look forward to what can be created. Mike and Lucy Steiner fellow Carleton '69 grads also live in Fullerton. I will enjoy visiting the sites Harry, Harry's dad Leonard Cowles Glessner visited when they visited the Chappelear aunts, sisters of Emma Chappelear who moved to Southern California from Illinois, thus creating a regular visiting place during the era of train travel. Look for more postcards. Current link to "t was once stated that “to visit Los Angeles and not see the Chinese is like visiting China and not seeing the Great Wall.” Grauman’s opulent, awe-inspiring presence and history has been a cornerstone of Hollywood for over 75 years. See current link:

"The grand opening of Grauman's Chinese Theatre in Hollywood on May 18, 1927, was the most spectacular theatre opening in motion picture history. Thousands of people lined Hollywood Boulevard and a riot broke out as fans tried to catch a glimpse of the movie stars and other celebrities as they arrived for the opening. The film being premiered that night was Cecil B. DeMille's “The King of Kings,” which was preceded by "Glories of the Scriptures," a live prologue devised by master showman Sid Grauman. A Wurlitzer organ and 65-piece orchestra provided music for the prologue. The theatre opened to the public the following day, May 19, 1927."
Posted by Thomas Glessner Weaver at 5:40 AM No comments: 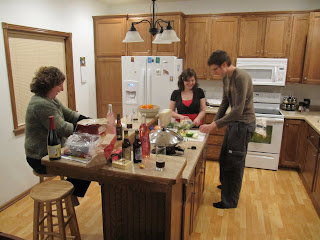 Here are Jane Newell, Amy Brown and Jesse Weaver preparing food Friday Jan 8 after a stop in Minnetonka at the new Trader Joe's when Amy flew back from her winter break in the Memphis area. After 5 months of stewardship of this new home, Jesse has made many decisions of how to create a cost effective living situation so close to downtown, and eBureau, this place of his current employment as a network administrator. 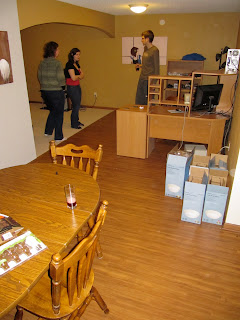 Here is the basement with the new vinyl floor and dry wall finishing with overhead lighting that Jesse coordinated after getting the Obama stimulus rebate. Wow, we initiated the space and table with a rousing game of Cribbage! Thanks Jesse and Amy for creating such a welcoming space.
Posted by Thomas Glessner Weaver at 5:12 AM No comments: