From Margaret G Weaver's Memoir Rememberings 1994 p45, describing the early 1940's in Faribault "The Agerters and the Weavers, enjoying the out-of-doors, decided to buy a small parcel of wooded land near Faribault. The County Surveyor, Walt Dokken, understanding our wants, helped us find what came to be known as "The Prop," sixteen acres of slightly hilly woods along the Straight River, with a small stream and a few birch trees, which were rare in this area of Minnesota.

1942 Spring photo by Paul H Weaver, p 50 photo album --Dam with State Hospital Property on the left and the bluff area of some 16 acres, Walcott Twp, that the Agerters and Weavers bought together..... 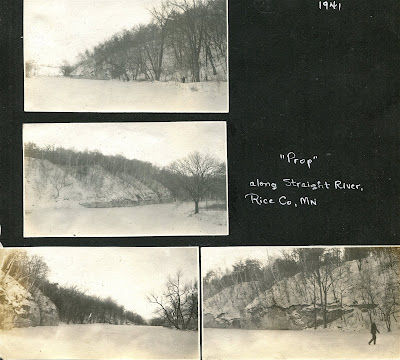 Ken Agerter with sandstone bluff on the west side of the Straight River, 49 of photo album with 4 other views on the frozen Straight River in winter 1941.  (As you can read below, the Weaver's gave this land through the Nature Conservancy to River Bend Nature Center to honor the life of Dr Paul Henry Weaver (1910-1981)  who loved the out of doors and enjoyed this land he called the "prop".)

"In the process of looking for a suitable place, we spent time at what we called the Langslag Property, which had many attractive red-berried shrubs, hearts- bursting-with-love, Euonymus atropurpureus. I was sorry that we found none of this at the Prop."
"Wanting a shack at the Prop, we bought Mrs. Saufferer's chicken coop, sawed it into four sections and secured a permit from the Highway Department to have a truck haul it to our place. (See picture #3, p. 136.) In the meantime we had fun making a simple road in the form of a loop, cutting down trees by band with a cross-cut saw and securing the right-of-way beside a small railroad track. A cement foundation was made to support our shack (my one and only experience at puddling). After scouring the coop and putting it back together, we painted it brown with yellow window trim. It was nifty!" 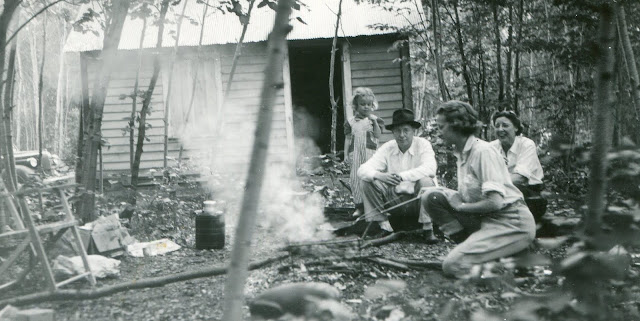 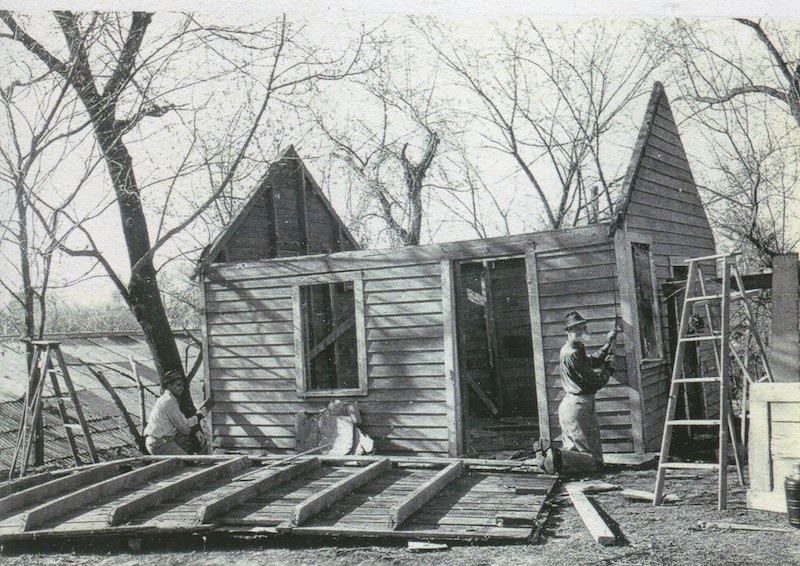 Photo described from 1942, p 136 of Peg Weaver's "Rememberings" Ken Agerter and "Pete" Weaver, with smoke from his pipe. 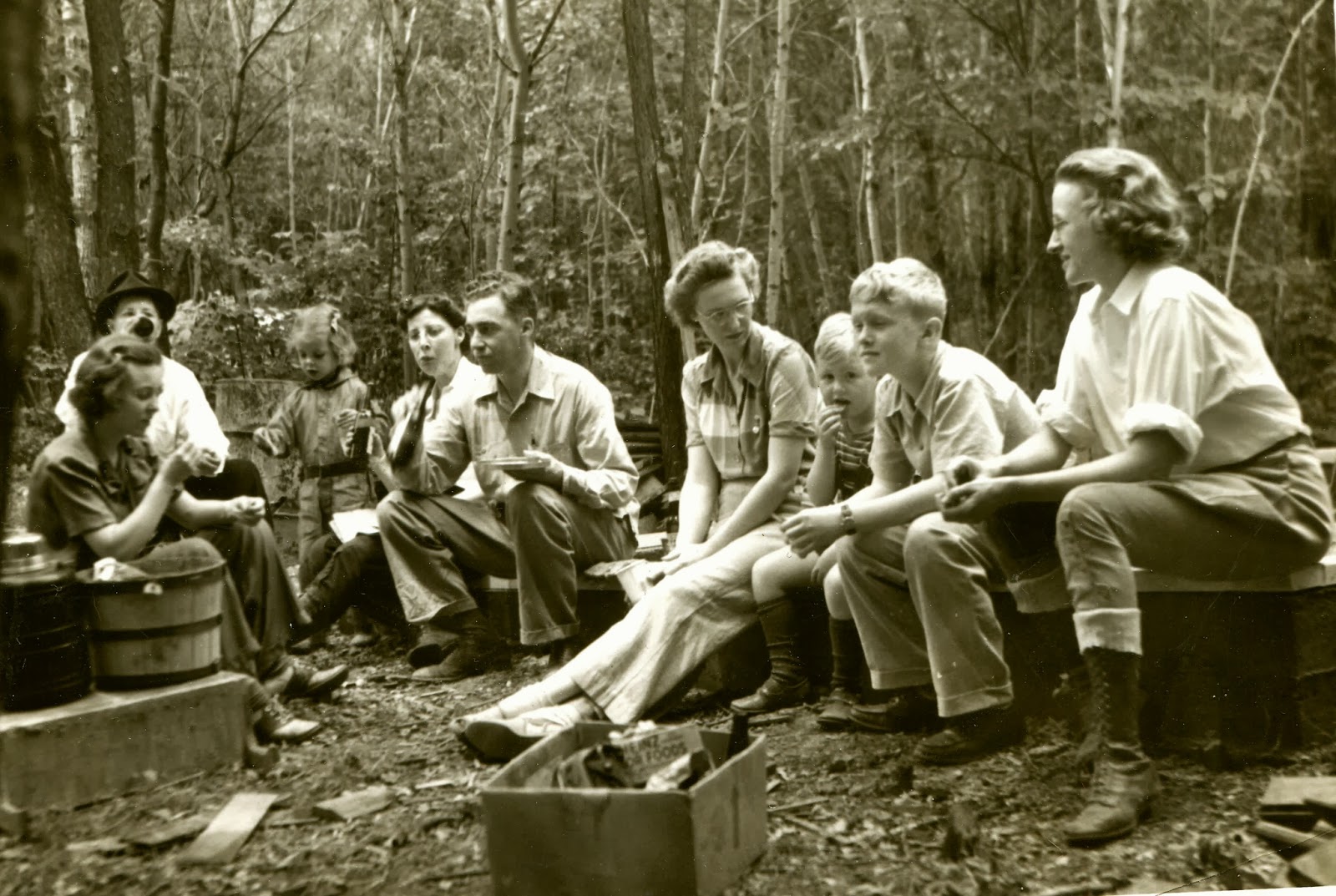 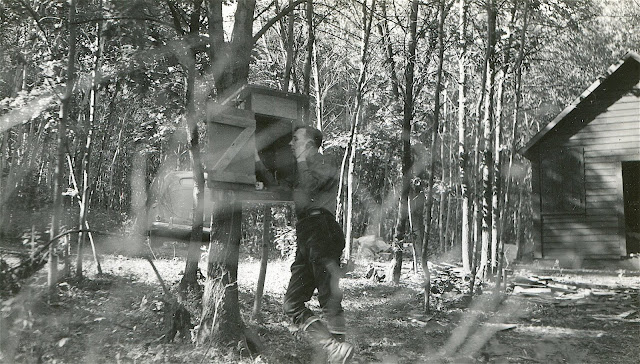 Dr Paul H Weaver on the phone on the tree box summer of 1942.  I way to be in touch with patients while being "on call" as a general practitioner
"Ray Lieb, a pharmacist who owned a quarry near Faribault, gave us limestone for a fireplace. Pete and Ken built a handsome, huge fireplace which worked beautifully. Such fun we had in our dirt-floored shack. Beer left in the shack was frozen beer in the winter. Pete had a telephone installed on a telephone pole, so that he could be reached in case of an emergency. Although this was long before my mushroom days, I remember seeing many interesting fungi during one wet summer, some that I have never seen again. The Prop was a fun place to have picnics with: Jim and Carol O'Neil; Mary Henning and her boys, Stan and Butch, (Don Henning, Headmaster of Shattuck, was serving as Chaplain in the Military Service);By, Marde, Ruth and Tom Berhow; Peggy's parents, the Harlans, and Peggy's sister and her husband, the Kicksmillers."..."We had spent the afternoon at the Prop when we heard about the bombing of Pearl Harbor on our car radio as we were returning home. That night we went to Roger and Isabelle Kiekenapp's for a scheduled bridge club meeting, but were too shocked to play bridge." 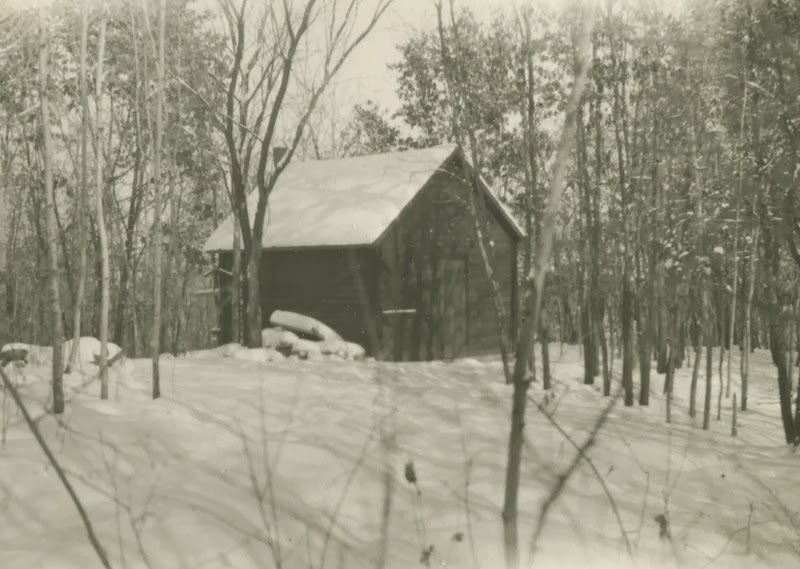 Here is the only photo I found of the completed Shed that I think hung in my fathers office.   I don't remember being in it and I think it was burned down by trespassers in the early 1950's and all that remained has the fireplace and foundation. 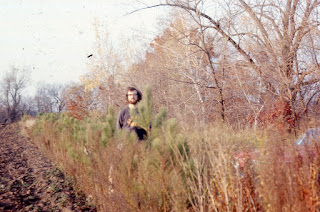 Taken in 1972, here is the author at the side of the prop woods, where the field was still being plowed for crops.  Later this farmland to the left, was sold for the Chadderdon Edition.  Dewey Van Orsow and his boyscout troop from IC School I believe would camp on the property and one spring in the 1960's the troop planted evergreens on the part of the prop that was next to the fields.  I drove the 1961 red Plymouth there (in the tall plants around the trees) to see how thing were growing. 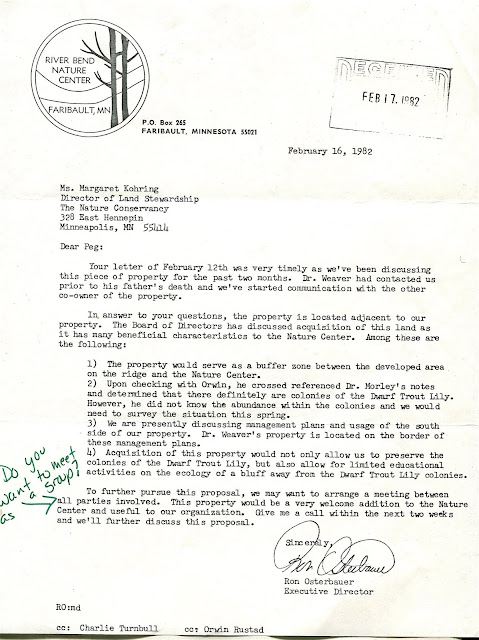 Some of the correspondence prior to the Ceremony in 1983.  Ron Osterbauer, Ex Dir writing Peg Koering of The Nature Conservancy cc to Charlie Turnbull and Orwin Rustad, in Feb 1982 mentioning the dwarf trout lily found on the property in the past.
So the four of us Weavers returned to the land and met a variety of local folks who are active in supporting protection for this land for future generations.  Thanks to all who showed up!
After my dad's death in January 1982 in Brainerd, the family decided to give the land along the river to the Nature Conservancy who then passed it on to River Bend Nature Center. Here are some of the folks who showed up in 1983 for the dedication ceremony. 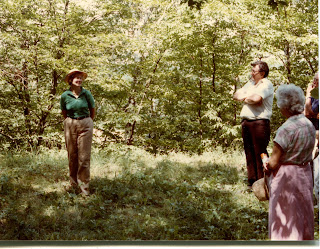 Peg Koering of the Nature Conservancy Led the Dedication here on the prop. 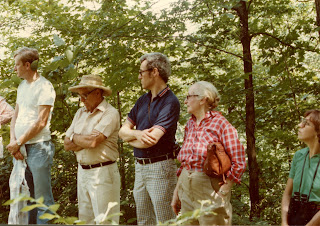 Jack Weaver, Larry Knutson, Jim Weaver, Peg Weaver and ? on the property during the dedication ceremony with Peg Koering of the Nature Conservancy and Orwin Rustad. 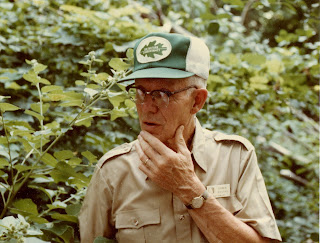 Orwin Rustad, local visionary for the River Bend Nature Center and naturalist at Shattuck School at the dedication. 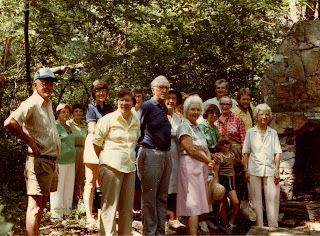 At the foundation and fireplace built by my dad, Paul H Weaver and his friend Ken Agerter from Shattuck School in the early 1940's, the group including Kay Jankey fourth from the left, Tom Merner and his wife, Bernice Knutson, Jack and Peg Weaver join in the dedication. 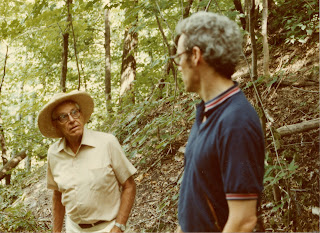 Peg Weaver's description in Rememberings p 112 "In July 1983 Jim, Tom and I drove from Pelican, Jack, from Wisconsin, for the dedication of the Paul Weaver Wood Bluff Preserve, what Pete, Peggy and Ken Agerter and I had fondly called "The Prop". Since Pete had often mentioned that he would like to give the Prop to some nature group, I was pleased
that The Nature Conservancy agreed to accept the gift. I had hoped that Peggy would give the Agerter share, but she preferred to sell it to the Nature Conservancy.
Because the Prop contained large areas of the Minnesota Dwarf Trout Lily, Erythronium propulans, Minnesota's only endemic plant and an endangered species, The Nature Conservancy was interested in its protection. This beautiful, little spring flower occurs only in Rice and Goodhue Counties in Minnesota, with the largest number of colonies recorded at the River Bend Nature Center, adjacent to the Prop. Mary B. Hodges, a teacher of botany at St. Mary's Hall in Faribault, first collected this rare wildflower in one of the campus ravines in 1871. The plant was sent for identification to Dr. Asa Gray, botanist at Harvard University, who gave it its scientific name.
Most of the thirty or so people attending on a hot, sticky day were from Faribault: Tom and Betty Kaul, Bernice and Larry Knutson, Rita and Burt On, Ardis Siemers, Orwin Rustad, Tom and Bess Merner, Kay and Ken Relyea, Peggy Agerter, plus others I didn't know. Peg Koering, from Minneapolis, represented The Nature Conservancy. Seeing Don and Lib Lawrence from Minneapolis, very active Nature Conservancy members, was a pleasant surprise. Especially, I enjoyed a long visit with Bernice and Larry Knutson who used to be our Faribault neighbors." 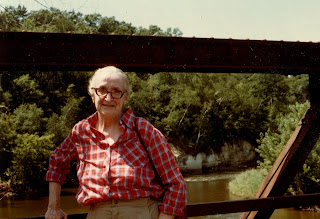 Peg Weaver with the sandstone bluffs and the Straight River behind taken from the bridge over the river. Note some of the birch trees that attracted Peg and Pete with the Agerters to purchase the property in the early 1940's. 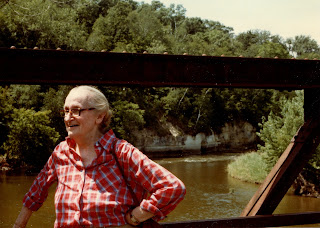 Another view with Peg Weaver with the bluffs and river in the background 1983.


Posted by Thomas Glessner Weaver at 9:13 PM No comments:

Glessners Inez and Harry 1942 in Faribault to 1972 in Findlay 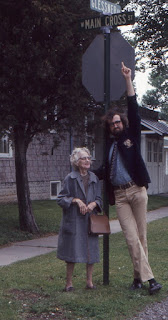 I visited Findlay Ohio in 1972 with my mom, Peg Glessner Weaver who was born in Findlay 3 June  1910.  My maternal grandmother here is Inez Chase Glessner, under the street sign of Glessner Avenue and Main Cross in Findlay. Inez married Harry Chappelear Glessner in March 25, 1908 in Findlay.  Here is the author with my Carleton College blazer on that I wore when singing with the Carleton Knights, 1965 -69. 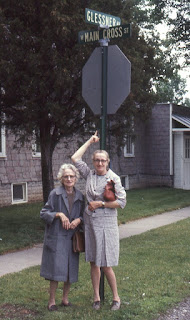 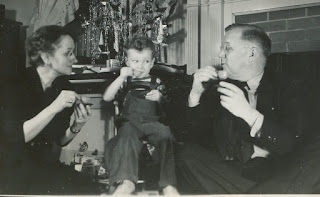 1942 Christmas Visit - Grandparents Inez and Harry Glessner with James Cowles "Jim" Weaver, having "tea".  Jim was born in Faribault MN Sept 8, 1940 and this was taken in the rental home, small limestone 201 4th Ave SW, mentioned in Peg Weaver's 1994 Rememberings Memior.  This is the third and last rental property prior to the Weaver's purchasing the larger limestone home at 425 SW 3rd St, Faribault in 1943, prior to John Eicher Weaver AKA "Jack's birthday in October of that year.

Posted by Thomas Glessner Weaver at 7:55 AM No comments: