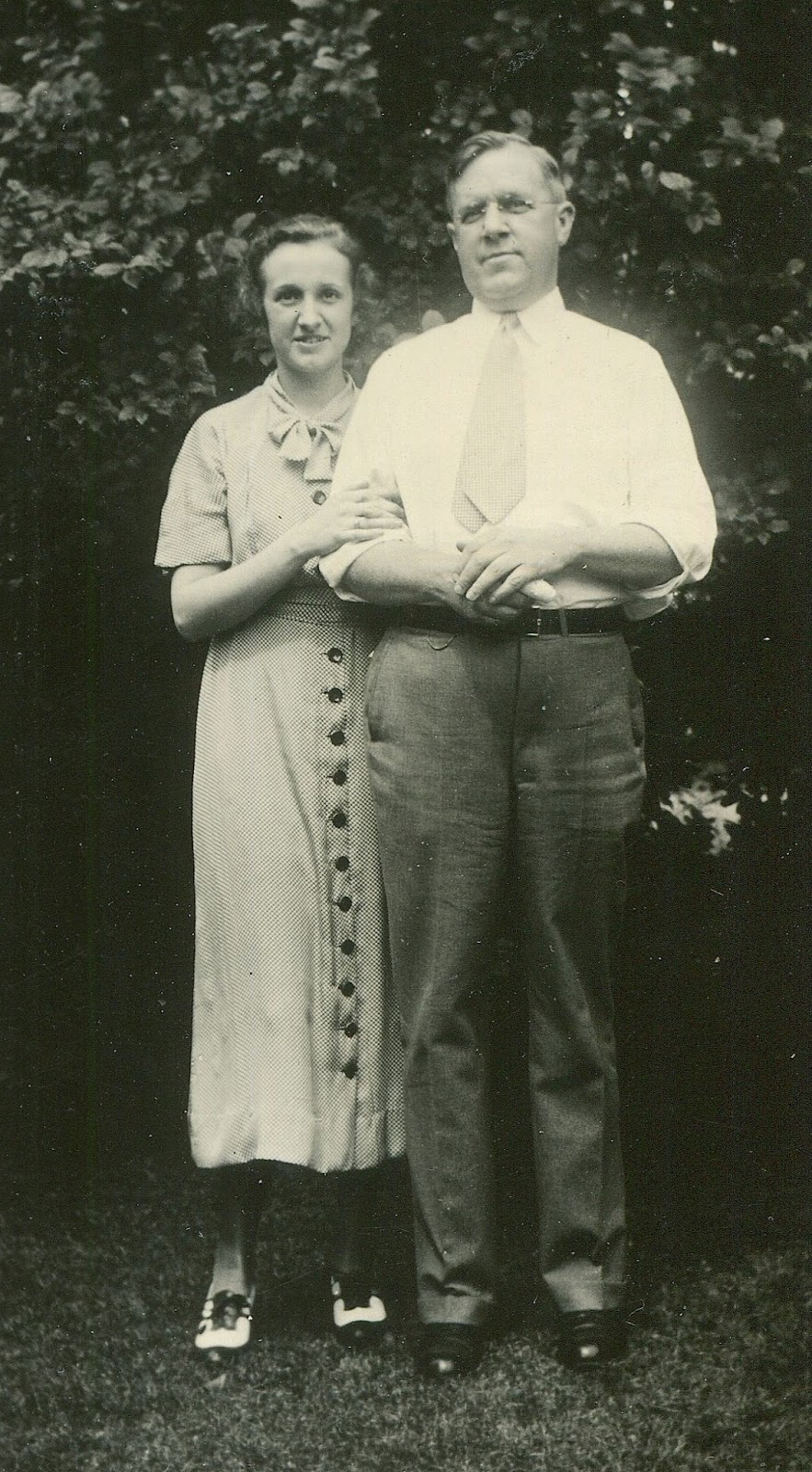 Born Margaret Mary Glessner, my mom preferred Peg.  Here she is during her college years with her father, Harry Chappelear Glessner, (Born Fredrick Glessner).
From p 25 of Peg's Rememberings "I am very thankful that my parents wanted me to go to college. Possibly they may have regretted that decision because my mother said, in a sad tone, that before I went to college I had always agreed with her! However, for some one in my parents circumstances, sending me to college was the accepted thing to do. How did I happen to go to Oberlin? When the Oberlin College Men's Glee Club gave a concert in Findlay during my junior year in high school, I attended a reception for the members afterward, where I was favorably impressed with the group and with the director, Jack Wirkler. The following year, Harold Kuntz, an Oberlinite from Findlay, invited me for an Oberlin weekend, no doubt upon the urging of the Admissions Office. After being escorted around the college, staying in a dorm and receiving other super treatment, I was sold on Oberlin.
I was thrilled when I received word that I had been accepted at Oberlin and at Grey Gables, a privately owned college dormitory operated by Mother and Daddy Dudley. I don't remember if I had applied to other colleges. In the fall of 1928 I packed my wardrobe trunk, which was sent by train, and was off to college." 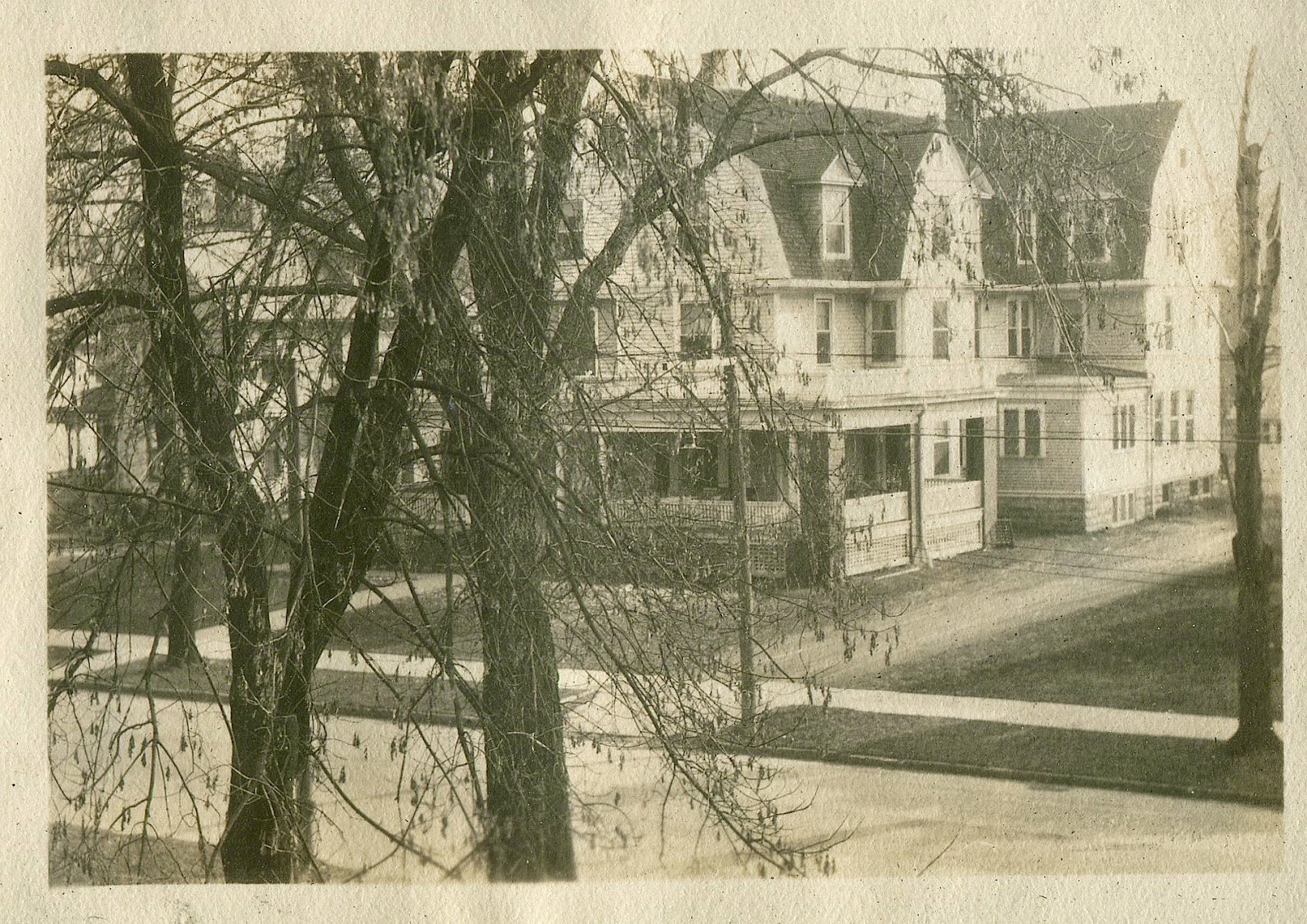 Here is a photo from Pegs album of Grey Gables around 1929. 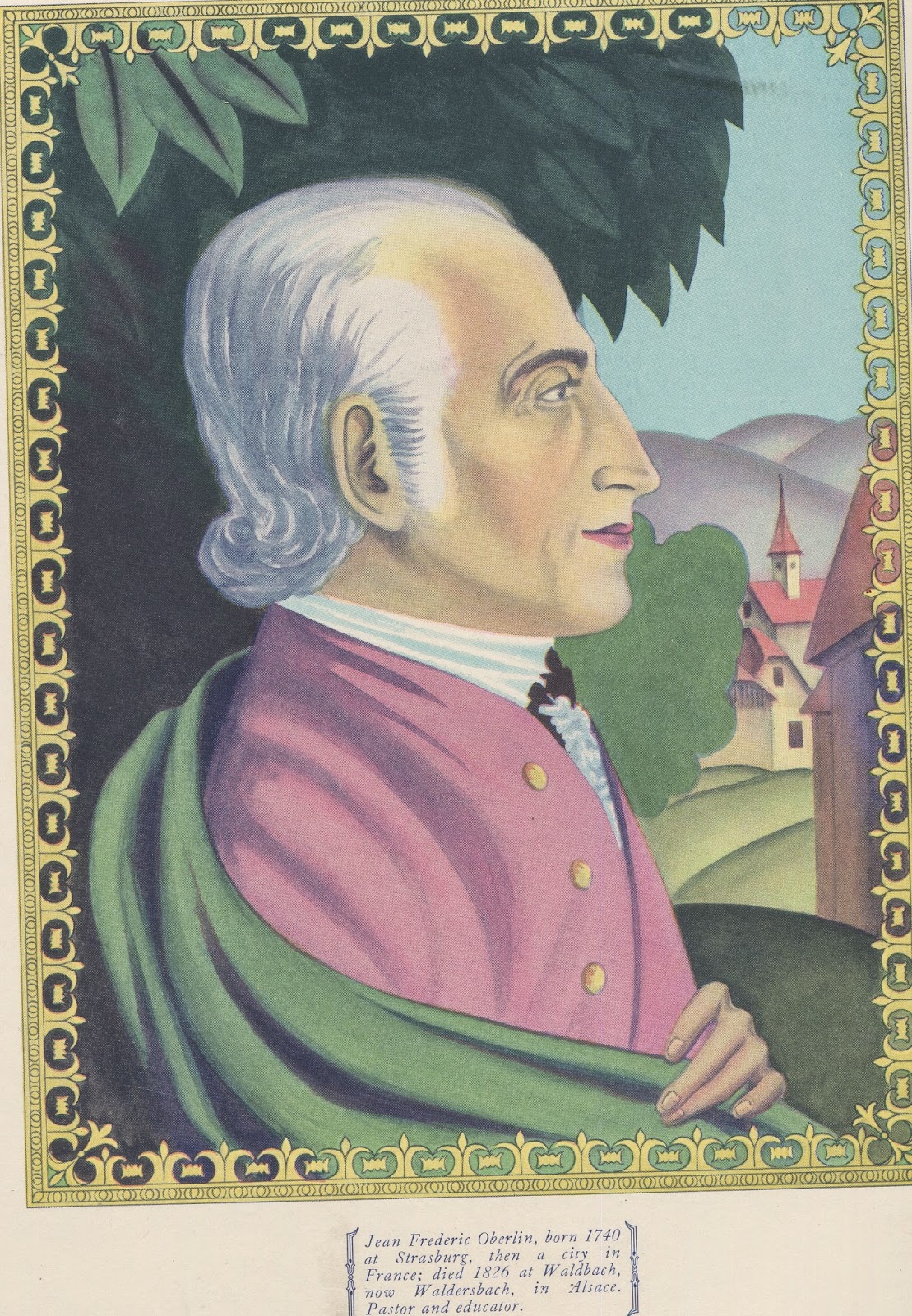 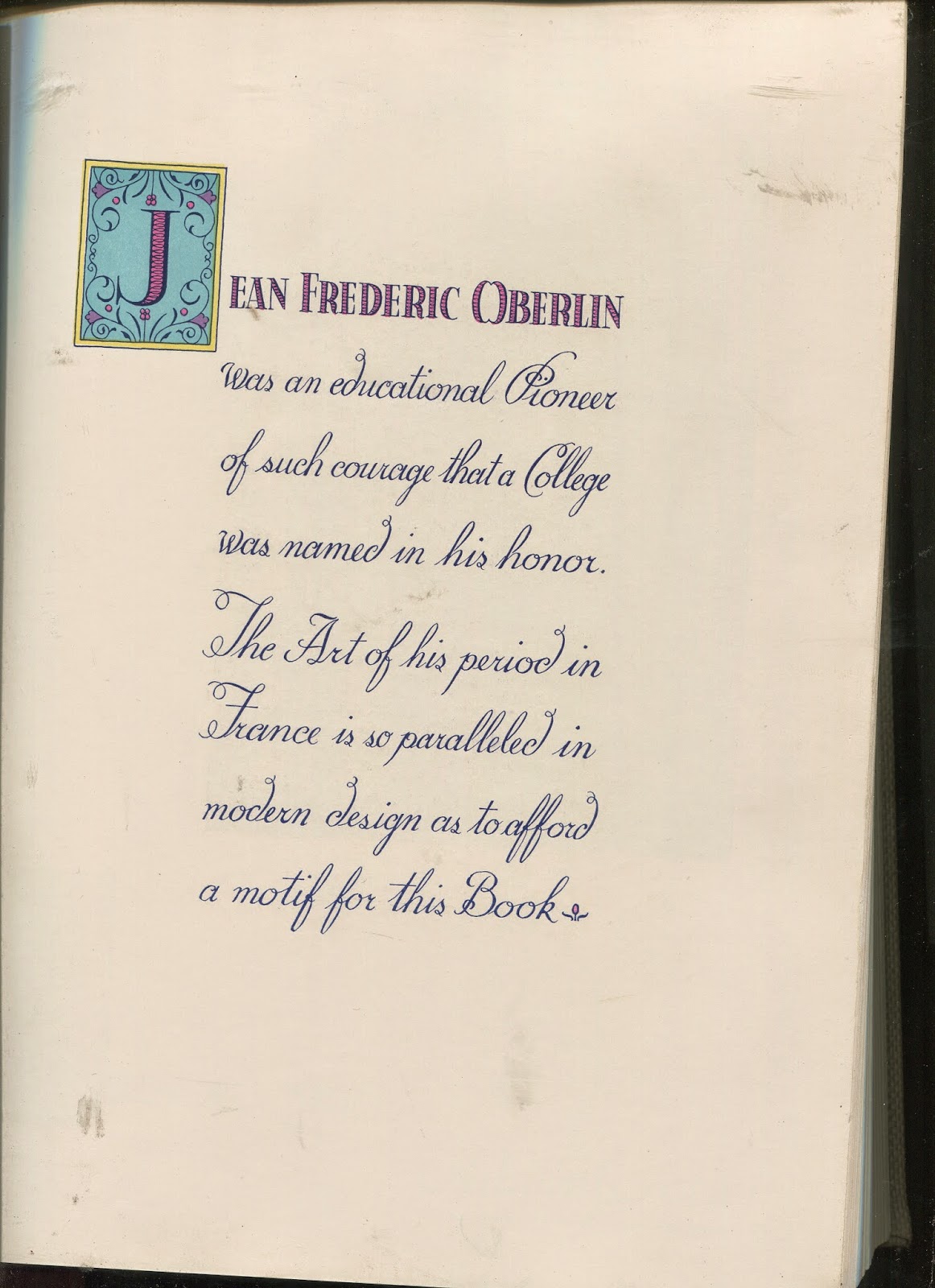 I recently discovered I had 3 of Peg's very large Hi-O-Hi Oberlin year books, and decided to take a look and even call the archivist to see if the college would like them.  Quite a quality printing here, with a color print of Jean Fredric Oberlin born Strasburg then in France, who was a pioneer in education.....Quite the cursive honoring the art of France.....and of interest for me, what was to be Peg's major.  From Hi O Hi, 1932. 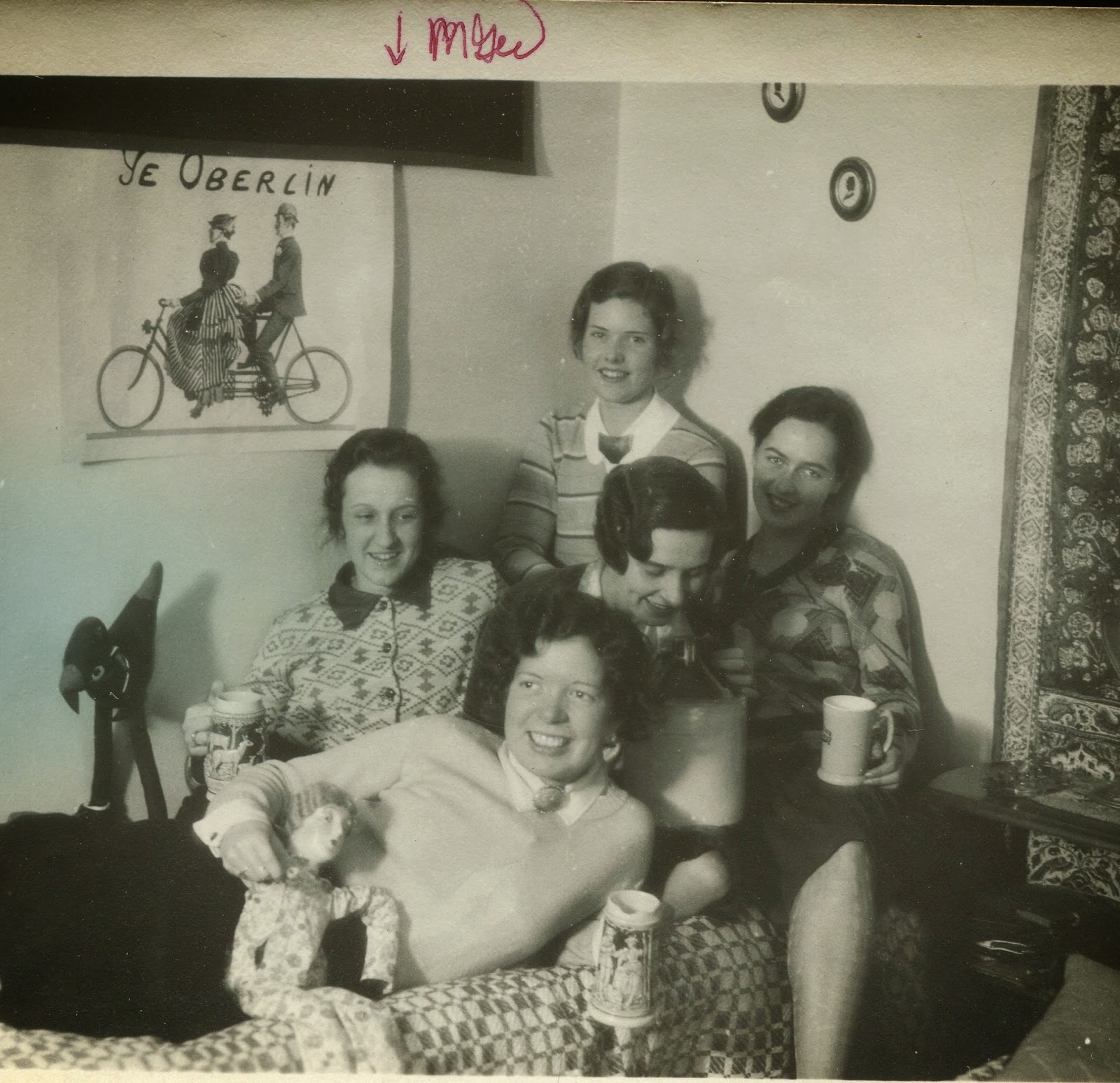 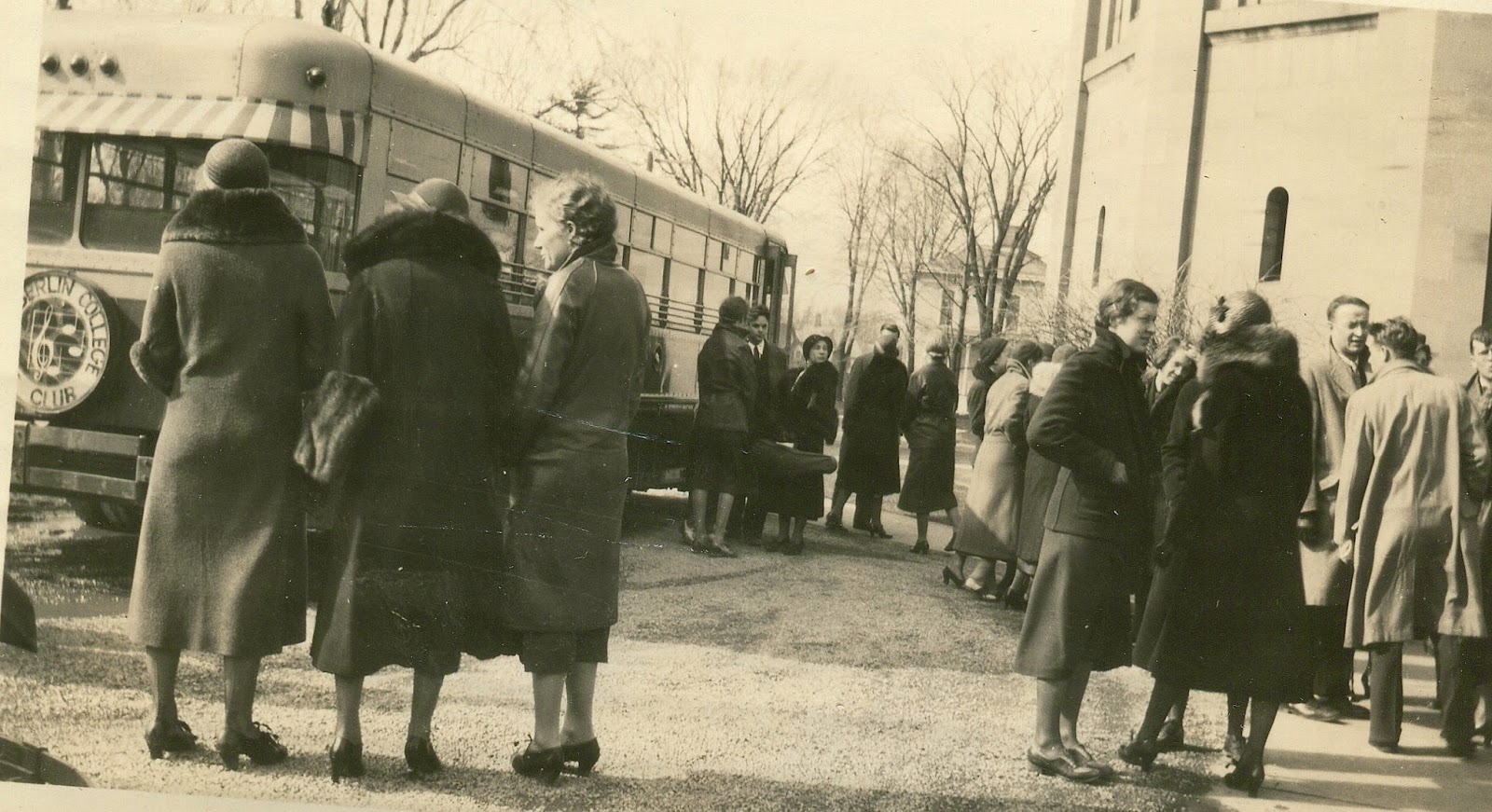 From Peg Glessner's album "Just before take-off"- Note circular sign at the back of the bus. Likely on campus at Oberlin. 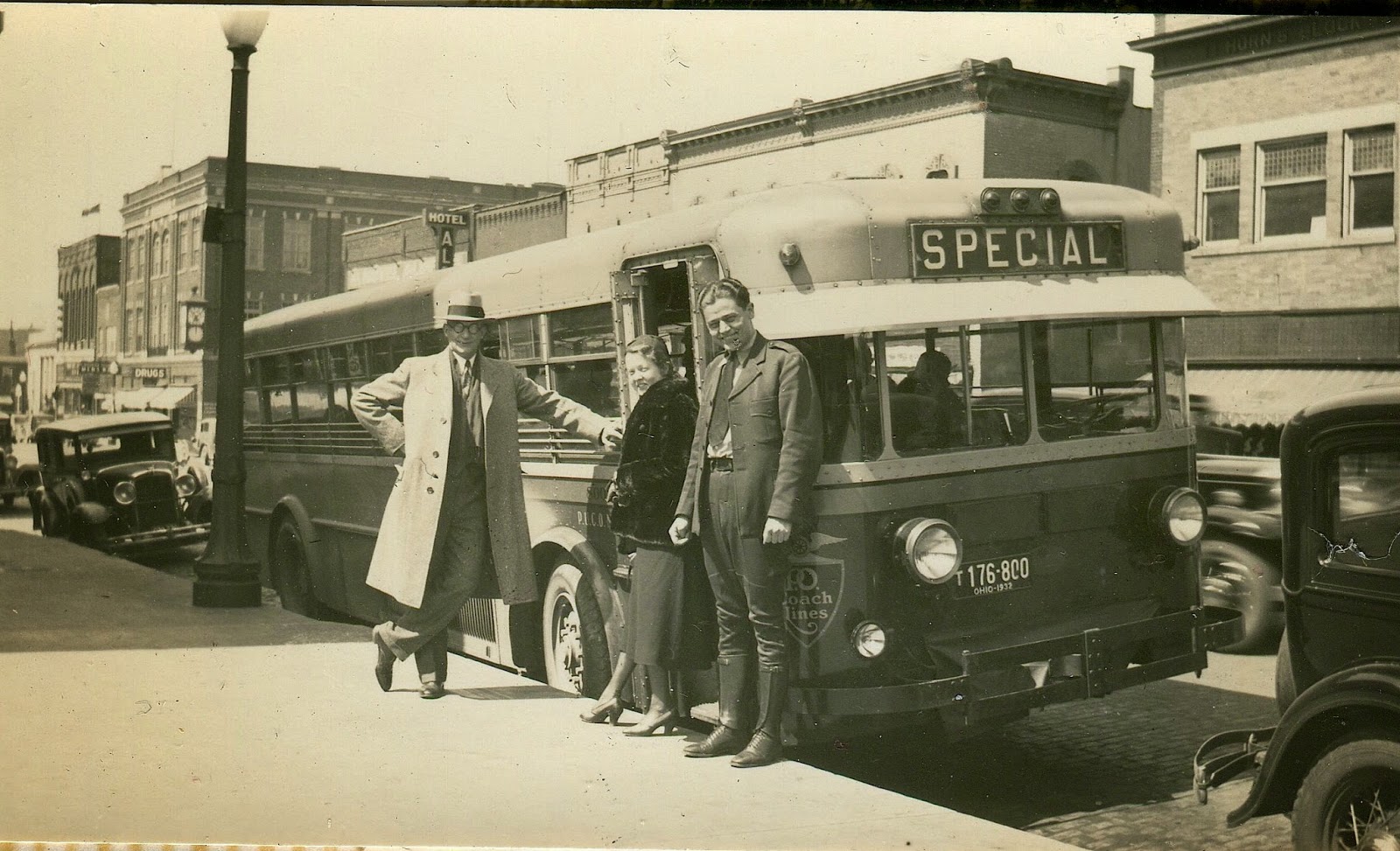 This photo is featured in Peg's memoir she self published in 1993 at age 83. From above she labels it is Jack Wirkler (director), Sarah Bradley (sic) Bradfield is a classmate, and Newt (bus driver)  (See picture #5, page 133.) 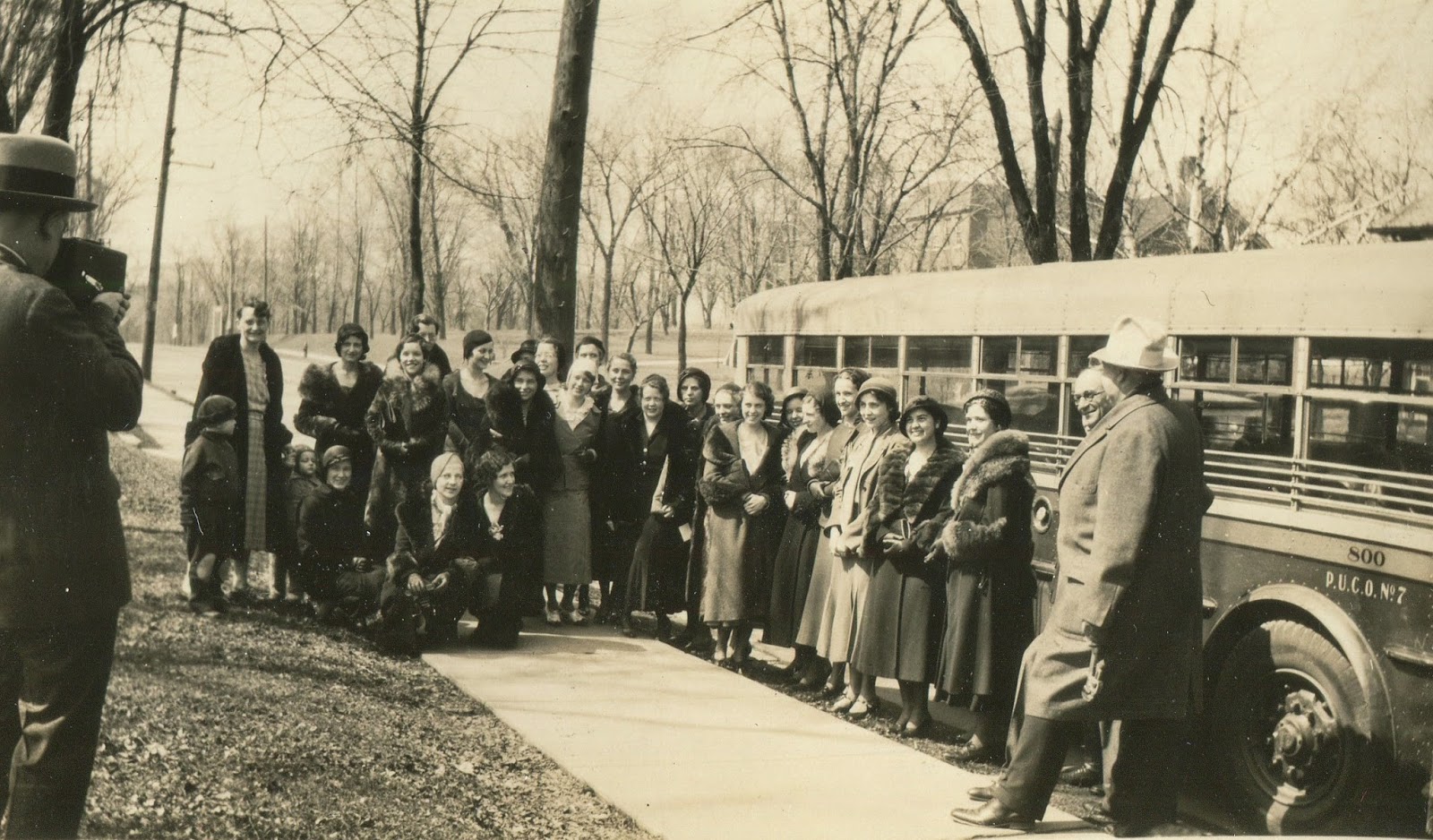 Peg labeled this in her album "Milwaukee - movies taken and everything" 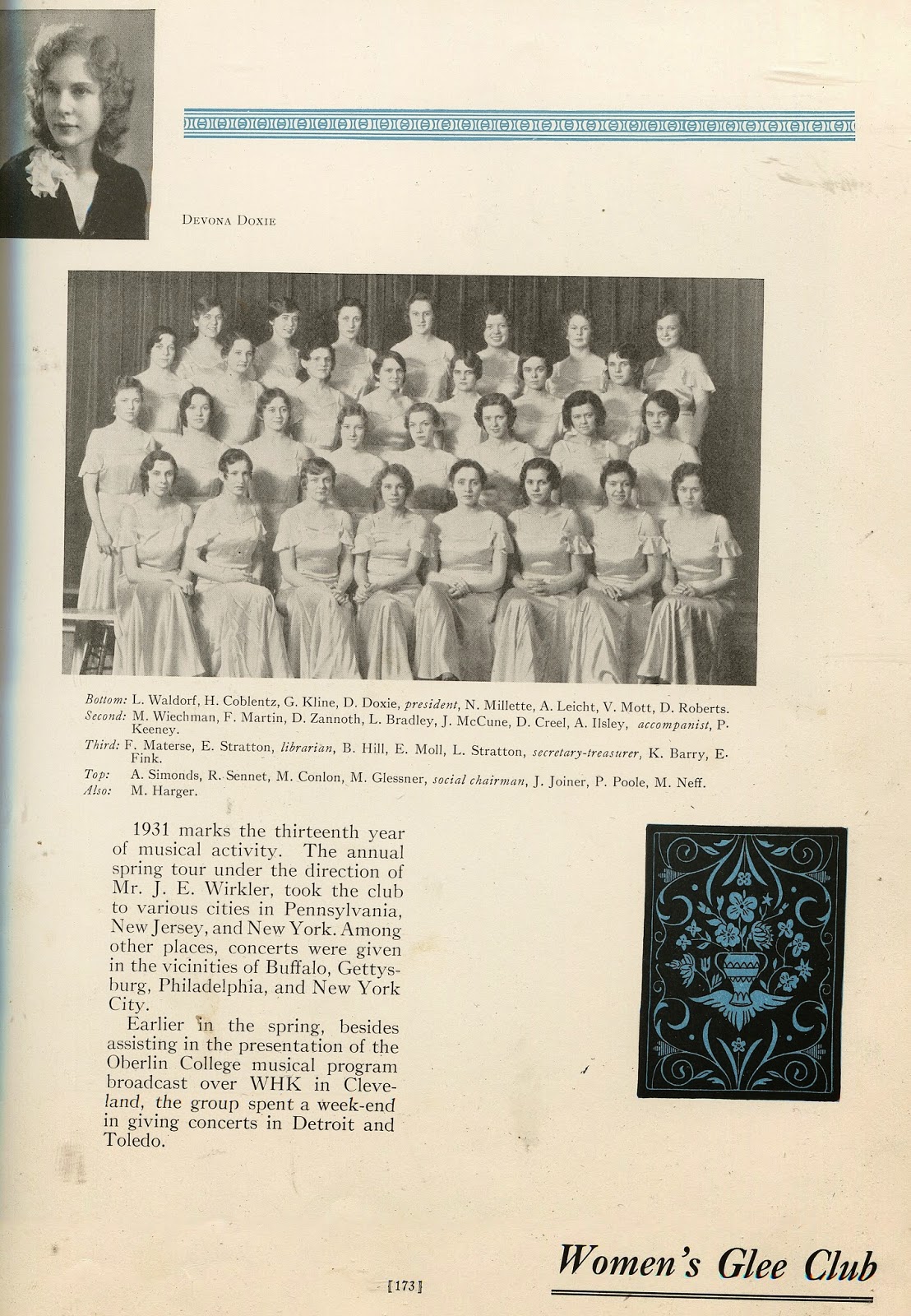 Among the Oberlin traditions at graduation time were a Daisy Chain, when junior girls picked field daisies and wove their stems to form a chain to be carried for the seniors, and Illumination Night, when candle-lighted Japanese lanterns were strung across various areas of the campus. Seniors were permitted to drive cars at Prom time. Going on a jaunt in the car of Jane Randle's parents with Roscoe Bloss and Eddie Pliske, we had an accident with no serious injuries, only sore bruises and distressed Randle parents. The Oberlin Senior Prom was an all night affair, ending with breakfast at Lake Erie after a change of clothes. Again, Eddie Pliske was my escort.
Although I was not close to belonging to Phi Beta Kappa, my grade average was good enough, B plus, that in my senior year I had unlimited cuts for classes and chapel. In June 1932 I graduated    with a Bachelor of Arts Degree. (See picture #6, p. 134f) 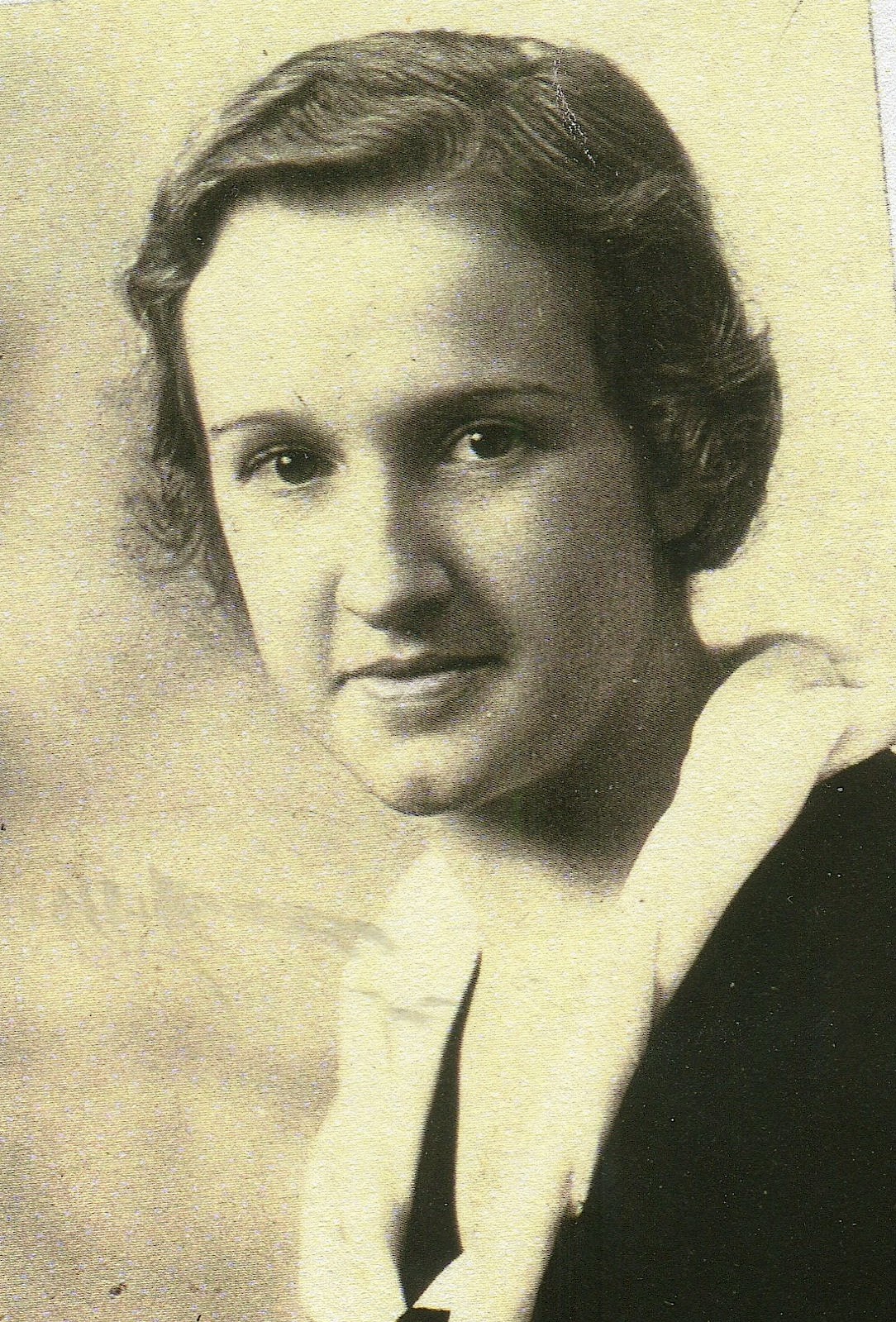 FIRST YEARS AFTER GRADUATION In the fall of 1932, Sarah Hartman, Fran Gillespie (Sarah's best friend at Mt. Holyoke College)    and I drove East in the Hartman Buick coupe. Thinking back on it, I'm amazed that our parents let us do    this. Sarah and I picked up Fran in Pittsburgh, traveling on to New York City where we saw Ginger    Rogers in Girl Crazy. Then on to Annapolis, Maryland, where we were met by Mike Mumma, a cadet we had known in Findlay, who provided us with tickets to a football game and dates for an evening dance.  En route to Boston, Massachusetts, we drove all night through terrible, pea-soup, thick fog.    We were nuts. In Cambridge we stayed with the McNeil sisters, Sarah's and Fran's Mt. Holyoke friends,    in their apartment on the Charles River where I saw the lighted dome of the Massachusetts    Institute of Technology. (Now, in 1993, son Jim is teaching and doing research at MIT.) In Boston we visited the Gardner Museum where I was impressed by a painting of a Spanish dancer, "El Jaleo", by John Singer Sargent. In the wharf area we saw Faneuil Hall and ate lobster in an upstairs sea food restaurant. Our next stop was Springfield, Massachusetts, to visit Sarah's Aunt. The object of the trip to  Springfield (or maybe of the entire trip) was for Sarah to see Walter Jones, a graduate of the Case    Institute of Technology whom she later married. From there we drove to Ithaca, New York, where we attended Cornell University football game and enjoyed the school song with its beautiful harmonies, Shores of Lake Cayuga".


"Religion, religion in Art" Talk
Later that year I busied myself preparing and giving illustrated lectures in my home on the topic,
City. "Religion, religion in Art", renting slides from the Metropolitan Museum of Art in New York Obviously my clientele was ladies from the Presbyterian Church, friends of my mother. Teeny, blackish insects (about one-eighth inch long) crept in under the glass of our Findlay picture frames. We called them "thrips". Our pictures were dotted with these wee bugs.
Posted by Thomas Glessner Weaver at 12:57 PM No comments: