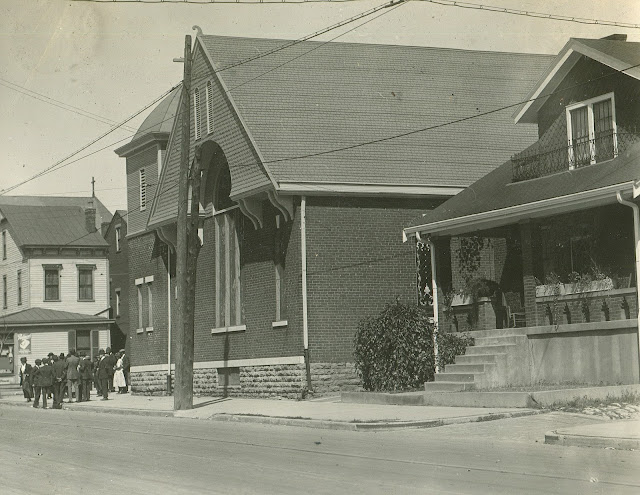 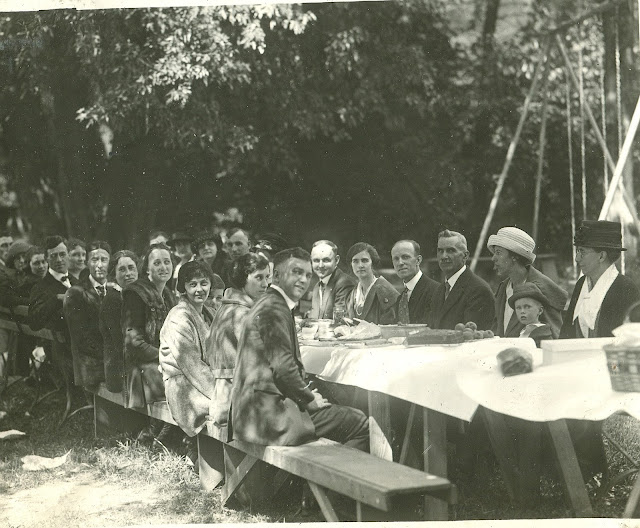 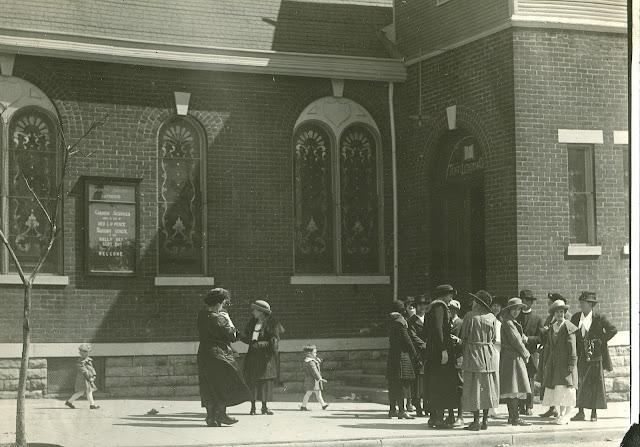 Trinity Lutheran Church over the door, Rev Pence on the sign with a crowd on Memorial Day ? Sign says "Rally Day, Sept 24" ? 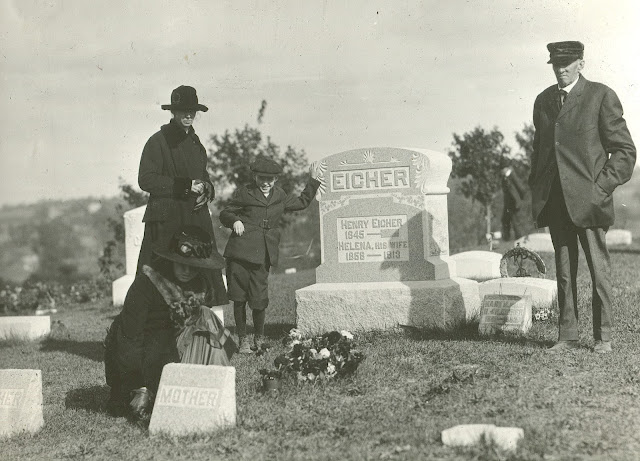 Welcoming Spring with the 42th Annual MayDay Parade in Minneapolis 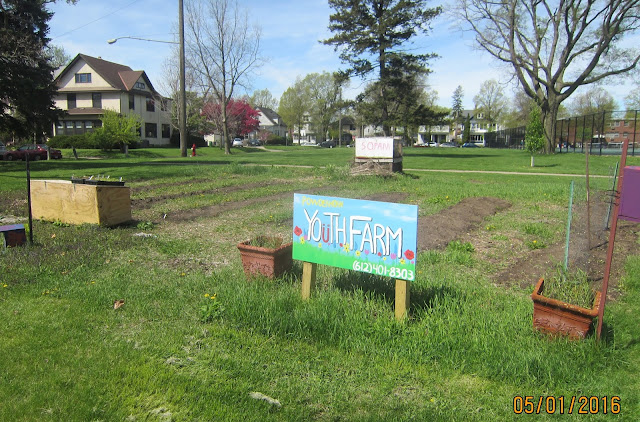 When I arrived on Sunday morning, I parked my van and rode my bike to the west side of Powderhorn Park and visited the Youth Farm, gardens ready for planting. 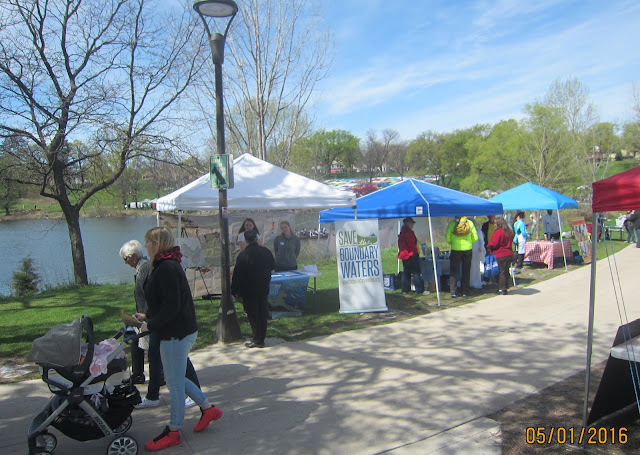 At the north end of the lake, vendors were already setting up at 11 AM with the parade to start at noon.  Met the students supporting the SAVE the BWCA booth and signed yet another petition there...Grateful to see all the environmentally concerned younger generations here. 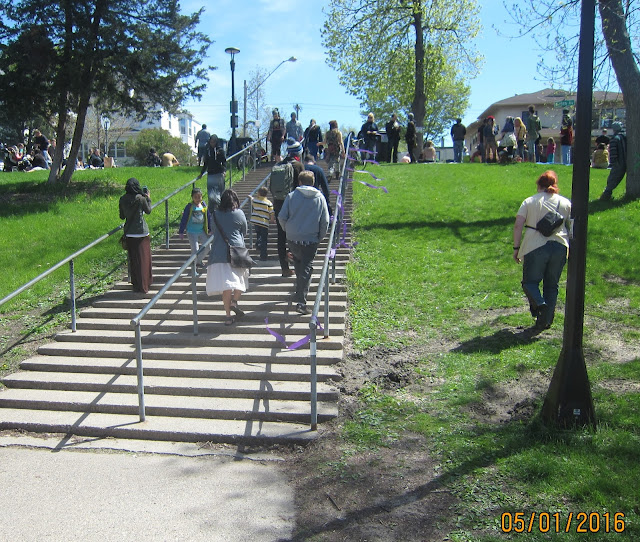 Connected with Bob and we met with our bikes near this stairway up to 15th and 34th where the parade enters the park and noticed the purple crepe paper on the railings and just knew a lot of folks would be honoring our local musical son, Prince Rogers Nelson, who was raised here in Minneapolis.. 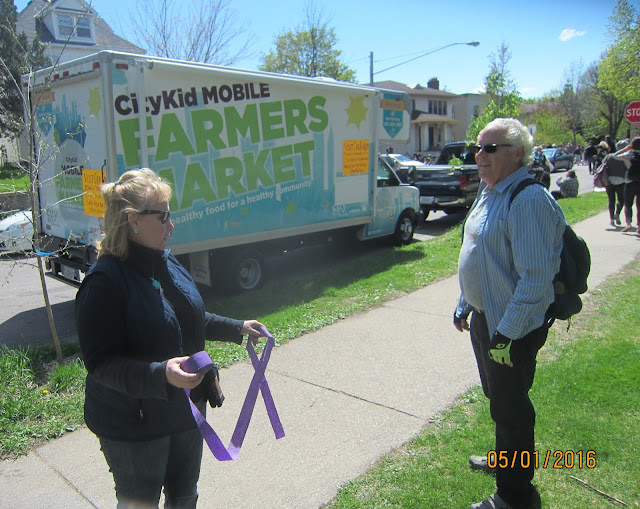 Here is Bob, chatting with the woman who had the vision to share the color purple.  Bob and I each took some to have on our bikes to honor the memory and the music! 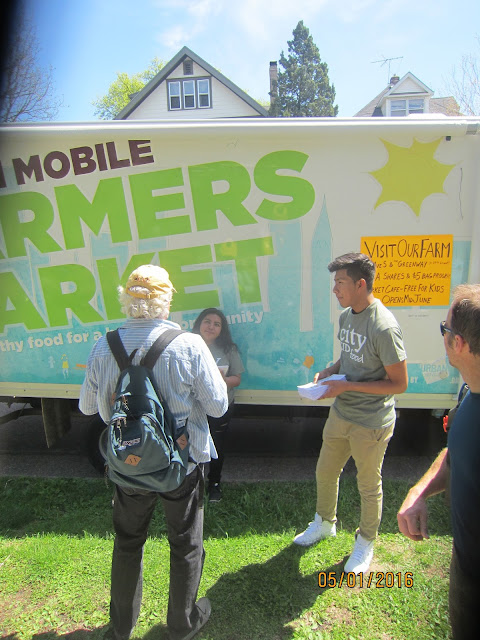 Supporting Youth and local sustainable farming....even got a coupon!  Bob and vendors by the park. 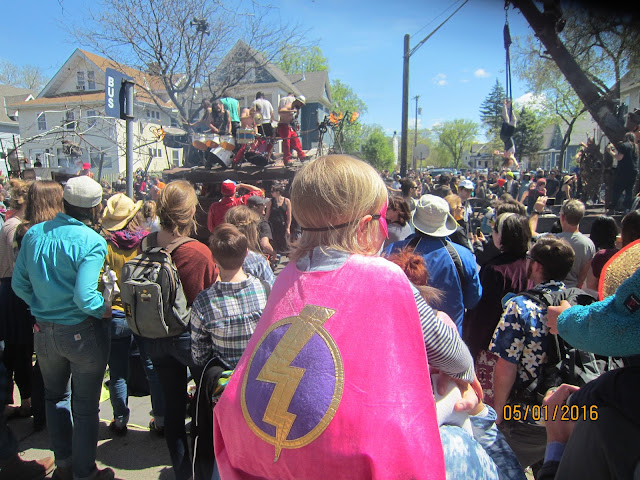 From our spot at 33rd and Bloomington, we met a lot of kids and families there to celebrate the day. The first float of the parade.. 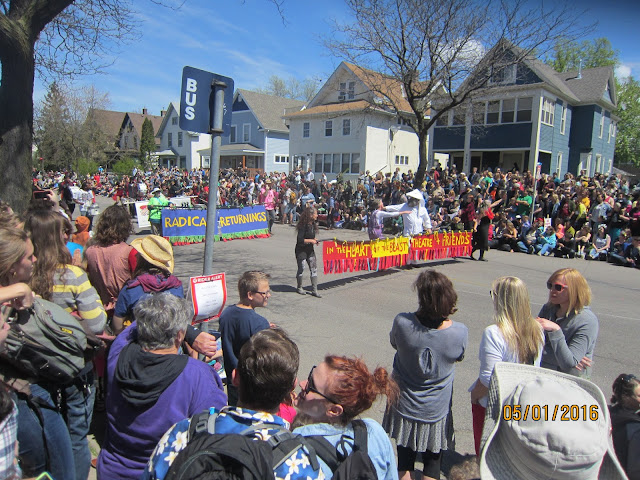 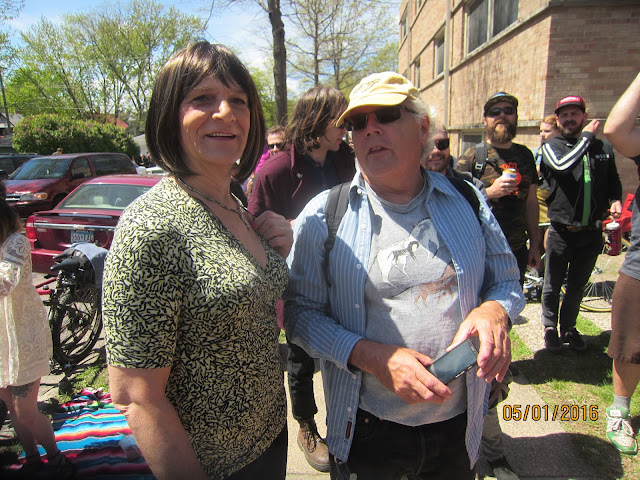 While standing on the corner, Paula Overby came by and met Bob.  Paula and I served together on the Twin Cities Men's Center Board, and she plans to run for Congress as an independent, in the district south of the river, Dakota, Scott, and Rice co. 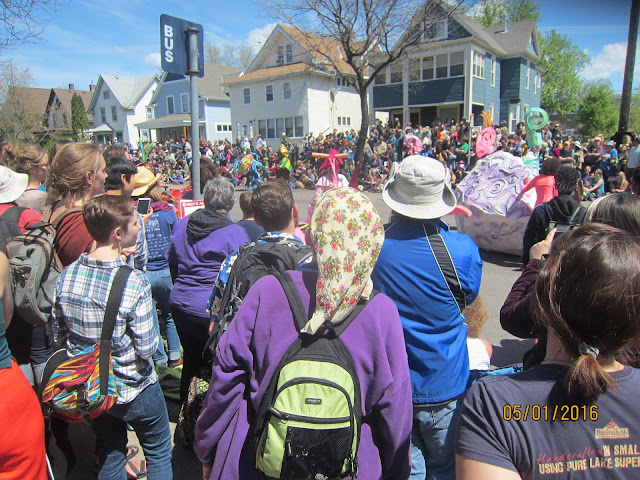 A lot of purple attire along the parade route.... 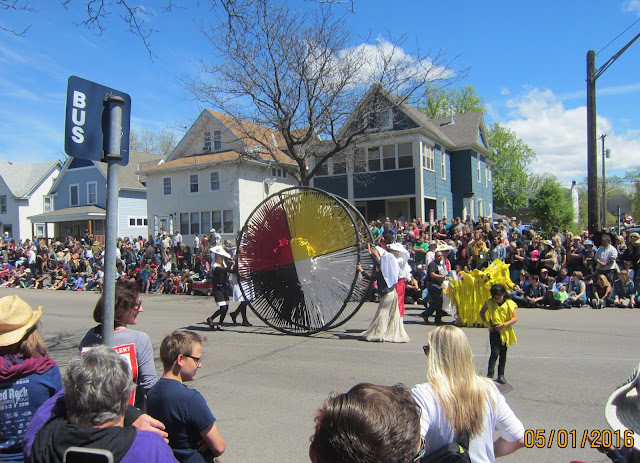 And honoring the medicine wheel, a moving sight for sure. 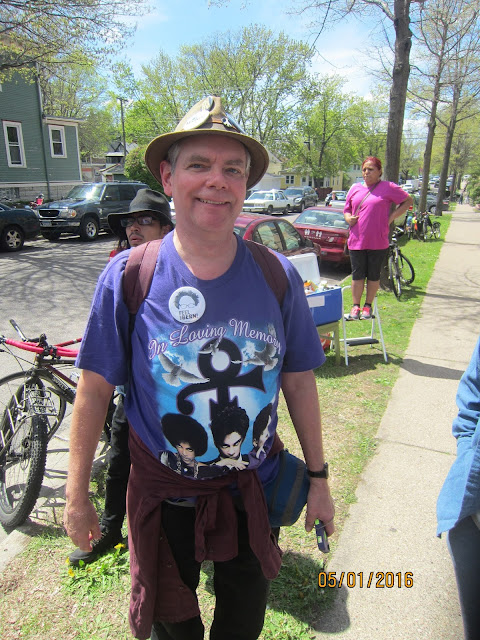 Another St Louis Park resident, and fellow MKP initiate, Rick "Rocky' Gravrok showed up with a Prince with the symbol of The Artist Formerly Known as Prince T shirt.... 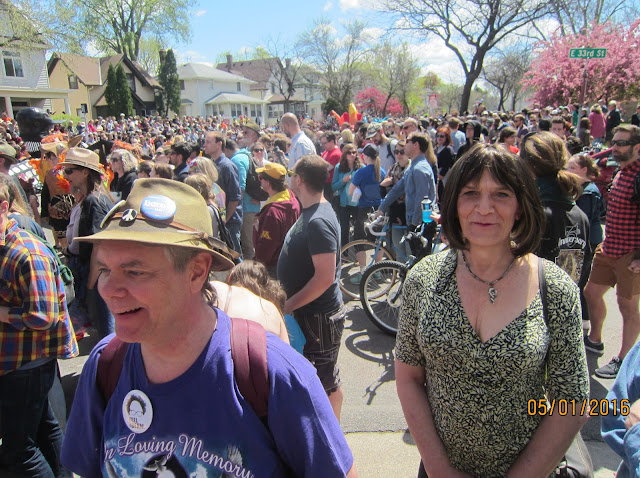 Rocky and Paula were telling jokes to enliven the day. 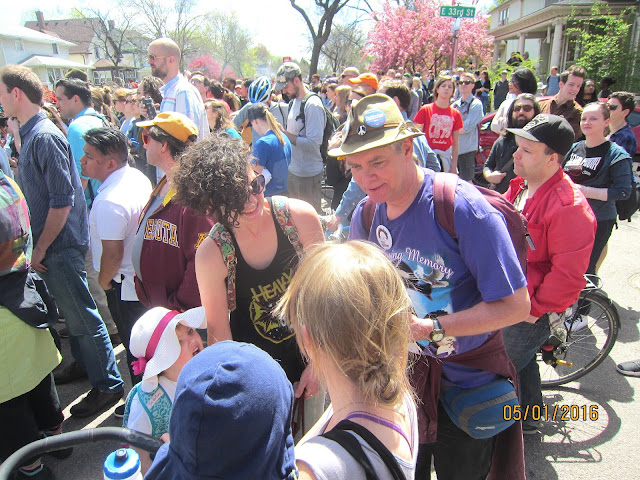 Here is Rocky, the playful geezer, working the crowd with kids jokes... 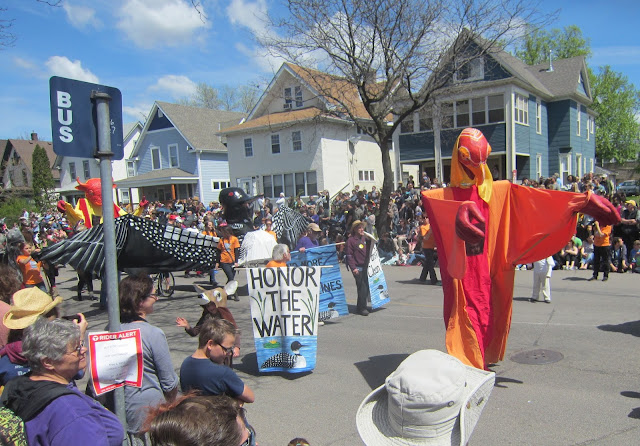 Puppets including the loon, the MN state bird. 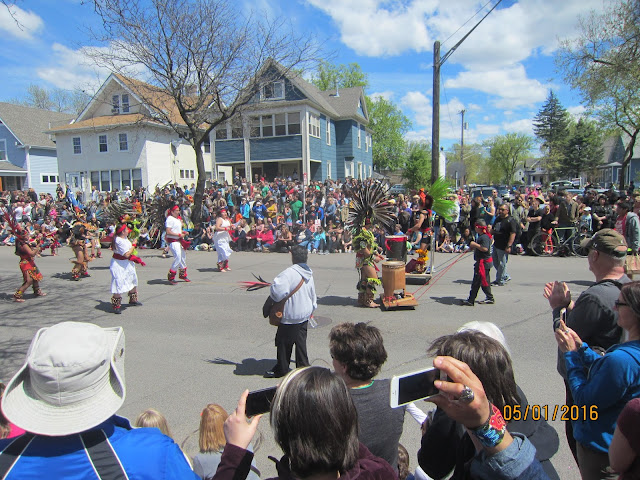 I smelled the copal, a cleansing resin medicine from Central America, before I saw the dancers and heard the drumming.  Mexica, also called Azetec Dancers enliven the atmosphere.  Just prior to Bob's and my heading south with our bikes - as we had other events to attend...grateful for the energy..

Posted by Thomas Glessner Weaver at 5:05 AM No comments: