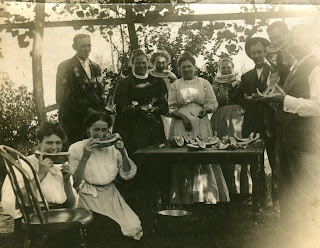 Here is a photo from the early 1900's likely as part of a Brandt Family reunion. My cousins Jeanette Allen Weaver and Wanda Grossnickel Bordeau shared stories when we connected last fall in Ohio. Here we labeled the photo as L to R Ida Esbaugh, Henry Eicher, Edna Eicher, Sarah Eshbaugh, Esther Eicher, Nettie Whiteacre, Helena Paul Eicher, and Missing are the 3 men on the right. 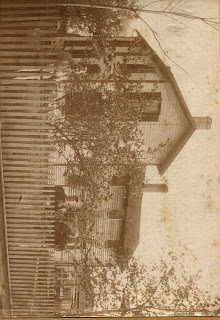 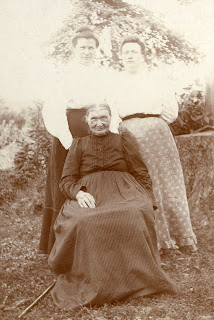 The Stump on the Paul Brandt homestead was the place of many family photos. This one has Mary Brandt in the front with Eliza and Amelia in 1907. 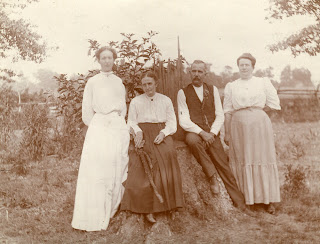 Here is my great Aunt, Esther Eicher, with Minnie and Henry Weitzel and Amelia Paul at the famous stump at the Paul-Brandt Farm homestead. Notice what looks like mullein in the hand of Minnie. I common plant that goes in waste areas. Fun to see the detail a century later. 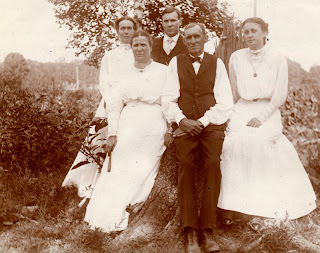 Eicher Family Paul George Tree Stump, Labeled Aug 18, 1907. Here are my greataunt, Esther Eicher, her mom, Emelina Helena "Lane" Paul Eicher, with her developing thyroid goiter, she died in 1913 after surgery for the goiter, Charles Albert Eicher, Henry Eicher, Edna Helena Eicher, who married Noah Elwood Weaver in Aug of 1909. They were my grandparents.
Posted by Thomas Glessner Weaver at 7:54 AM