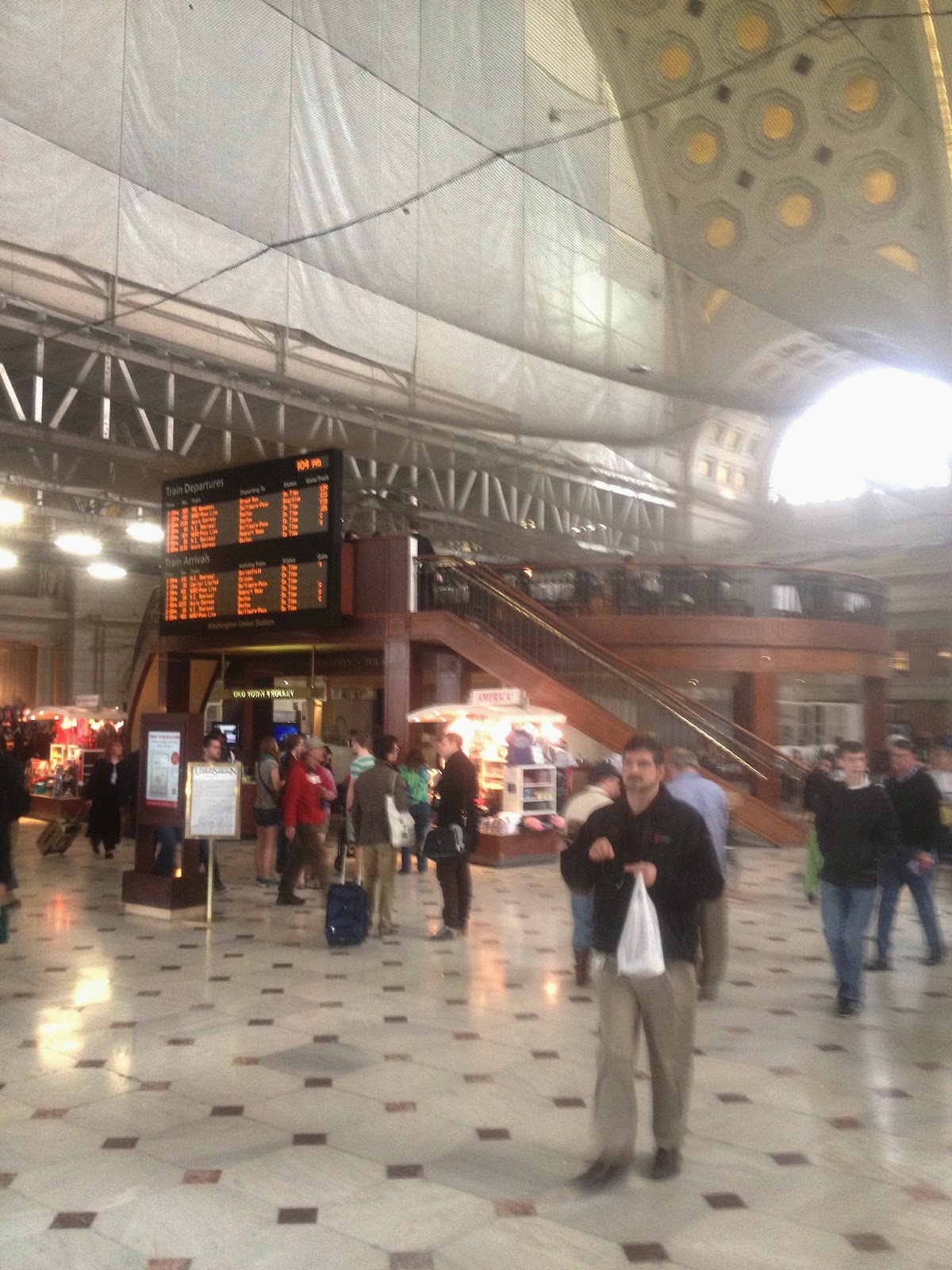 Arrived at National (Reagan) airport along the Potomac in VA around 11 AM.  David Frye my host in DC, works at the SEC Building around the corner from Union Station, where I took the Metro Red Line transferring from the Yellow that I hopped on at the airport.   Here is a view from the cafe where we had lunch in the Station.  Doing repairs after an earthquake a couple of years ago 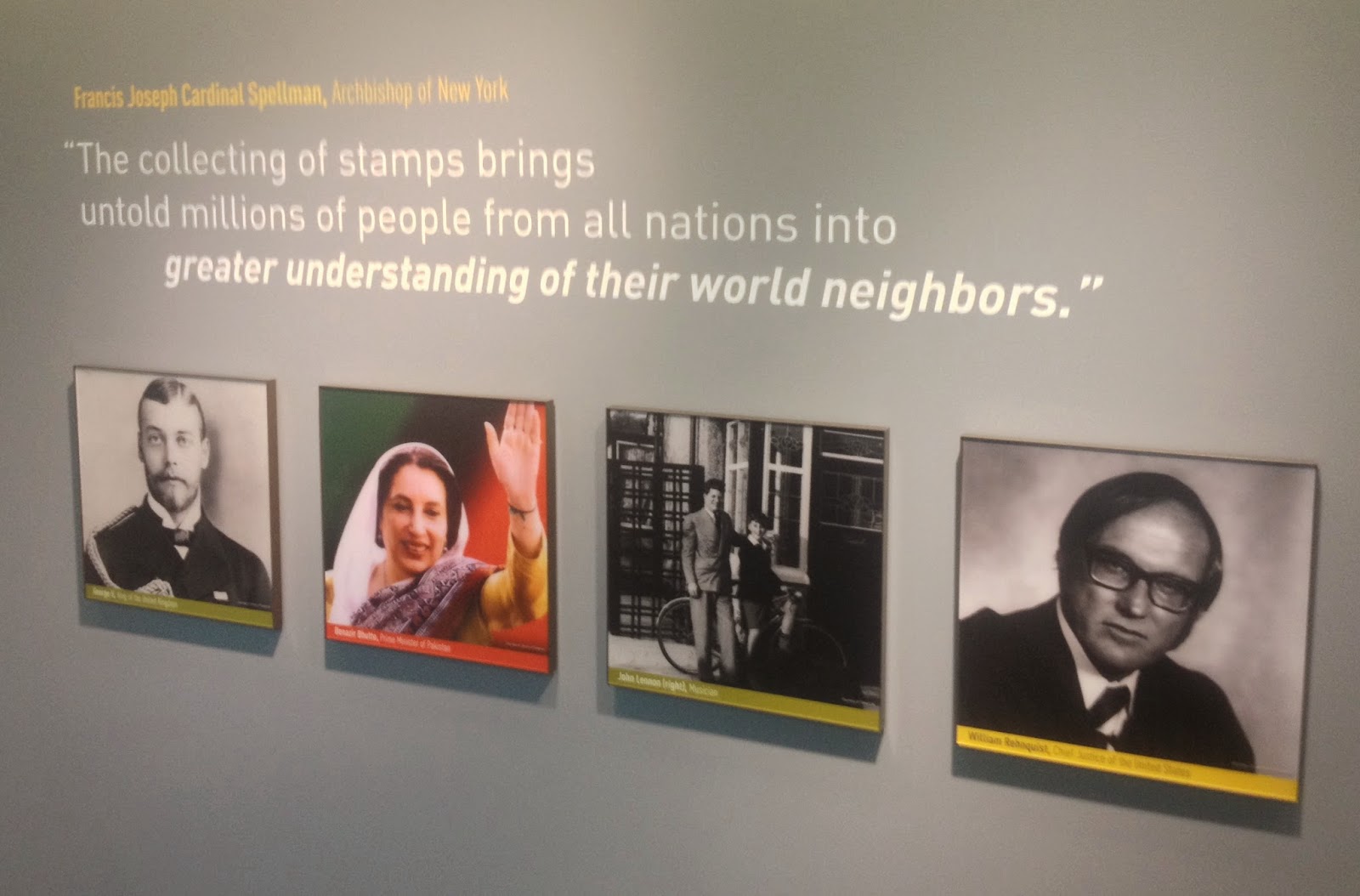 Went to the nearest Smithsonian Museum the National Postage Museum at the old main PO just across the street from Union Station.   I always loved the hobby of stamp collecting and shared by many over the world.  I was struck by who has been stamp collector.  3rd photo is John Lennon with his dad.....all these photos on my iphone that is new....My other camera holds many, and I forgot to bring the cord attachment. 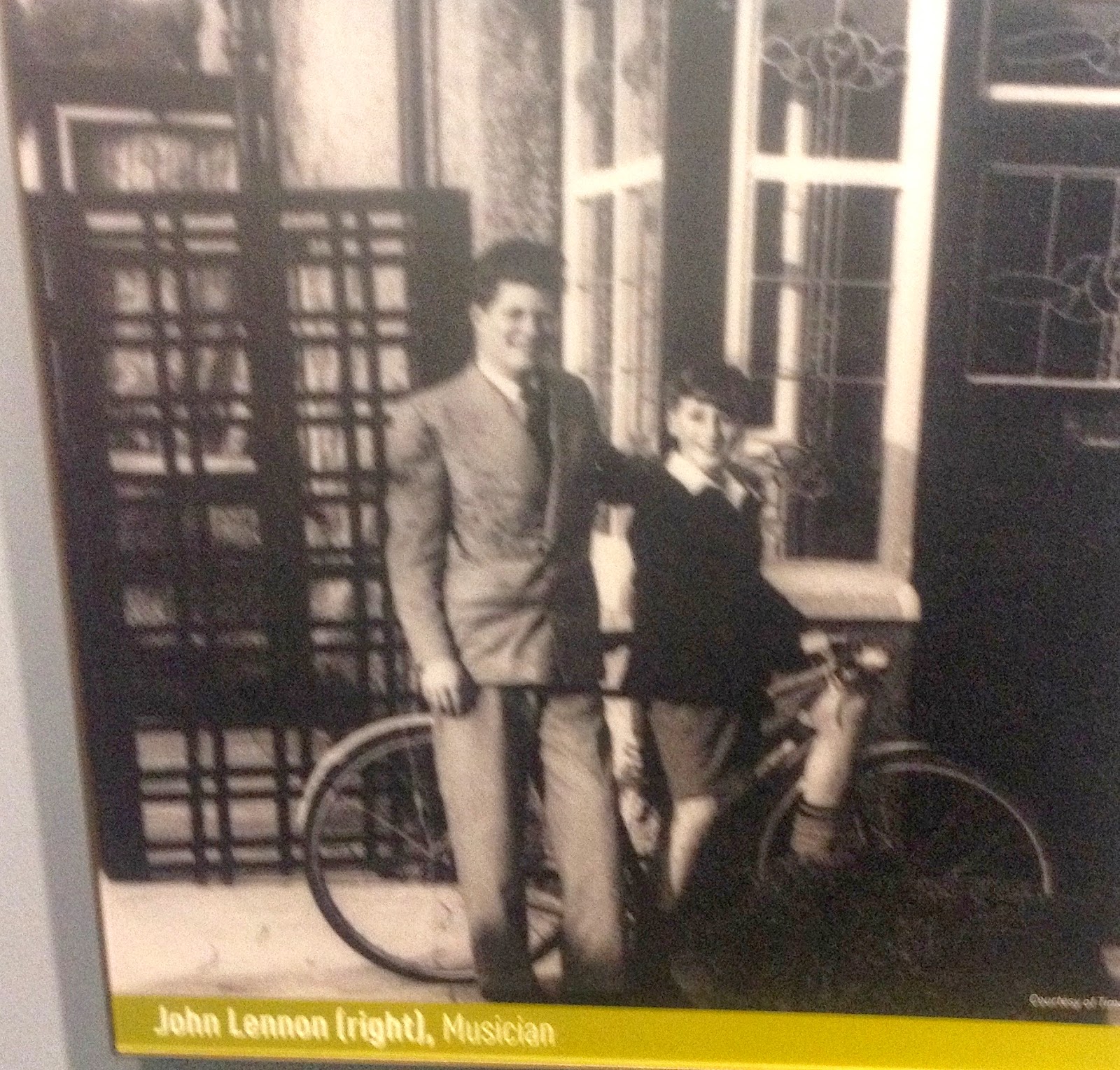 John Lennon, another stamp collector, with his dad. 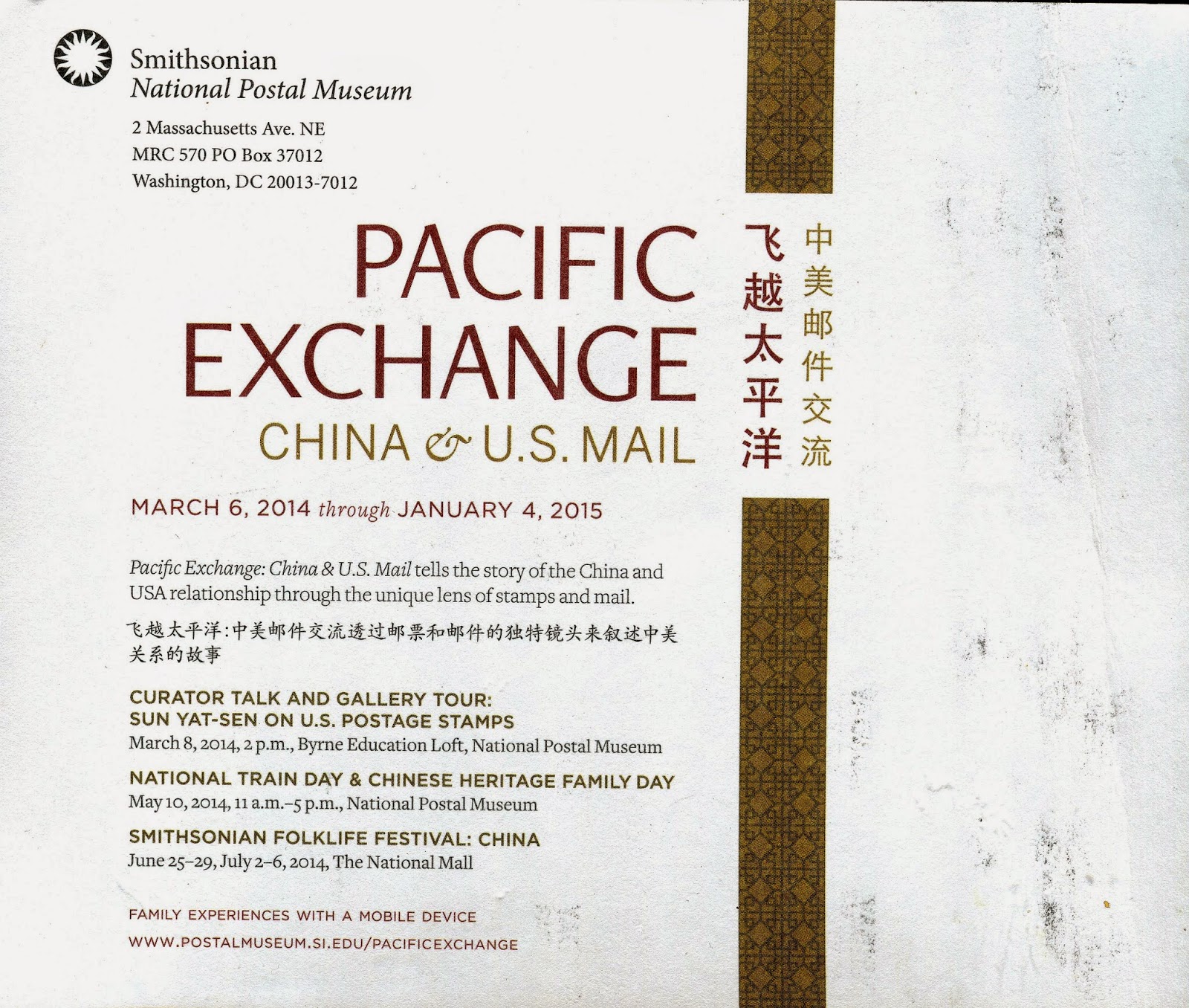 The word Exchange, to me, implies a balance, a back and forth.  How mail is exchanged...in the past, letters were shared over time.  My collection of stamps as a kid allowed me to exchange stamps of the US and United Nations with other kids in the 1960's.   I had friends in New Zealand, Australia, Southern Rhodesia, Czechoslovakia, Tanganyika, during my teenage years... 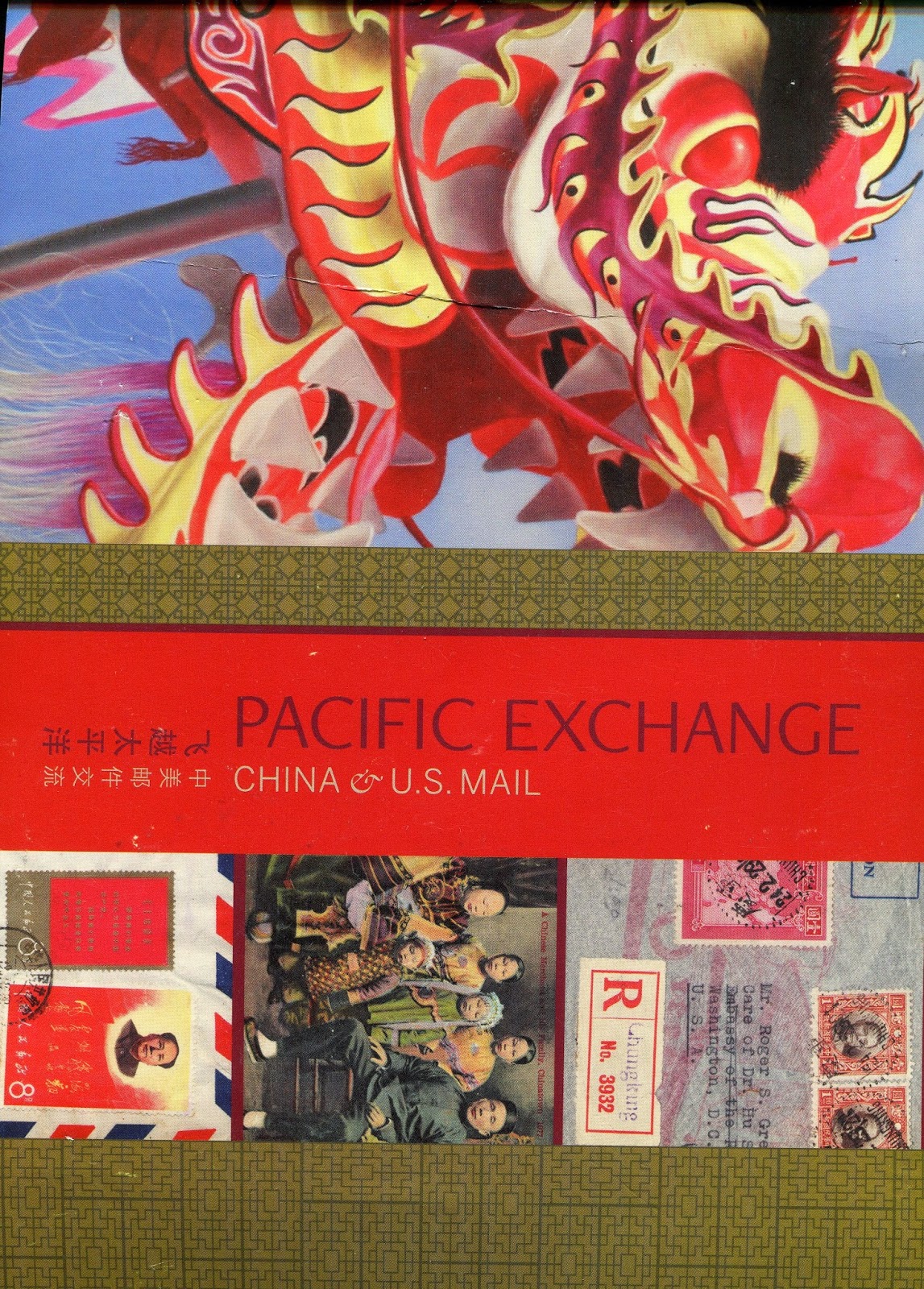 Being a long term philatelist since childhood, many of you may know I collected stamps from Taiwan, the only "China" we could recognize in the 1960's.  I have many stamps from Taiwan and more recently from PRC..
Here is the card introducing the Exhibit at the National Postage Museum 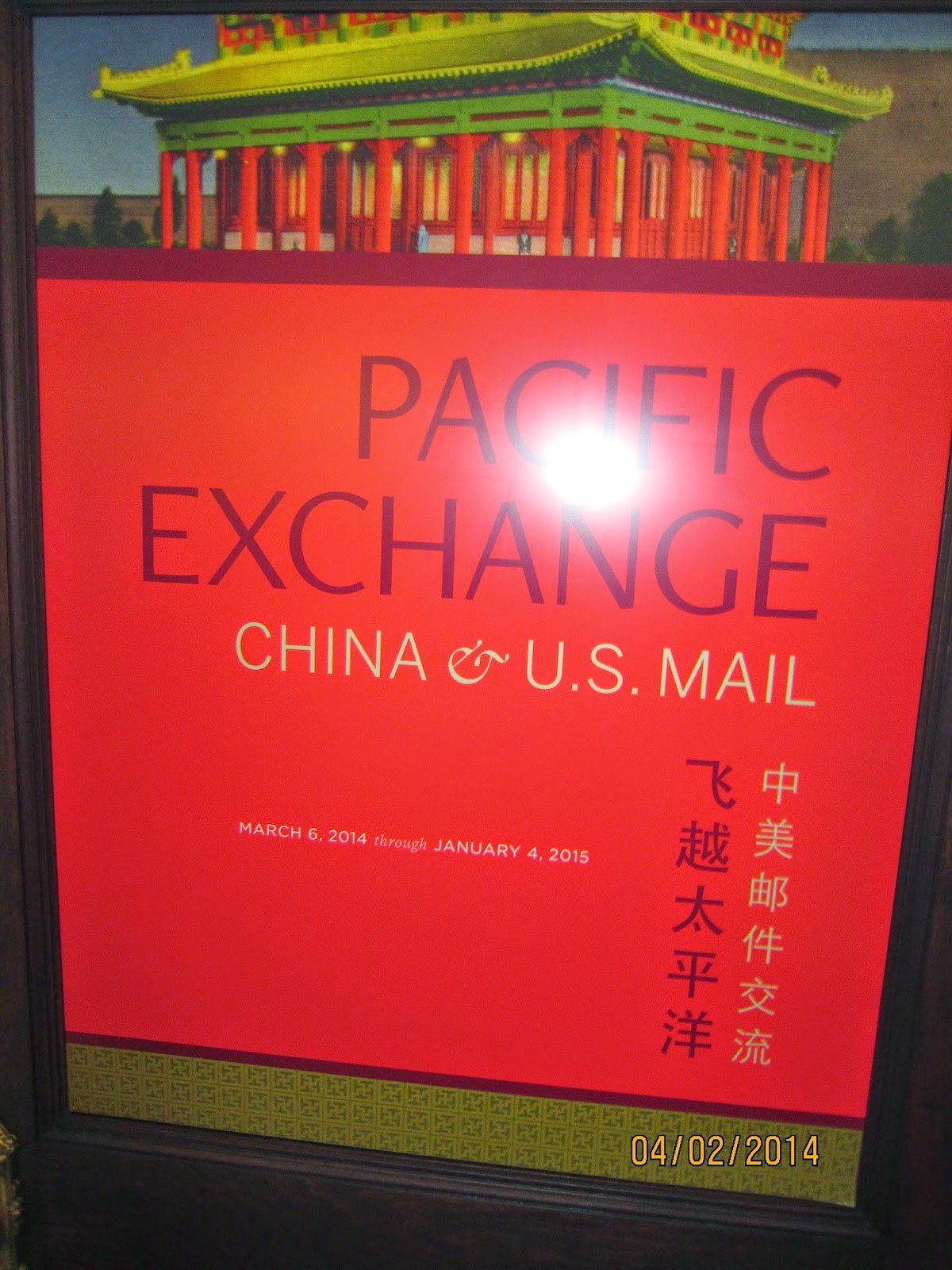 Here is the colorful inviting poster of our two nations, China and US Mail History... 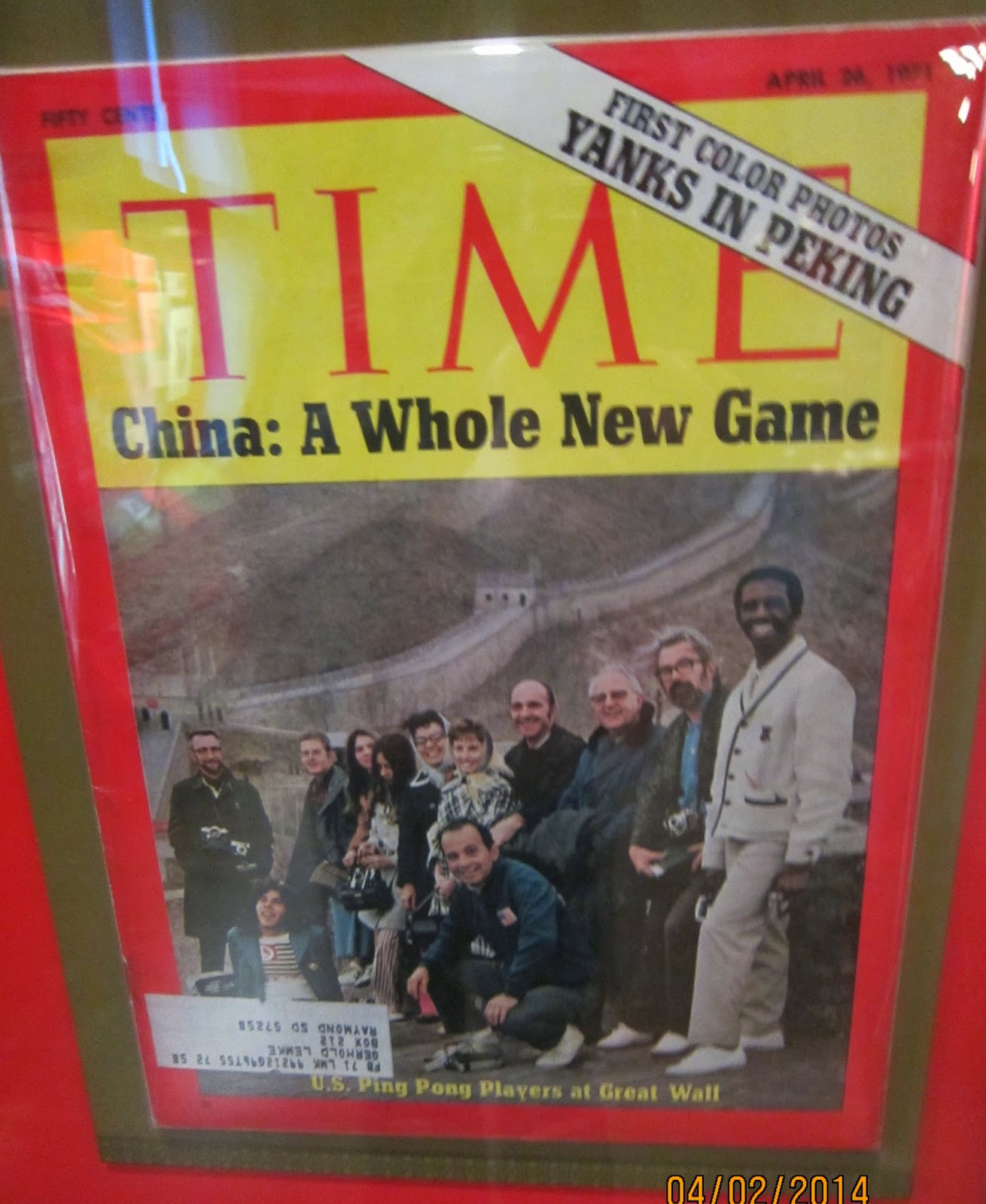 I remember in 1971, when I went to the Soviet Union when relations started thawing.  Here in the April 26, 1971 cover of Time Magazine.. see  http://en.wikipedia.org/wiki/Ping-pong_diplomacy
Ping-pong diplomacy (Chinese: {{{3}}} Pīngpāng wàijiāo) refers to the exchange of table tennis (ping-pong) players between the United States and People's Republic of China (PRC) in the early 1970s. The event marked a thaw in U.S.–China relations that paved the way to a visit to Beijing by President Richard Nixon. 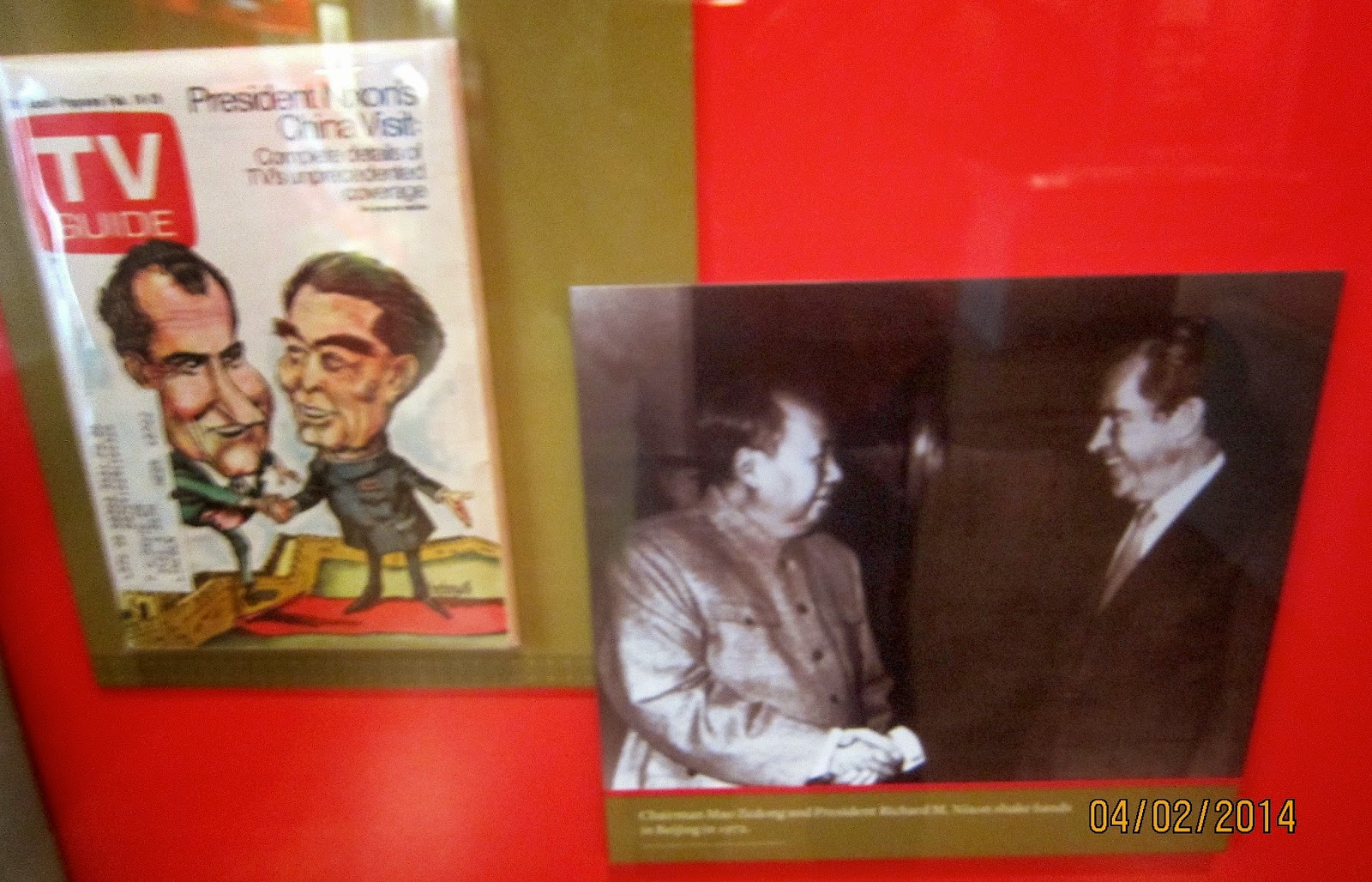 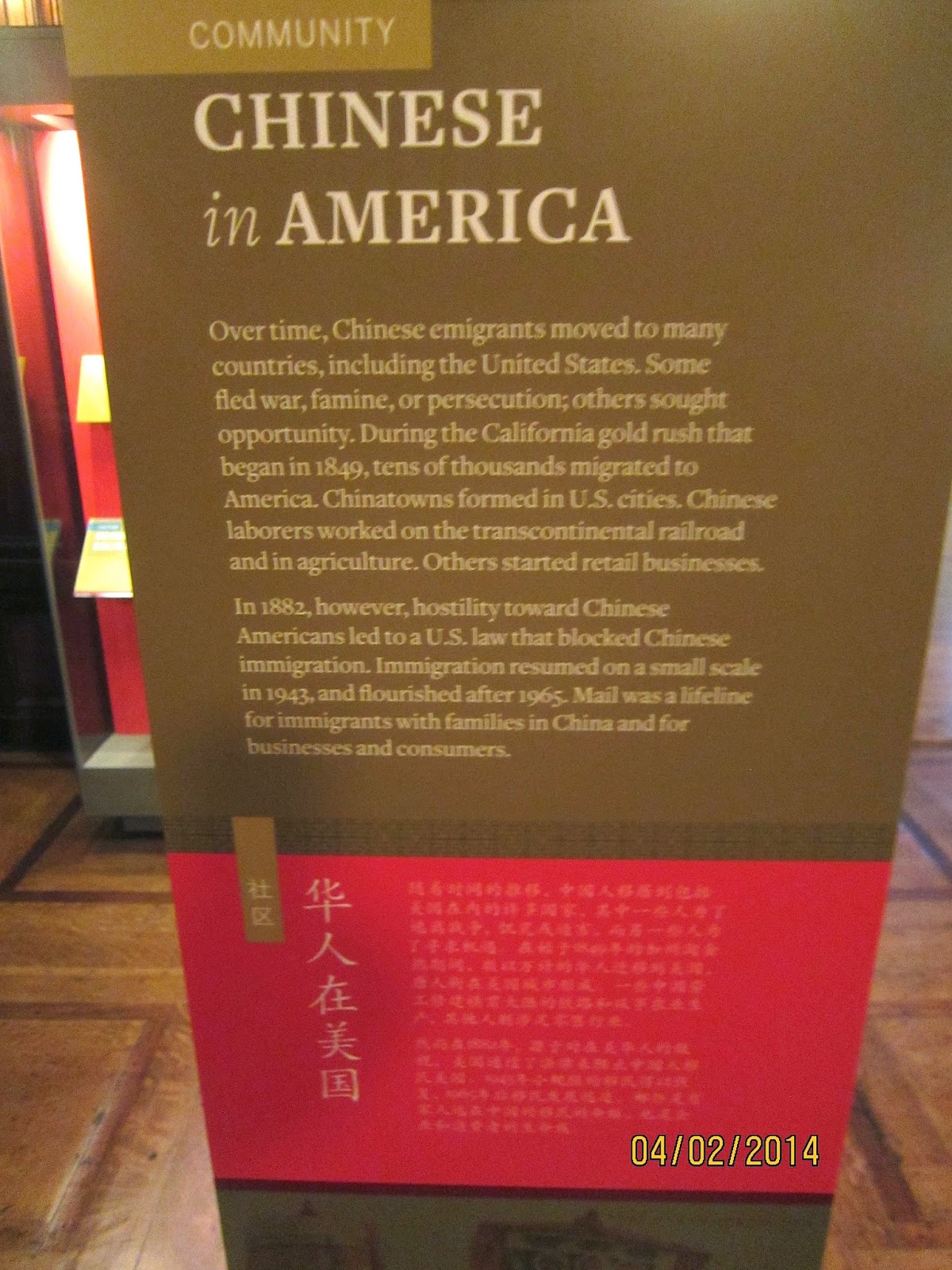 The history of Chinese immigration to the US of A - Mail as a life line between people and families.

From my collection...1939 envelope 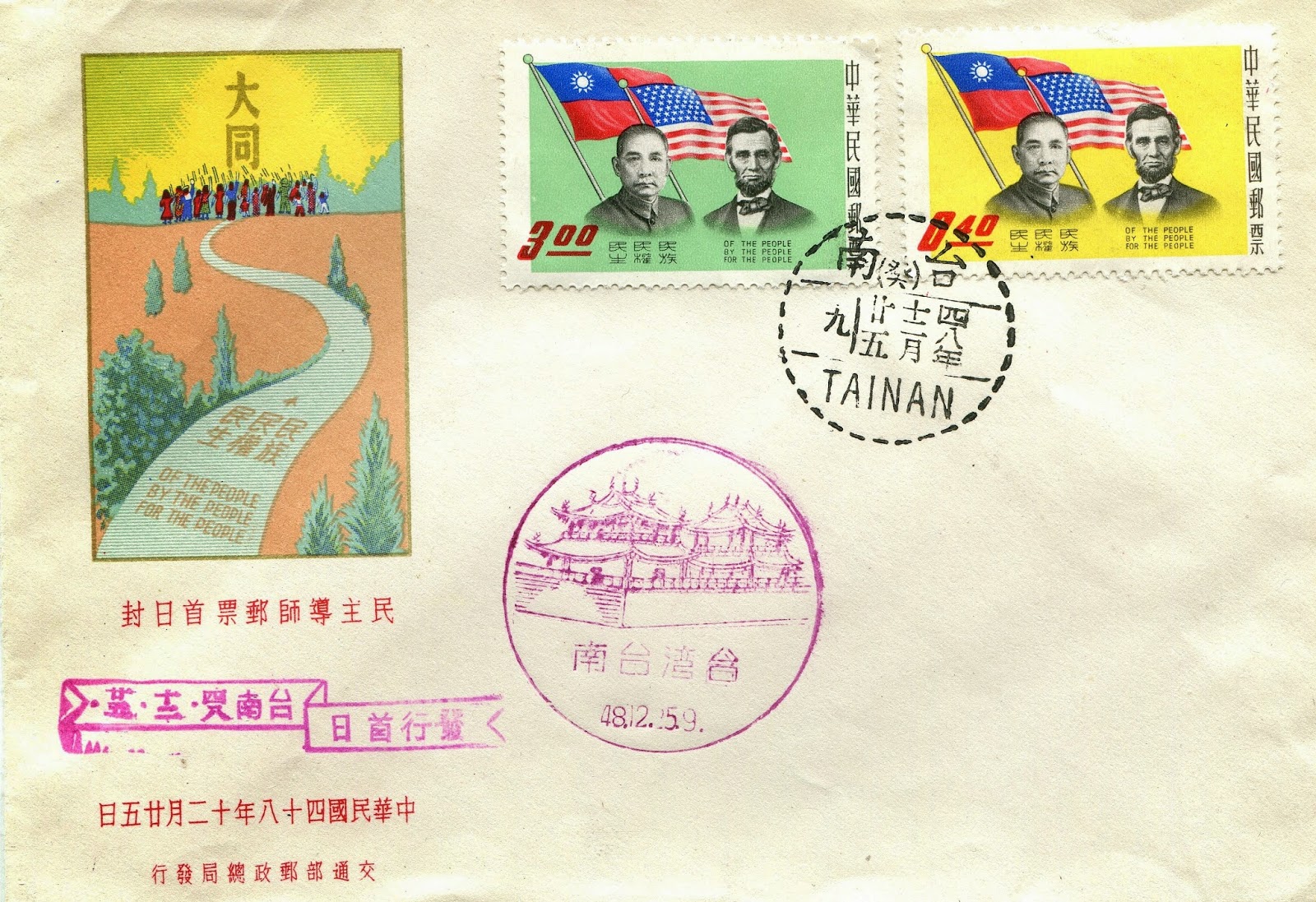 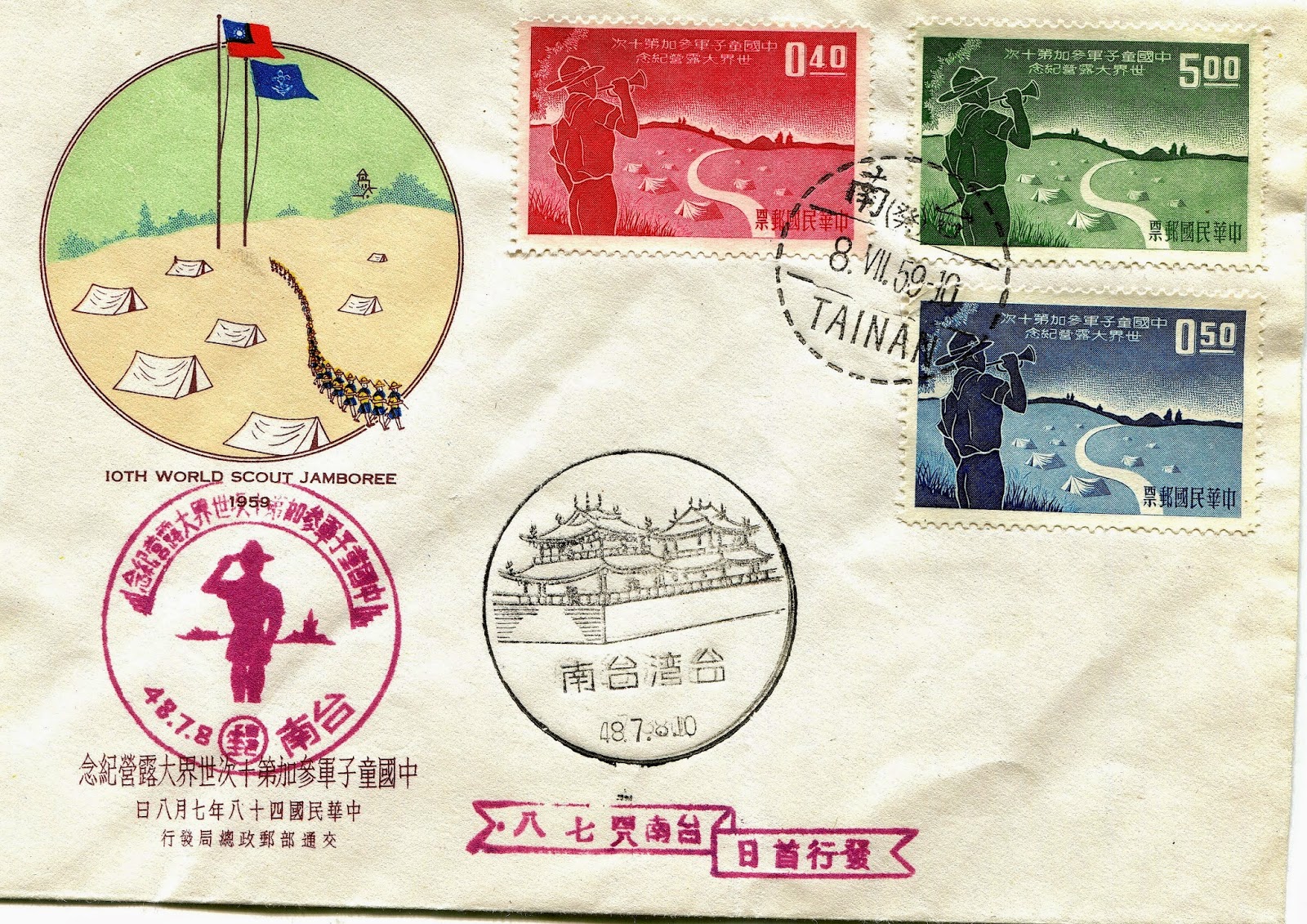 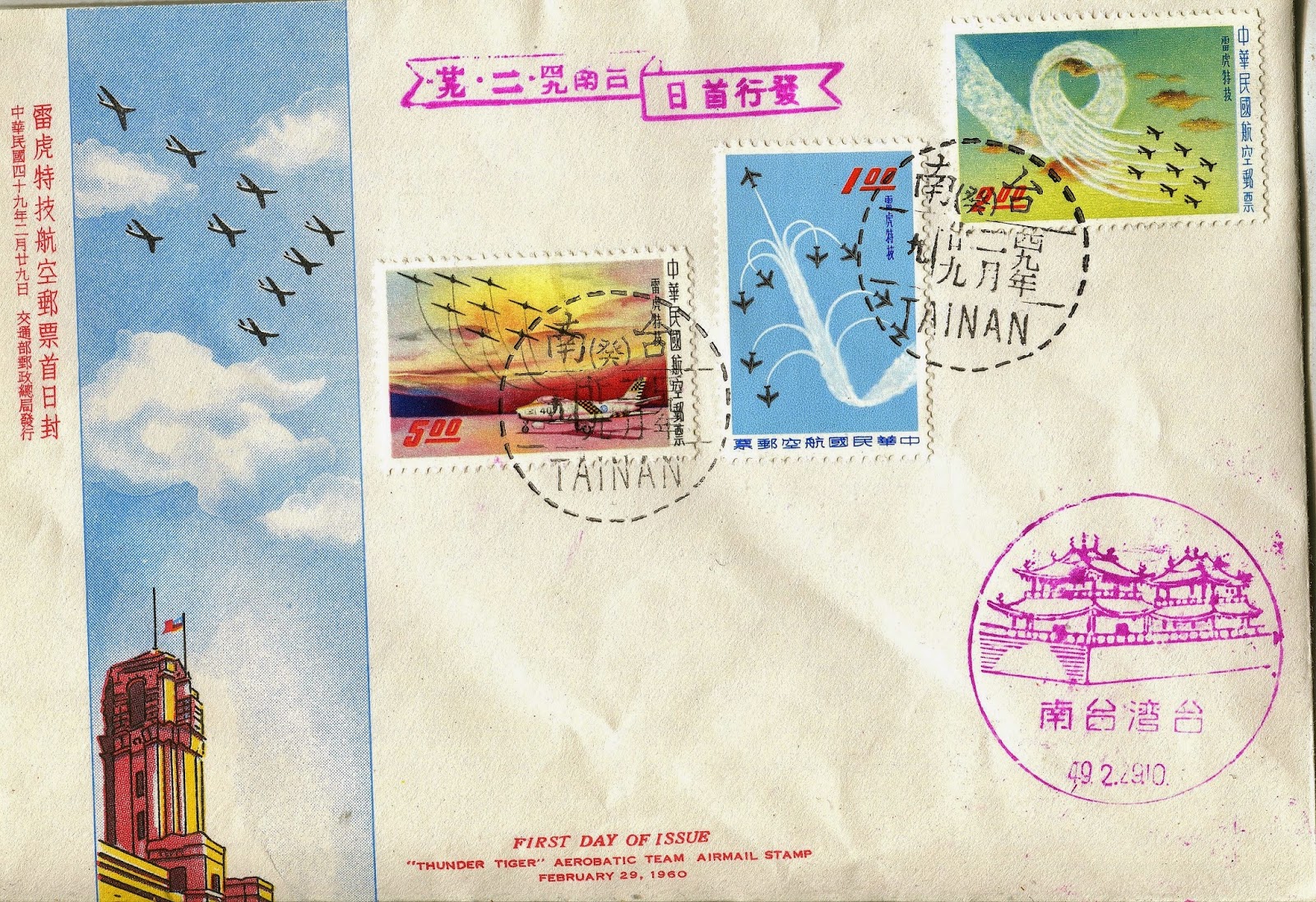 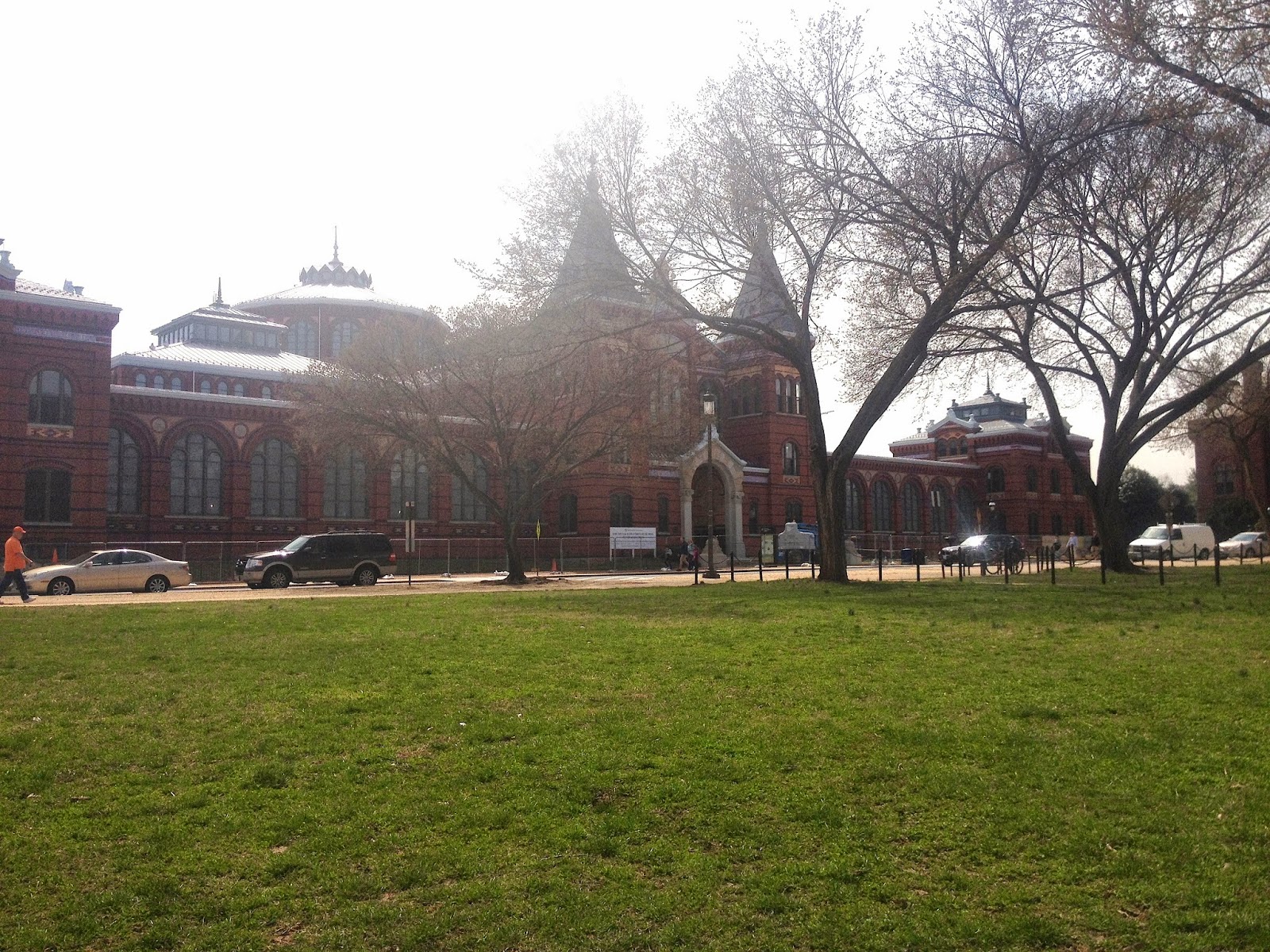 I sat on the grass at the National Mall and took a few photos of the  same Smithsonian Buildings that my dad and grandparents visited in 1928.  Closed for a remodel.  I did visit the Air and Space Museum next door crowded with curious young people, and then walked into the Castle where I got some maps and a bottle of hard cider as the temp was such that liquid refreshment was important! 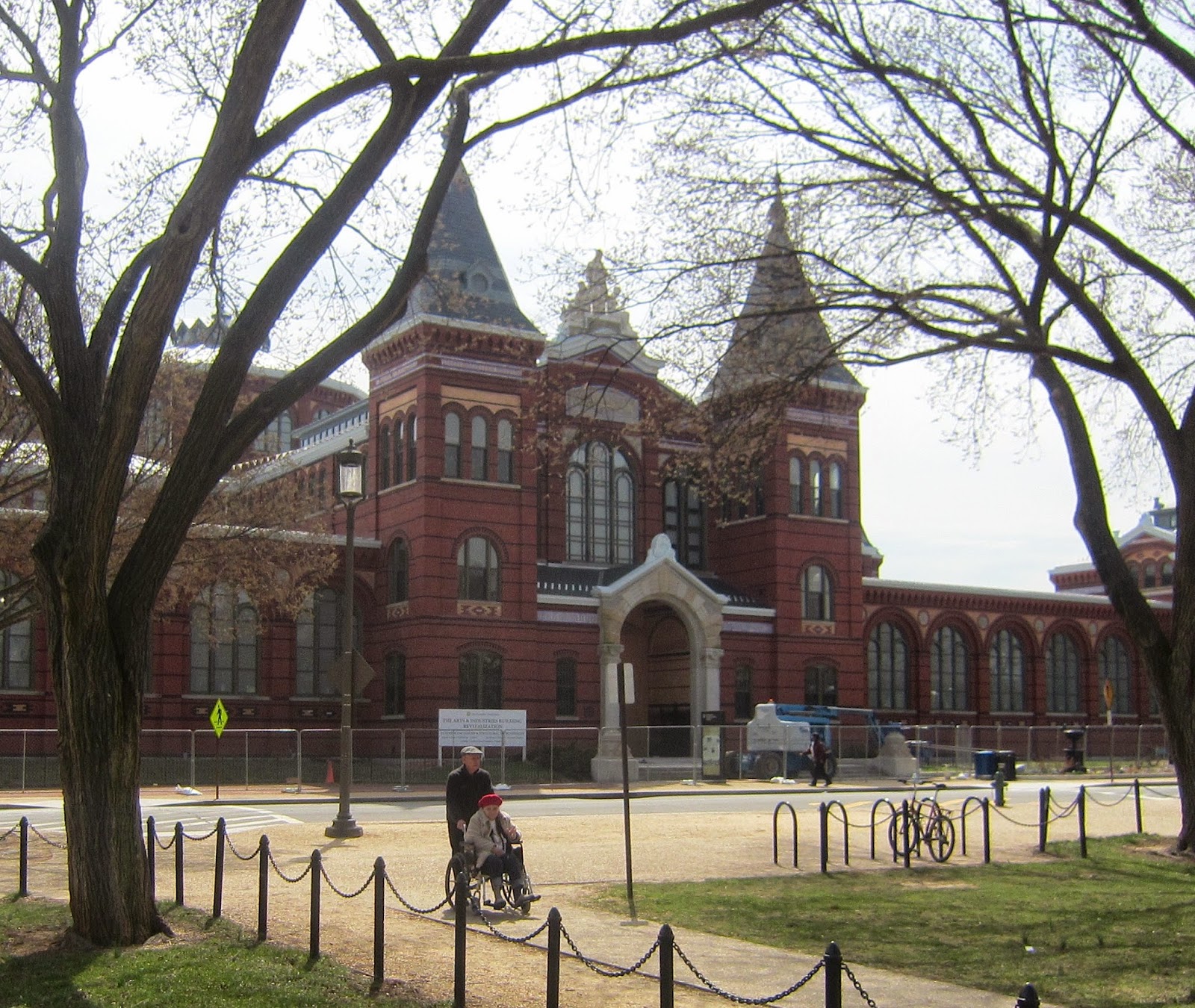 The Arts and Industry Building in 2014.  Looking from a similar view that was in 1928.
see   http://prairielakesjourneystwospirit.blogspot.com/2014_03_01_archive.html 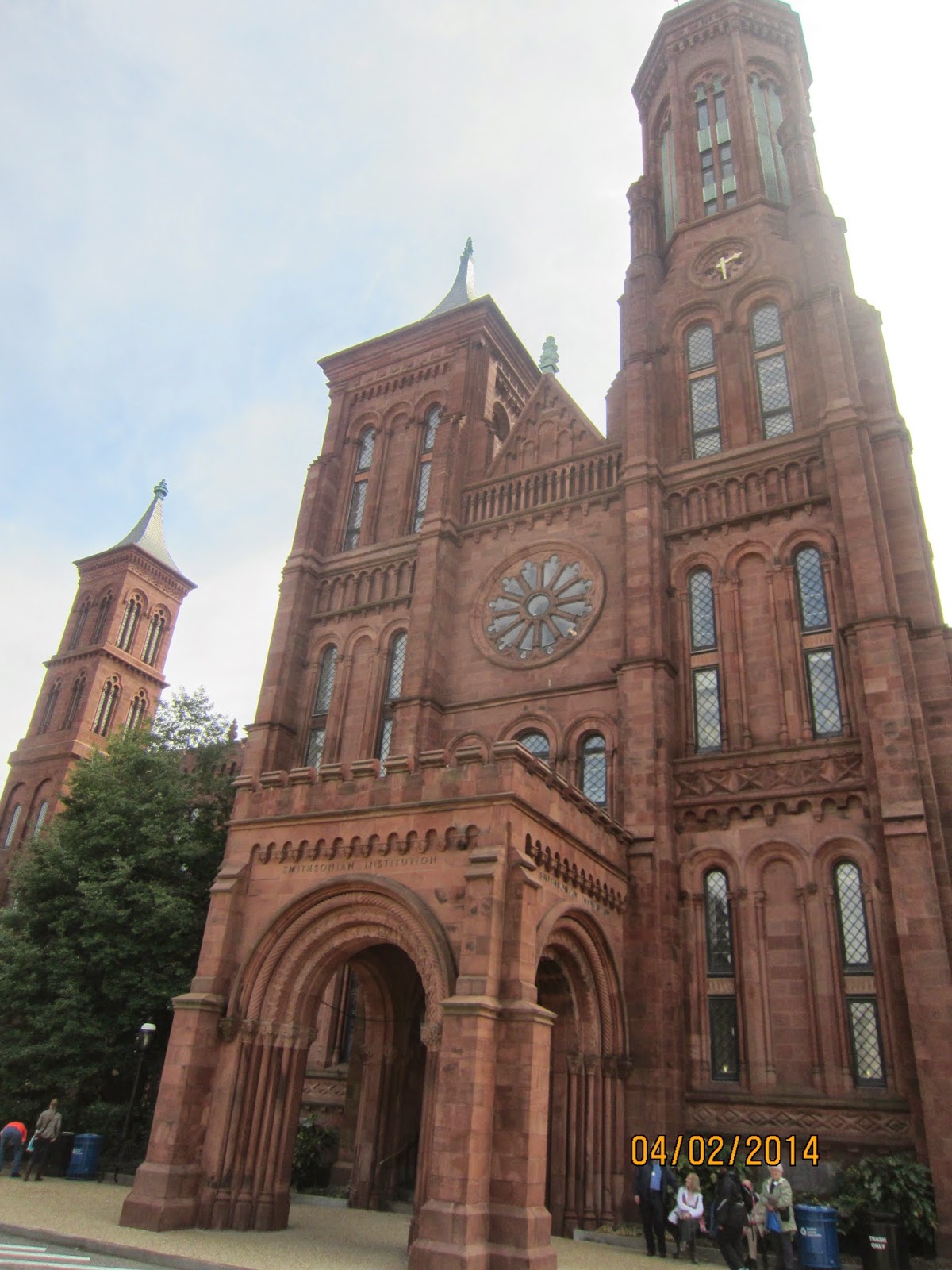 The Castle, the original building donated by Smithson.  I was led to go inside from the garden in the back.... 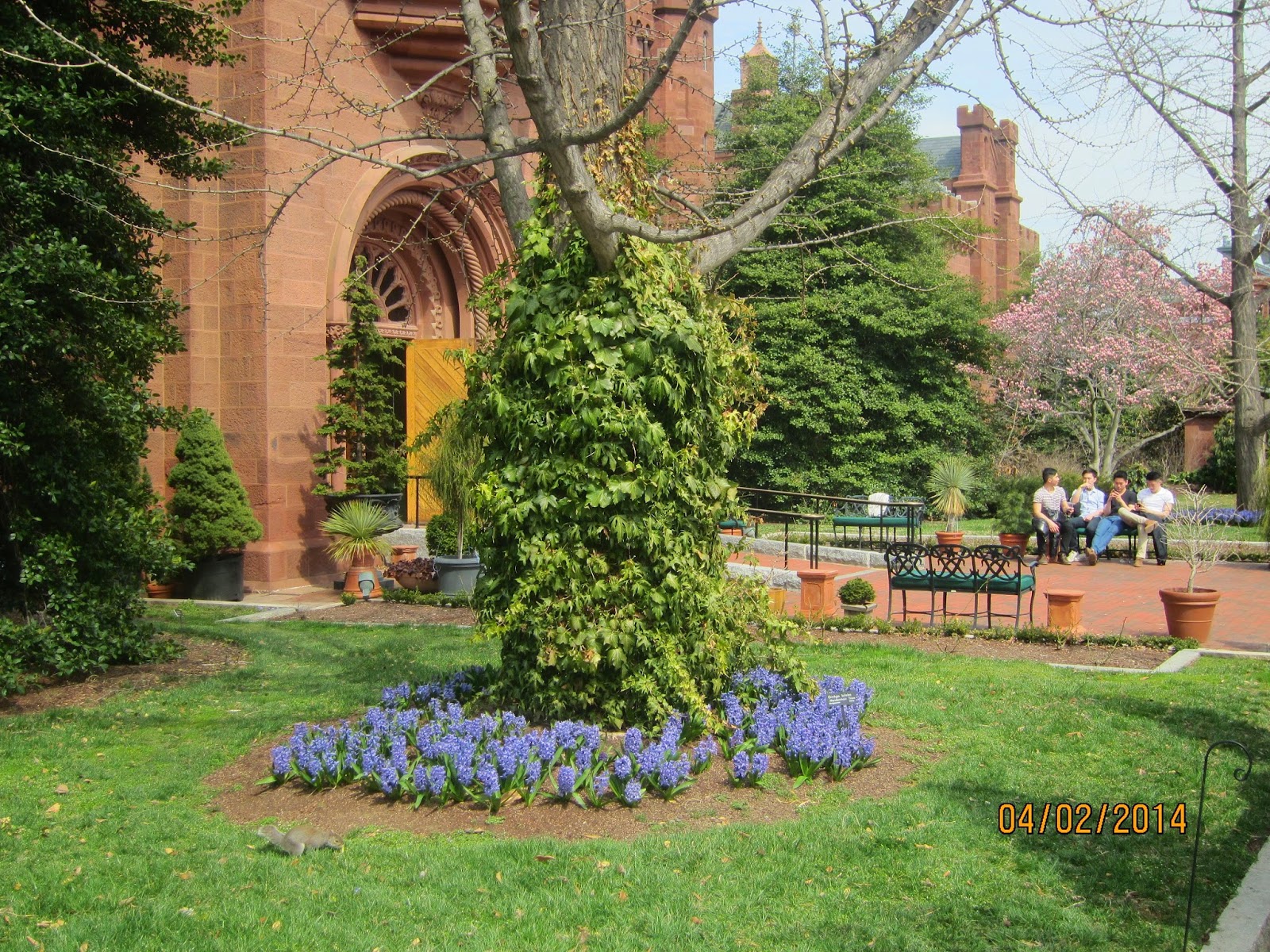 I noticed the four young men walking this way, and I was led to go in here, and have a nice cool cider......at the visitors center..
http://www.si.edu/Museums/smithsonian-institution-building 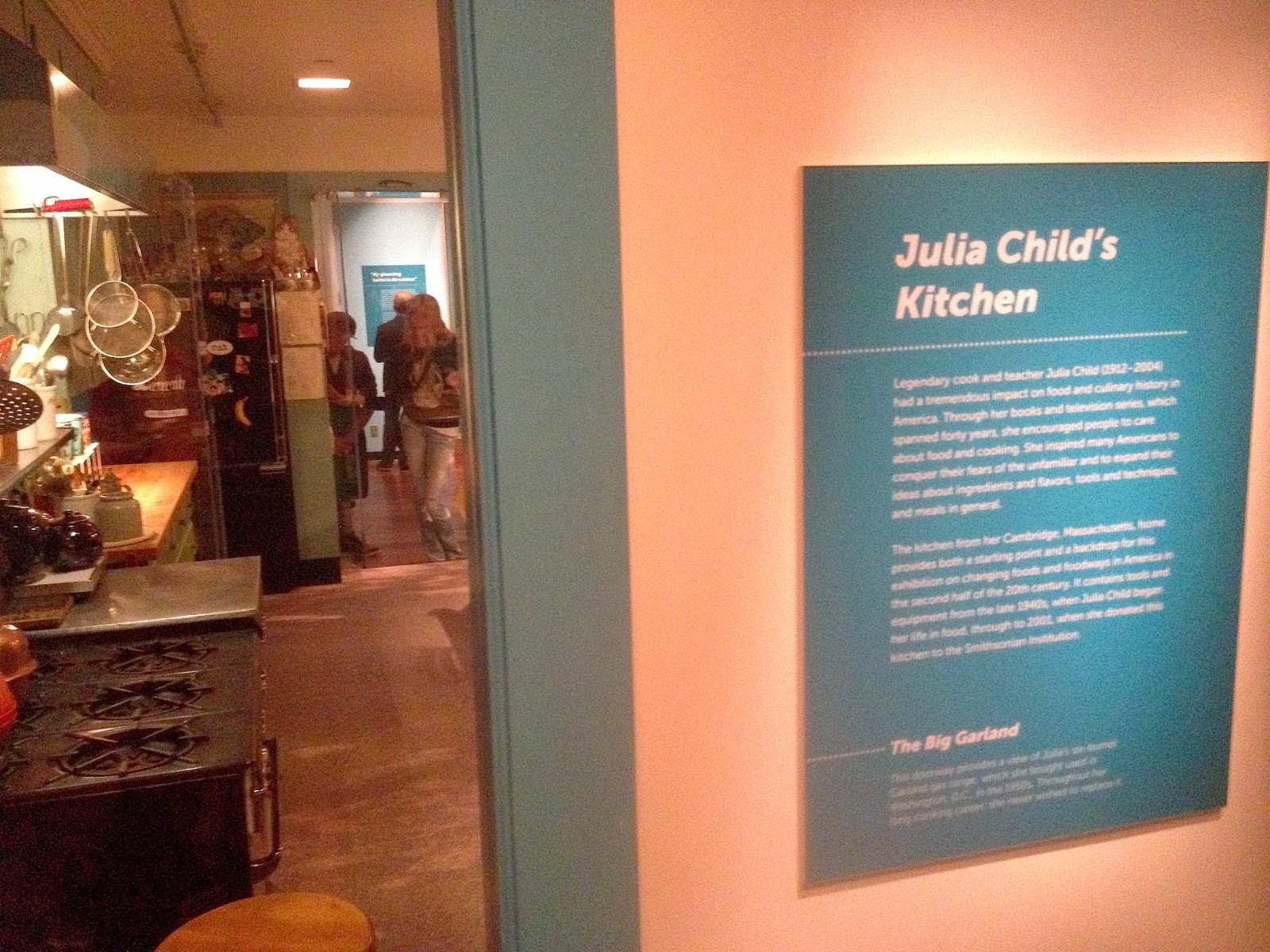 From the Castle I walked to the other side of the Mall..A highlight for me, was the visit to the National History Museum where I made a bee line to the basement to take in Julia Child's Kitchen.  They have a loop of many of her TV show with other cooks that are just hilarious. Such a great teacher!   I hoot.  I sat there for nearly an hour and just took in the comments of the variety of people from all over the world! 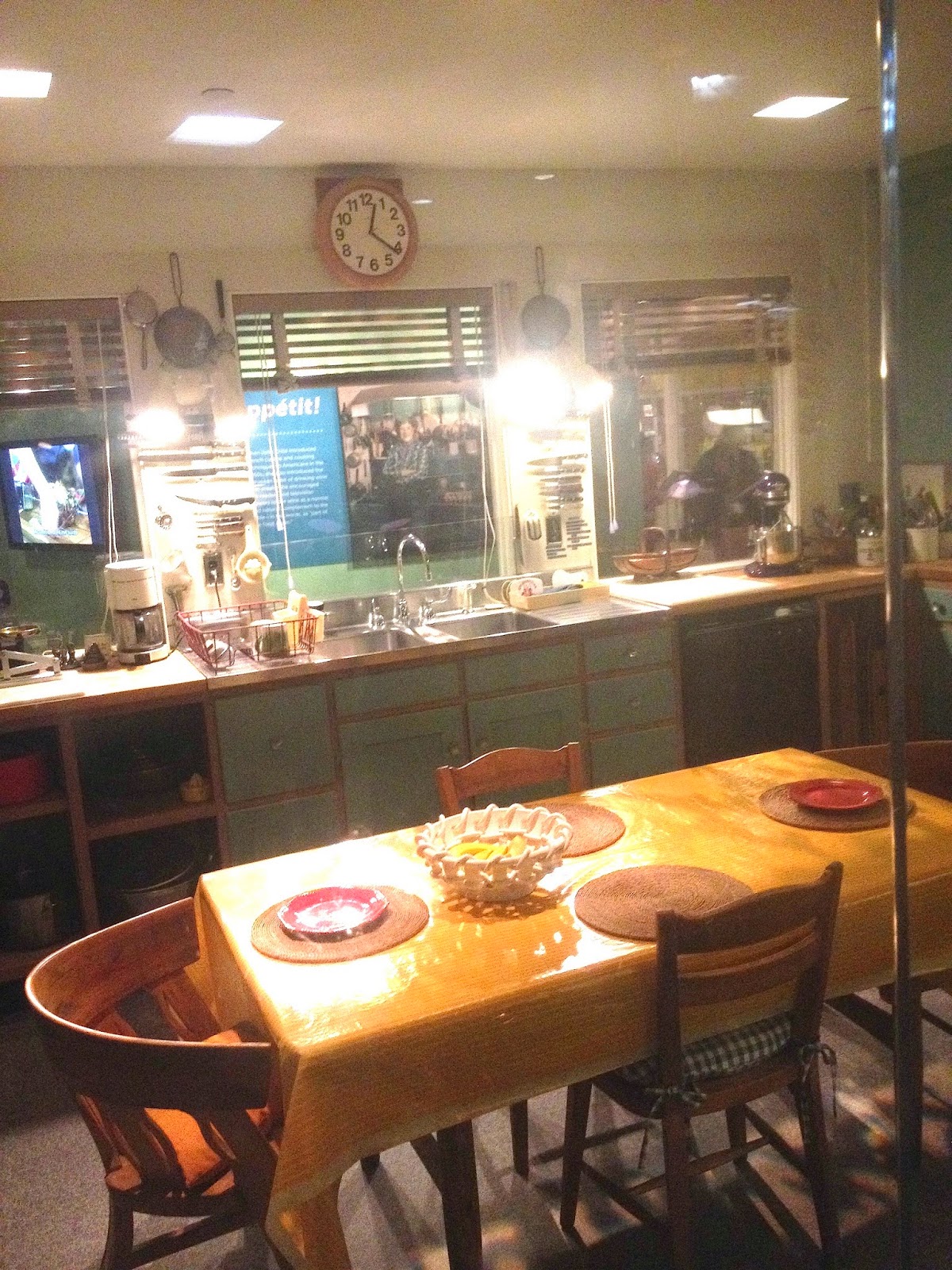 I view of the kitchen as it was in Cambridge MA 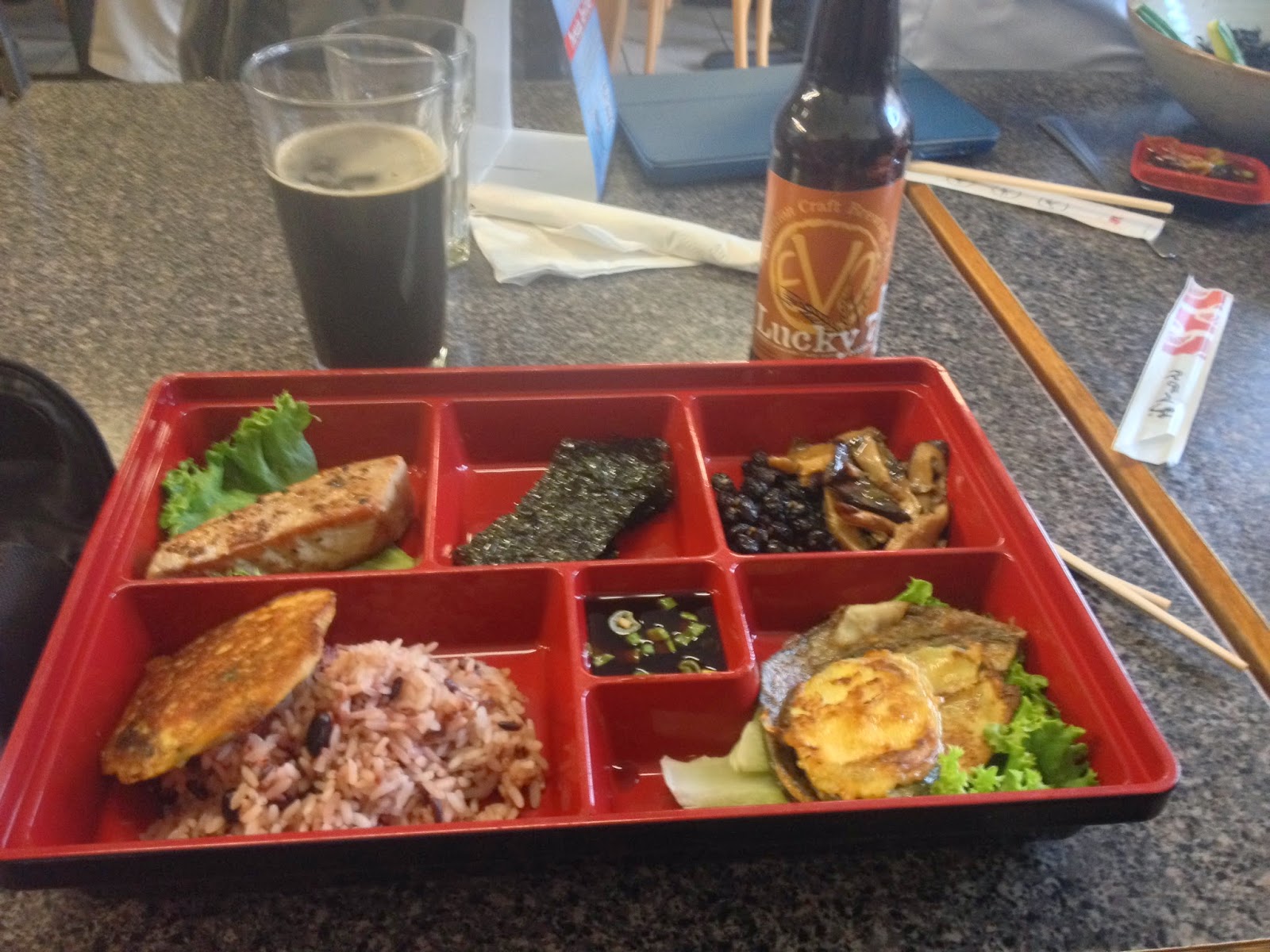 David and Paige had lived in Takoma Park on the DC side and took me too a small Korean American Cafe in downtown Takoma in MD.   A fish like box of food with a local MD porter beer.  Very sweet to have the local fare.... 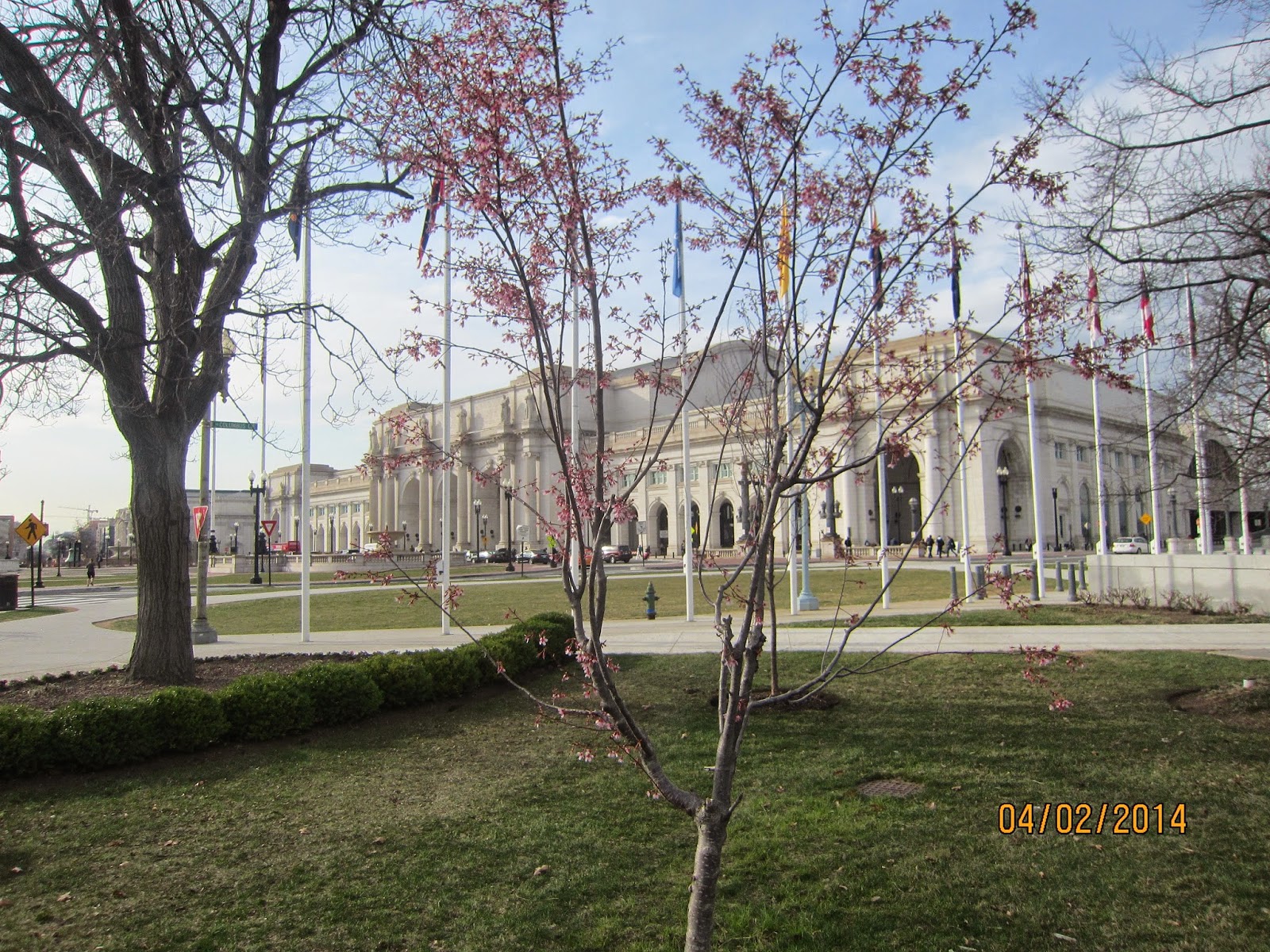 Here is a cherry tree beginning blossoming in front of Union Station as I neared David's office at the SEC Building. 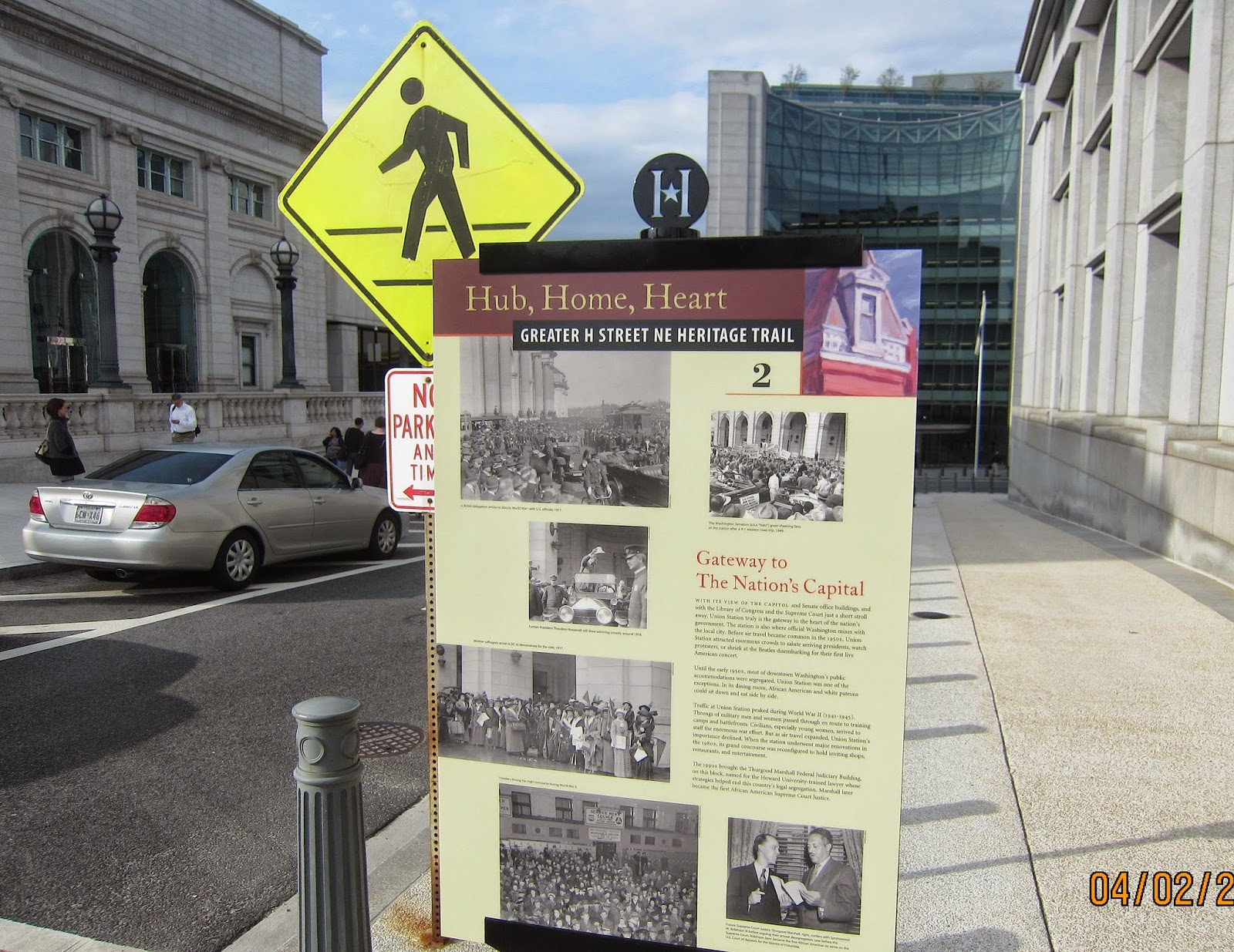 History of Union Station.  In front of Thurgood Marshall Building and then the SEC Building in the back where David, my host works. 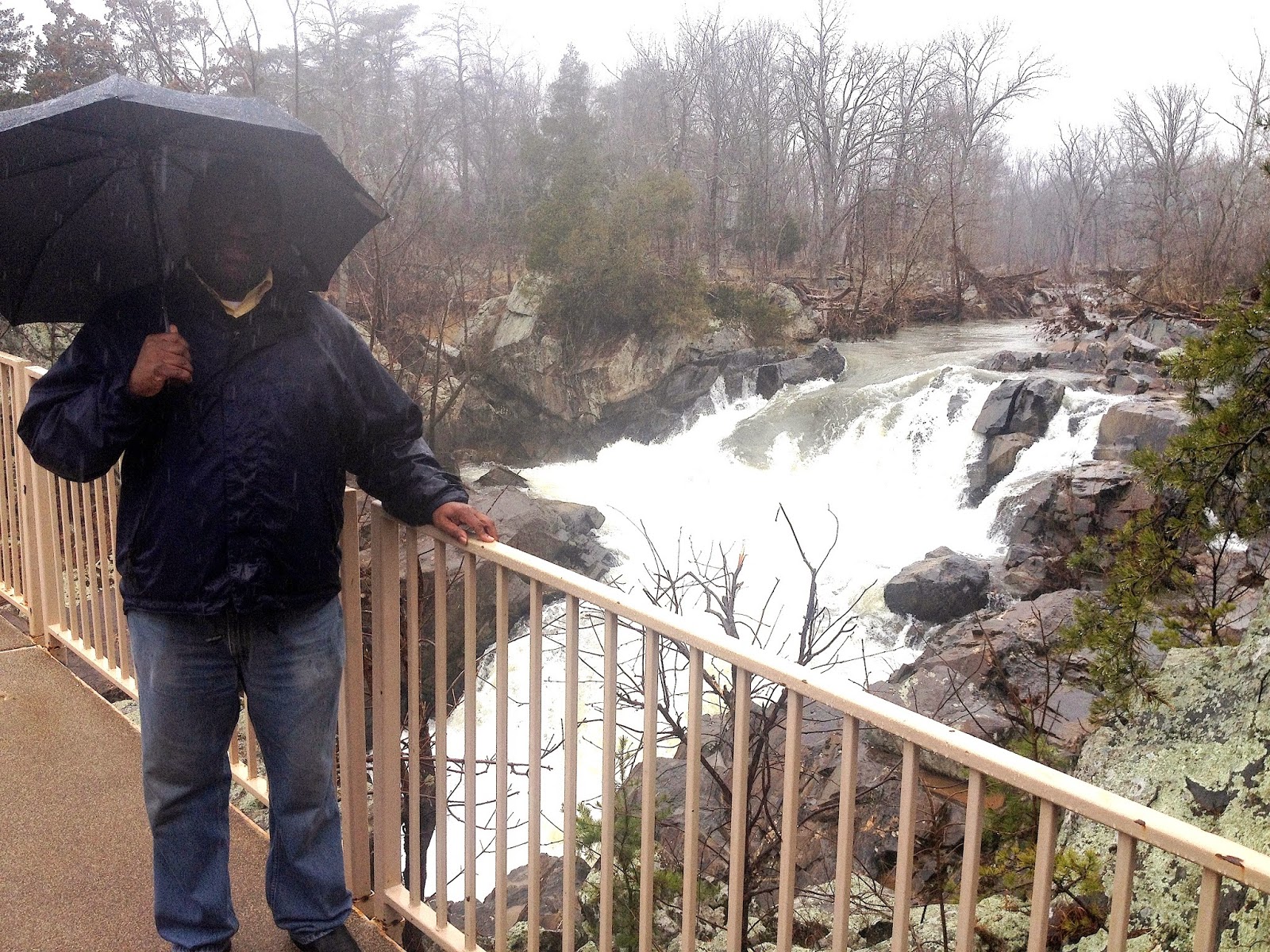 My friend Paree I know from MKP International, who promised me a special view of Washington DC.  Here he is with his great smile as we walk over the bridge on the MD side of the Potomac at the Great Falls...Thanks Paree. 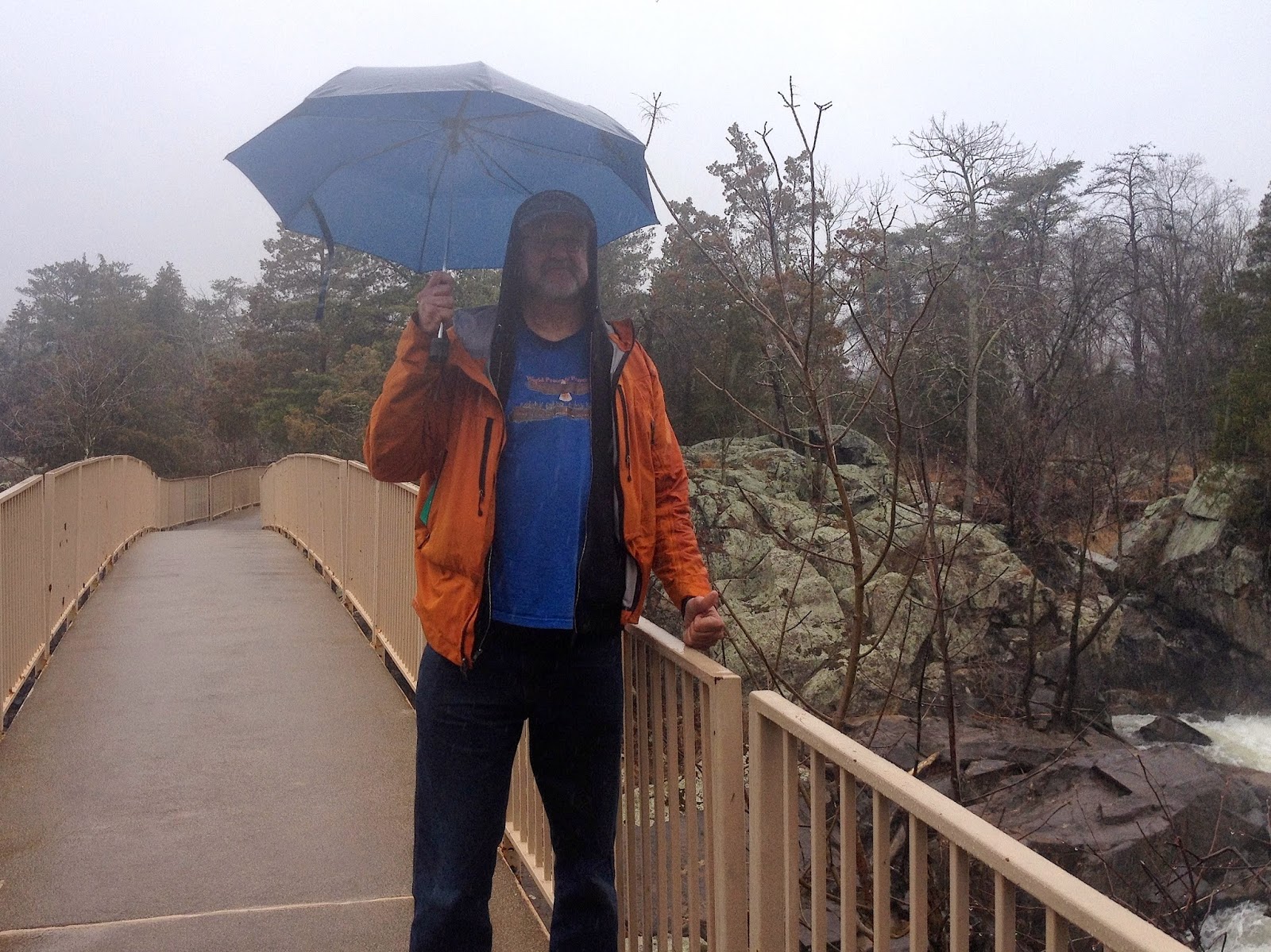 Paree's photo of me on one of the bridge at the Great Falls of the Potomac.   Olmstead Island.... 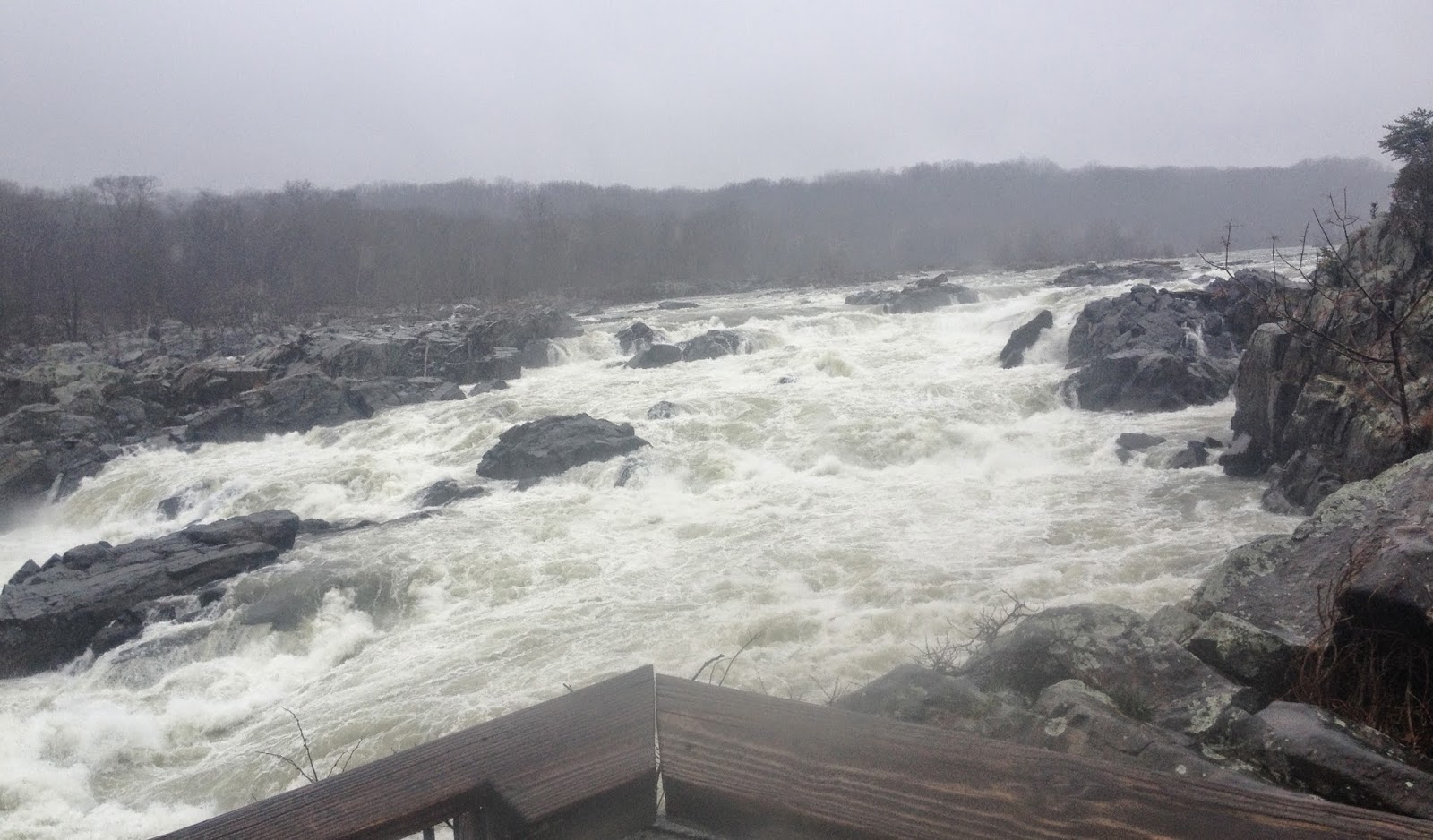 View of the Great Falls of the Potomac as led by Paree...who has lived in DC for 21 years...

DC license plate....the 3 stars and 2 stripes are part of the Washington Family Crest. 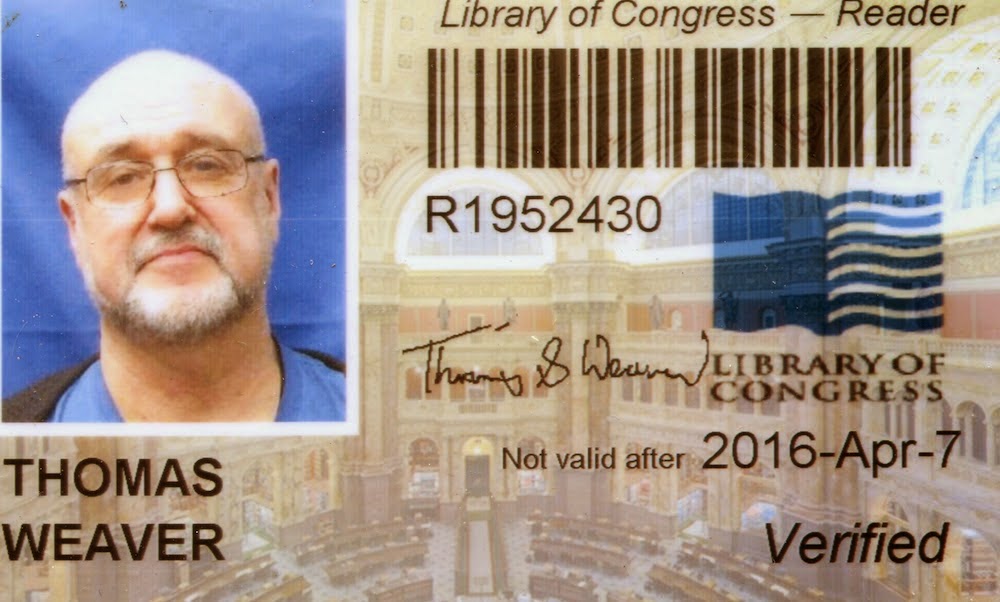 Now I can visit the Library of Congress.  Thanks to Paige for her suggestion that is might draw me back in the next two years..
Posted by Thomas Glessner Weaver at 6:58 AM