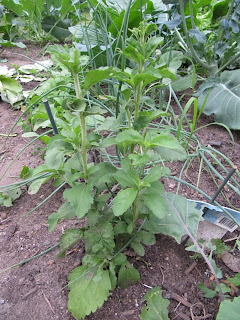 Well, I have always been interested in plants and their connection to life and health. Went to a picnic with the men in my I group, Integration Group in Roseville last evening. Pete has been working on his garden, and after marveling on its greenness, the brocolli flowers, munching on the snap peas and greens, he said "I wonder if you know what THAT plant is?" Well I looked at a foot high plant whose foliage looked like chysantemum and thought "some kind of aster-composite family plant" and then he said, try eating a leaf. THen my mind said "Stevia" as it has a refreshing sweet and thick flavor. He said "You are right!" I had always thought it was a tropical plant, so I am surprised. Here is the Wikipedia notes on Stevia:
"Stevia is a genus of about 240 species of herbs and shrubs in the sunflower family (Asteraceae), native to subtropical and tropical South America and Central America. The species Stevia rebaudiana, commonly known as sweetleaf, sweet leaf, sugarleaf, or simply stevia, is widely grown for its sweet leaves. As a sweetener and sugar substitute, stevia's taste has a slower onset and longer duration than that of sugar, although some of its extracts may have a bitter or licorice-like aftertaste at high concentrations. With its extracts having up to 300 times the sweetness of sugar, stevia has garnered attention with the rise in demand for low-carbohydrate, low-sugar food alternatives." Yes, and I have drinking it for several years in Treasure Tea, named by John Easterling for the Shipibo People of the Peruvian Amazon that led him to the healing power of the plant nation and his founding of the Amazon Herb Company. For more info, check out my link: www.drtomweaver.amazonherb.net. Health and happiness with the plant nation!
Posted by Thomas Glessner Weaver at 8:15 AM